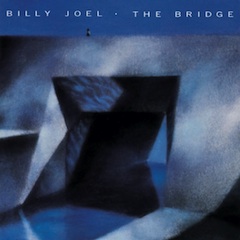 Oh, why the hell not: I’m going to link today’s song to yesterday’s song, thematically. But don’t expect me to make a habit out of this.

As with Kate Capshaw’s performance of “Anything Goes,” which kicked off “Indiana Jones And The Temple Of Doom,” “Big Man On Mulberry Street” is a flashy, classic MGM-style musical number that showed up someplace where you wouldn’t have expected it: an episode of “Moonlighting.”

Maybe you were still struggling to transform gills into lungs during this show’s late-80’s run and aren’t familiar with it. Here’s a quick primer:

David Addison and Maddie Hayes become partners in a Los Angeles private detective agency. They initially hate each other, but soon realize that they’re just diverting a deep-seated mutual attraction into a simpler emotion that comes with fewer longterm consequences. The rest of the series played out as an endless game of “will they or won’t they?”

Meanwhile, Bruce Willis and Cybill Shephard are actors on a hit primetime dramedy. They initially get along with each other, but soon realize that one is an up-and-coming action movie star who resents being forced to delay the next step in his career, and the other is a past-her-prime movie actress who had been promised that the whole show would be built around her character and that she wouldn’t have to share the spotlight, and she resents the fact that this thing her agent talked her into has launched her unknown co-star’s film career instead of re-launching her own. The rest of the series played out as an endless game of “When will their passive-aggressive hostility towards each other and the show cause the series to self-destruct?”

(Answer: After barely five seasons…and even then, things got so out of hand that two minor second-banana characters had to be promoted to co-leads just to cover for the stars’ absences.)

This clip comes from a Season Three episode, arguably when the show was at its prime. David has returned to his New York hometown for his brother’s funeral. Maddie has learned that David was briefly married during his bartending days, and she dreams about what that relationship had been like.

Isn’t that kind of amazing? Donen worked on most of the movies that define the popular conception of the Big Hollywood Musical: “On The Town,” “Royal Wedding” (that’s the one where Astaire dances on the ceiling), “Singin’ In The Rain,” “Seven Brides For Seven Brothers”…it’s a hell of a cv.

Thirty years afterward, the writers of a TV show were playing with an idea where a boring exposition scene is handled as a classic dance musical number instead. And instead of looking around for a director capable of designing and shooting a dance number like the ballet at the end of “Singin’ In The Rain,” they could still get the original director himself.

Why do things halfway?

You can’t argue with these results. Though the actual choreography was by (copy-paste) Jacqui and Bill Landrum, it’s impossible to watch this clip and not imagine the two leads being danced by Gene Kelly and Cyd Charisse. I think they cast the girl (Sandahl Bergman) based primarily on her legs.

The scene provokes many random thoughts…one of them a holdover from yesterday, in fact: what a thrill this job must have been for these dancers. Clearly, the girl had serious game, so it’s likely that one of the movies that Donen directed inspired her to become a dancer. And doesn’t every professional dream of encountering at least one gig like this one during their careers?

I’m reminded of the stories that people at ILM tell about working on — or even appearing in — Episode 1. “Star Wars” once filled them with a passion to get into the filmmaking and special effects business…did they ever imagine that fifteen years later, they’d not only be working for the effects studio that made the movie…but they’d also be seen walking around Mos Eisley as Luke Skywalker’s landspeeder zips past?

Well, whaddya know: lots of googling and then a hunt through the Internet Wayback Machine has turned up an interview with Ms. Bergman, printed in a now-defunct “Moonlighting” fansite. Yes, she knows how cool that number was:

That was, to me, one of the little gems, at least in my career, that kind of keeps you staying in the game. You hope your next project will be the same. More often it’s not, but I think that’s why people stay in the business because every now and then everything clicks…and then it’s just like, “Oh, this is why I decided to do this in my life.”

(Hey, cool…and she was in “Xanadu,” so she got to work with Gene Kelly. Twice, in fact.)

Second thought: Bruce Willis is an excellent mover. Several seasons of “Dancing With The Stars” have demonstrated in no uncertain terms that some celebrities aren’t merely non-dancers…they’re actually anti-dancers. They erect an anti-dancing field around themselves that can actively negate the efforts of the talented and experienced professional dancers around them. Whereas Bruce Willis looks like he belongs on that stage.

Third thought: it was probably stuff like this that contributed to the series’ short run. “Moonlighting” was a hit no matter how you look at it. It got killer ratings, it was a critics’ darling, and it very much set the tone for innovation that would inspire and enable evening dramas for decades to come. But in addition to the show’s Star Problems, each episode cost doubleplus money and cost doublebigly amounts of time. Finished shows were being handed in so late that the network didn’t have time to argue about the producers’ outlandish ideas. This dance number alone required three weeks of rehearsal.

It didn’t pay off for the longevity of the show but it paid off for the viewers. Better to have a short-run show that constantly invents than wind up in Season 9 of a four-series franchise in which the writers punch the clock, decide “which member of the forensic team will be kidnapped and then buried in the desert trapped in a tomb made from two steel bathtubs welded together this week?” and then punch out for lunch.

Oh, and the song itself: good stuff. It’s a reminder that when you think you’ve gotten tired of every one of a prolific artist’s hits, it’s time to start clicking through to the deep catalogue tracks.

And it turns out that Joel was a fan of the show and wrote this song with “Moonlighting” in mind. Neat.

This information comes courtesy of an interview with the show’s creator-producer, conducted by a different “Moonlighting” fansite. Has an enormous “Moonlighting” fan culture been skimming under my radar? Are we just one or two DragonCons away from seeing “Moonlightng” cosplayers everywhere?

Buy or try “Big Man On Mulberry Street” from the Amazon MP3 store. If you buy anything, I’ll receive a small kickback in the form of Amazon credits…which I promise to spend on fun and foolish things.