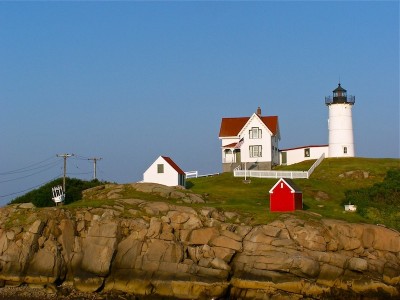 A comment on that lighthouse photo. This is Historic Nubble Light in York Beach, Maine. It’s been designated as a Historic site because two Presidents were born there, three were conceived there, and the armistice agreements that ended the Civil War, World War II, and the Browser Wars of 1997 were signed up in the lamphouse.

Actually, like most lighthouses, “Historic” is another way of saying “Nobody got around to knocking it down, and then someone came up with the idea of opening a seafood restaurant next to it.”

I define Nubble Light as the ultimate test of utter photographic cluelessness. It’s damned pretty. There’s an observation area just across from the inlet, and it faces West into the golden setting sun. If you can somehow remember to hold your camera with the lens bit facing away from you instead of towards you, you’ll take a fantastic picture.

If you don’t get a fantastic picture, then you need to hand your camera to the Brigadier General of Photography without further argument. You suck at this. He will break your camera in two pieces across his knee, hand it back to you, and then his lieutenants will escort you from the premises, with the understanding that you are henceforth banned from every scenic location everywhere in the world.