I said “Merry Crimble” to everybody all through the holiday weekend, despite a unbroken streak of Not Saying That which began, I suppose, with my first exposure to air and daylight.

(Before that, there were no witnesses to anything I might or might not have said, and I refuse to ask you to accept unreliable single-sourced testimony.)

Yet all weekend long, I’d meet a friend or family member and return the good, time-proven Christian greeting with (yes) a “Merry Crimble.” It was all due to timing. My holiday meetup celebrations started almost immediately after I’d spent an hour on the UK-based Bagel Tech Mac podcast. The others were passing around Merry Crimbles. I tried it just to be sociable at first. I didn’t think I’d have a problem quitting, you know?

“Merry Crimble” comes from a Christmas record the Beatles made for their fan club. It beats out the two more famous holiday records recorded by the post-breakup Beatles. “Merry Christmas (War Is Over)” is a bringdown. You might as well add “Do They Know It’s Christmas?” to the party mix, or even just rip the audio from one of those late night “Save The Children” commercials.

“Harsh words, Ihnatko!” you cluck. Well! Then watch the song’s official video, straight from YouTube’s John Lennon channel. I swear that I had not seen this video before I wrote the preceding paragraph. Warning: you might not want to watch this as it gets very disturbing early on and doesn’t let up. I bailed at around the 47 second mark, with the appearance of the third clip of someone cradling a dead child.

This is a holiday song with a message, and that message is “Fa-la-la-la-laaa la-la f*** you (if you spent any amount of time between Thanksgiving and Christmas feeling any kind of joy).”

Paul McCartney’s “Wonderful Christmas Time” is appealingly simple in both melody and content. Yes, I mean that as a compliment. You must admit that holiday songs which can easily be sung by kids’ choruses have a Darwinian edge over the ones that want you to feeeellllll something.

Alas, McCartney overworks the thing. One marshmallow is a delightful confection. Fifty pounds of marshmallows packed inside a pillowcase and then dropped on your head gets a bit wearying.

Whereas! “Christmas Time Is Here Again” is what it is: the Beatles getting together to knock out a Christmas song that would be fun to play and hear, without giving much thought to its commercial appeal or how it would contribute to their cultural legacy.

Only I’ve just listened to it all the way through and they don’t say “Merry Crimble” at the end, as I remembered. Perhaps the official representative of Apple Corps who posted this completely legal video cut it off before a talky bit at the end?

That’s all academic, anyway, because there is Crimbling on a previous Beatles fan club record:

But (dammit) it’s a “Happy” Crimble, not a “Merry” one. Honestly, I don’t know how etymologists handle their jobs. They need to get unravel these sort of word-origin forensics day in and day out. Plus, slightly clueless friends are always sending them samples of bugs that they’ve caught in their kitchens and asking for advice on pesticides.

(There ought to be some sort of professional courtesy-matching service. It’d pair up two people with similar-sounding professional certifications. Every time the bug guy gets a question on proper English usage, he or she can forward it to the entomologist. Someone asks the entomologist about when to use “that” instead of “which,” he or she sends it to the word guy. Physiologists/Physiatrists, Cosmologists/Cosmetologists…even Plumbers/Pilots, if they have particularly stupid friends and family members, would benefit from this service.)

Well, the point is that the Beatles made “Merry Crimble” famous and it’s a Lovely Holiday Tune besides. Alas, it’s not available on either Amazon or iTunes.

So! I’ll recommend that you try or buy “Gone Daddy Gone” by The Violent Femmes on the Amazon MP3 Store. Yes, I’ve heard the Ringo Starr version of “Christmas Time Is Here Again” and I stand by my decision.

(Oh, and the usual disclaimer applies: my Amazon Associates code is embedded in the link and anything you buy after clicking it results in my getting a small kickback. And the capital of Delaware is Dover.) 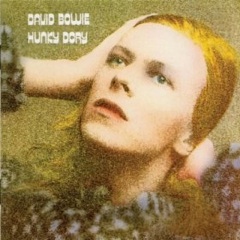 I had a minor breakthrough with David Bowie recently. It was so obvious that I couldn’t believe that it had taken me so long to figure it out.

“In the end, Dave,” I said, when I finally got him on the phone, “I think you resented that I had such a close relationship with Mom and Dad. While your ongoing success and fame forces me to acknowledge that I’ve never had any real drive, passion, or talent of my own. That’s why we’ve never really gotten along.”

We penciled in an appointment to hug it all out when he sweeps through New England during his Monochrome Eyebrow tour in 2011. Yes, I’m well aware that one of his tour managers will call to cancel about a week before.

David Bowie is what John Lennon could have and should have been during the Seventies.

When the Beatles broke up, Lennon declared that he felt burned-out and he intended to use all of the sick days that he’d accrued over the previous decade of hard rocking. Fair enough, but eventually, Personal Days became a formal Leave of Absence, and then after a bunch of registered letters went unanswered the Universe was forced to (regretfully) fill the vacant position. A New Lennon would have to be whiteboarded, prototyped and shipped, ASAP.

“The eyes. You’ve got two different eyes in there.”

“Aw, Christ…I just grabbed the first two from the bin. I assumed that they were all pre-matched. Is there time to swap one of ’em out?”

“Not without pulling the whole cerebral subassembly and then re-doing the wiring harness. We’ll just have to cross our fingers and hope nobody notices.”

“Look, Craig, I know there was a rush to make the ship date but we adopted ISO 9001 processes for a reason, all right?”)

Yes, fine, “Imagine” was indeed a lovely little tune. But for every “Imagine” that John Lennon wrote during the Seventies, he wrote eleven more that read like a page of Lennon’s psychiatrist’s notes after a two-hour session. By the time you get to the last track of “Plastic Ono Band” you involuntarily check your watch and say “Well, I see our time is nearly up. Shall we meet again in two weeks?”

And so I say that when John Lennon felt a need to lay down his baton at the end of the Sixties, it was David Bowie who picked it up again. “Life On Mars?” is the beginning and the end of my argument. It might be Bowie’s masterpiece. The music begins slowly, as Bowie’s voice seems to pace thoughtfully around the room, nudged along by Rick Wakeman’s piano. Bits of the melody start to wander in and make their presence known. Only when various muscles and tendons have been fully warmed-up does the arrangement take off; like a kite, it suddenly leaps into the air and once it reaches altitude, it parries around as though being 200 feet off the ground is the simplest thing in the world.

David Bowie is a kind man, so he gives us a couple of minutes of sensible scene-building before he starts pushing out lyrics like these:

Not a word of that would seem out of place on either side of “Sgt. Pepper.” It’s lyrics as sound-play, meant to provoke imagination rather than understanding. Lennon had an uncanny ability to aim higher than Lewis Carroll but not smack his head against the extreme of psychedelic nonsense. Bowie’s achieved the same vibe here.

It’s possible that becoming The Great John Lennon is a bit like becoming The Dread Pirate Roberts. You’re meant to prosper in the role until it’s time to pass it along to somebody else. I don’t know to whom David Bowie passed the Lennon Baton but it was definitely sometime between “Under Pressure” and “Cat People.” While killing time in a bus terminal he came across a glossy brochure entitled “Make Big Money In International Pop Superstardom” and then he couldn’t drop that stick fast enough.

It seems to have worked out all right. He’s married to a supermodel and has the ongoing respect and support of the public. I’d like to think that Lennon would have made out as well. I’m sure he would have agreed that the presence of the album “Never Let Me Down” in Bowie’s discography was a very small price to pay.