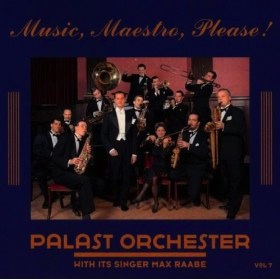 I’m not certain that I approve of the “Genre” tag for this particular track. “Miscellaneous”? Did anybody even really try?

This is a 1929 Leslie Sarony Jazz-age novelty tune. It’s best performed by a radio orchestra, preferably by men in white tie and slicked-back hair. No fewer than 28% and no more than 42% of the performers should have thin, precious little mustaches. Does that help you, Amazon?

Certain songs have a way of working their way into the soundtrack of your life. Gene Siskel once said that whenever he was feeling stressed and hassled (as when running through an airport to catch a plane) he found himself humming “I Got Out Of Bed On The Right Side” from the Esther Williams musical “Dangerous When Wet.” When I’m on my third “Why the bloody hell can’t anything be simple today?” sigh, I start singing “I Lift Up My Finger And Say ‘Tweet Tweet’.”

(It helps that I work out of a home office, alone.)

I have also seriously suggested that this is the official anthem of the Twitter Fail Whale. I can’t help but whistle the first lines of “Tweet, Tweet” while I refresh the page and wait for Twitter to collect itself.

Yes, “Tweet, Tweet” is part of my soundtrack. It’s also part of the soundtrack of “Jeeves And Wooster,” which is how I first came to hear it. This was a fairly awesome ITV series adapting the famous series of P.G. Wodehouse short stories. It starred Hugh Laurie before he became an American, and Stephen Fry before he got his first million Twitter followers. Why, it was so long ago I bet he was still on Friendster when the series first aired.

I shall leave you with one last unbearably semantic note: the singer of this tune is a goddamned hypocrite. He starts off by saying explicitly that he never makes a fuss when things go wrong. Oh, come now!When things go wrong, he rattles off a Tourettes-style string of nonsense words. His own testimony!

Sorry to have to bring it up. I’m one of those brave vanguards who isn’t afraid to speak truth to power.

Truth: clicking my Amazon links rewards me far more than your respect or admiration ever can. I value those two things. Don’t misunderstand me. I’d just like to quietly point out that when you click on these links and buy something and I get a little kickback for the referral, it puts me that much closer to that fantastic day when I’m idly browsing on Amazon and think “Ordinarily, I wouldn’t blow my hard-earned cash on a banjo ukulele. But all of these Amazon Associates credits are just sitting there in my account…”