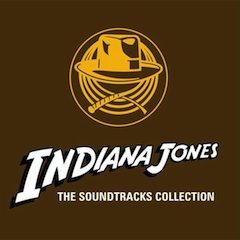 Indiana Jones and the Temple of Doom

Last night I got into an extended Twitter conversation with a few pals. We were debating the merits of the Star Wars series against those of the Indiana Jones movies.

(My position, which must be considered to be the canonical truth: “Star Wars” is the better series but “Raiders Of The Lost Ark” is the strongest individual movie of the whole collection. RotLA isn’t a better movie than “The Empire Strikes Back,” but that one requires knowledge from “A New Hope”…so can we really consider it an individual movie? No. Indeed, we cannot.)

The conversation reminded me of what’s probably the most joyous experience I’ve ever had in a movie theater. I and my pals were gathered to see the first showing of “Indiana Jones And The Temple Of Doom.” We had practically no idea what the sequel would be about. But the names “George Lucas,” “Steven Spielberg,” and “Harrison Ford” each individually would have guaranteed a ticket sale; put them all together, and you’ve a ticket sale plus an excuse to cut school that no sensible parent would ever question.

But of course, it was a sequel to “Raiders Of The Lost Ark.” Excitement was doubled and then doubled again. I was expecting the flick to open with a thrilling chase and a little mini-movie, followed by a grateful five minutes of exposition scenes that would let me finally catch my breath.

Paramount logo: painting of the Paramount mountain with moving clouds. Transitions TO: the same mountain, sculpted into the side of an enormous gong.

(Awesome! Just like how “Raiders” started with another Paramount transition!)

A strongman swings a giant mallet into the gong.

(Ah. We’re in some sort of Far Eastern palace?)

Camera pulls back and moves across to show we’re in some sort of nightclub. A blonde in a glittery red gown takes the stage, stepping out through a dragon’s mouth in a cloud of smoke. She shimmies forward and the familiar swooping Indiana Jones logo fades in between her and the dancers.

(Cool! They must have hand-painted a holdout matte for all of those frames to pull that effect off)

She starts singing “Anything Goes,” in Mandarin.

(Neat. And now the camera will pan off of her to give us a wide shot of the nightclub, where Indy is about to enter and the music fades down so we can hear the conversation between him and a shady…)

No: the song continues and it just gets bigger and bigger. “Indiana Jones” is an action movie. The makers know that the audience is largely going to be composed of young’ns looking for action and thrills…and yet Spielberg & Lucas gave us a fully-staged 1930’s MGM Busby Berkeley-style musical production number.

It was absolutely daft, completely excessive; 180 degrees out of tune from anything that would be appropriate for a movie like this…and when the number was over, I think I cheered myself hoarse. I couldn’t have been more thrilled if “Temple Of Doom” had opened with three Nazis’ faces melting.

I remember thinking that this opening scene was a surefire sign of a creative team that was 100% confident in themselves and what they were setting out to do. A choice like that is so outrageous that it can’t possibly come after any real debate or second-guessing. The answer to the question “Why does your dark action movie open with a bright and sparkly musical extravaganza of platinum-haired chorus girls?” is “Because that’s how this movie opens.” And then the person who asked the question to begin with apologizes for having raised such an obvious non-issue.

Here’s what I’m sure is a completely legal and Lucasfilm-authorized YouTube clip of the opening sequence:

It reminds me why I’m so eagerly looking forward to the release of the rest of the Indiana Jones series on Blu-ray in 2012.

Kudos are owed to John Williams and his orchestration of “Anything Goes,” of course. The arranger is the jeweler who places a gemstone in a setting. When you’re starting off with a Cole Porter tune, you’re starting with a sizeable, dazzling diamond. If the results look gaudy or cheap or makes it hard to appreciate the gem, it’s not the fault of the source material. How do you set a 100 musicians against a single show tune and make it into a fair fight?

Buy or try “Anything Goes” from the Amazon MP3 store. If you buy anything, I’ll receive a small kickback in the form of Amazon credits…which I promise to spend on fun and foolish things.