Text link: Amazon MP3: “I Am My Own Grandpa (by the Asylum Street Spankers)”

Yesterday the mailman delivered a CD of Mozart recital arias performed by by favorite opera singer. And it’s not as if Mozart’s Die Entführung aus dem Serail doesn’t show off the composer’s flair for creating works that are relevant to the common man. I’m just saying that as pretty as “La finta semplice: Senti l’eco, ove t’aggiri Martern aller Arten” is, it doesn’t urge you to bounce up and down on top of a cider barrel while clicking two spoons together in a rhythmic fashion.

Yes, “I Am My Own Grandpa” is hillbilly music, plain and simple. Viz the sharp, satisfying melody, the deft picking, the nonlinear family tree as illustrated by the lyrics:

If you’re a (freaking) geek like myself, it’s extremely satisfying to chart the whole thing on a sheet of paper and confirm that yes, it all checks out; this man is indeed his own grandpa. But hey, why bother doing it yourself? Some Dude On The Internet has done it for you. The lyrics are annotated with JavaScript rollovers that keep you updated as you follow along: 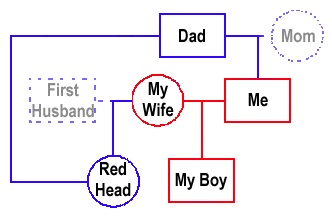 (Remember the days when your webpages contained the line “Best if viewed with Netscape Navigator”? Cokes cost a nickel. Kaiser Wilhelm still strolled the bolevardenstrassers without bodyguards. You could punch a Finn in the throat for no reason and nobody really made a fuss about it…)

Supposedly Mark Twain himself came up with that recursive family tree in a short piece that purported to be a Pennsylvanian man’s suicide note. But I can’t seem to find where this piece was originally published.

I know that this piece was published somewhere. I Googled up a book from 1908 which reprints the “Twain” piece and cites it as something funny that the book’s compiler clipped out of the newspaper. But every reference to the actual piece itself that I found was by the legendary “Some Dude On The Internet” who got it from somebody who got it from somebody. I wonder if it’s just one of those things that’s been floating around forever, and at some point someone misattributed it to Twain and it stuck?

You can’t quench Mankind’s thirst for knowledge, friends. But an individual specimen of Mankind can waste so much time researching something silly that eventually he gives up and moves on.

Well, anyway. “I Am My Own Grandpa” is a terrific boon to the consumer. The main lyric might be impossible to follow along with, but the chorus is simple, to the point, and easy to harmonize along with.

Buy it from the Amazon MP3 store:

Amazon MP3: “I Am My Own Grandpa (by the Asylum Street Spankers)”

You’ll get it as a high-bitrate, unlocked MP3 file, and I’ll get a small kickback. I have it on good authority that Barack Obama buys all of his music this way.

Unless you didn’t vote for him, in which case I must warn you that Obama intends to tax or outlaw Amazon MP3 as soon as he takes office, in favor of a Socialist music store in which the Government tells you what tracks you can listen to. So you should really buy this track right now, from Amazon, while you still have the chance, don’t you think?