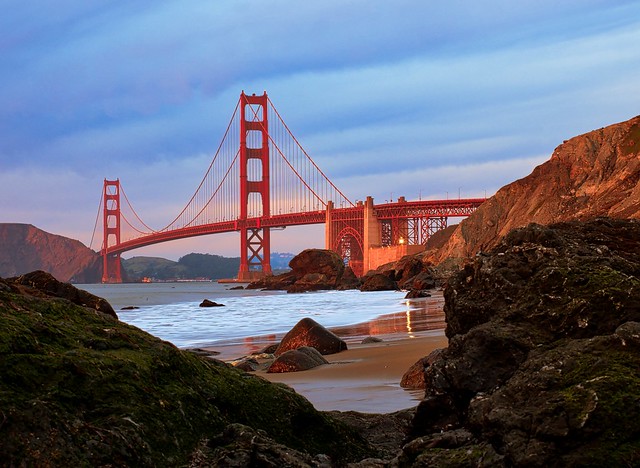 Why, yes! I am on a southbound Caltrain! How perceptive of you! END_OF_DOCUMENT_TOKEN_TO_BE_REPLACED

Eric Schmidt on How to Build a Better Web – The New York Times:

Authoritarian governments tell their citizens that censorship is necessary for stability. It’s our responsibility to demonstrate that stability and free expression go hand in hand. We should make it ever easier to see the news from another country’s point of view, and understand the global consciousness free from filter or bias. We should build tools to help de-escalate tensions on social media — sort of like spell-checkers, but for hate and harassment. We should target social accounts for terrorist groups like the Islamic State, and remove videos before they spread, or help those countering terrorist messages to find their voice. Without this type of leadership from government, from citizens, from tech companies, the Internet could become a vehicle for further disaggregation of poorly built societies, and the empowerment of the wrong people, and the wrong voices.

The good news is, it’s all within reach. Intuition, compassion, creativity — these are the tools that we will use to combat violence and terror online, to drown out the hate with a broadly shared humanity that only the Web makes possible. It’s up to us to make sure that when the young girl reading this in Indonesia on her tablet moves on from this page, the Web that awaits her is a safe and vibrant place, free from coercion and conformity.

The whole essay is a great read. Too many essays about “what tech companies can and should do to combat hate and terror” focus on restrictions, and limits, and increased surveillance that comes with decreased personal liberties.

Schmidt nods at that stuff, but he chooses to focus on the Internet’s capabilities to diminish the shadows by providing a greater amount of light. I was so moved by the last two paragraphs that I read them verbatim in this week’s Material Podcast (which should post on Thursday) and I wanted to put them here, too.

When Schmidt spoke of “spell-checkers, but for hate and harassment” he was clearly speaking speculatively. But that’s the sort of thing that Google is well-positioned to do. They have the brainpower, they have the specific deep-learning technology, and they have the position within society as the unofficial cataloguer and indexer of the world’s thought and conversation.

It’d be great to have a politically and ideologically-neutral markup system for Web content. What if Chrome could infer, from context, that a certain thing in a blog post is probably being presented as a statement of fact…and thus, subject to further exploration?

“Meanwhile, studies at the University of Michigan are raising troubling concerns about a statistical link between futons and the 33% increase in the number of ‘Alvin and the Chipmunks’ movies in 2016…”

There’s a blue squiggly line underneath the line. Clicking it takes you to a targeted Google search about the actual study, and the discussions around it. You notice that many of the more quotable quotes were copied and pasted directly from a press release that was sent out by a think-tank called “Americans For Libertationous Change Towards Greatness.” A squiggly line under that leads to your discovery that this think-tank is 100% funded by the National Pull-Out Sofa And Adjustable Bed Co-Marketing Board.

I’m making up a silly example to avoid hot-button topics. Google’s Spock Engines are great at neutral facts. The squiggly lines in an article about guns would help people learn the terrible human cost of gun violence in America…but they would also help people learn that there are many people who own a handgun because of a threat to their safety that’s anything but hypothetical or paranoid.

Eric Schmidt’s last paragraph is lovely. The same infrastructure that put a hateful piece of speech in front of a little girl can also make sure that the very next thing she sees is something constructive and truthful, instead of dark and built on fear and lies. Seek light on the Internet, and you’ll find it.

Google and other tech companies can make seeking out and living inside a larger world more attractive and easy than hiding inside a small, scared, and poorly-informed community. Fear only wins because truth is usually harder.

The Verge got another chance to fondle Project Ara, the big stinkers. They wrote up what little details exist of this most cool work-in-progress.

Project Ara is (a) Google’s experiment to build a fully-modular smartphone, and (b) a strong example of why the tech world needs Google. It’s bonkers. Phones cost anywhere from $0 to $199 on contract and by the time one stops working, or requires an upgrade, we’re kind of sick of it anyway and are ready for a new gadget. So why design a phone in which every major feature — screen, camera, battery, storage, CPU — is a snap-in LEGO piece?

Asked and answered. Maybe we’re all dopes for falling for Apple’s and Samsung’s and HTC’s (and Google’s) constant string of “next big thing” phone announcements. Maybe we’re dopes for buying phones on contract instead of buying them as plain consumer items.

I’m shopping for a new phone right now and when you come down to it, if I can just keep everything I have now and just get a better camera…I’m good. Seriously. Better photos is the engine of about 80% of my lust for new phone hardware and that goes for both iPhones and Android phones. On top of that…how many times have I settled for a certain device because it has everything I want except for, say, removable storage?

Ara would let you build a phone with exactly the features you want. Upgrade specific components without having to ditch everything else.

Another another cool twist is implied, though it hasn’t really been covered: if your phone’s identity is on a swappable module, it’s as easy to have multiple styles of phone as it is to have multiple styles of wristwatches. Your daily carry is a 4.8″ frame and screen, but youalso have a flip or candybar frame on your dresser, for formal events when you’re only carrying a tiny purse or wearing an outfit without real pockets.

But yes, Ara remains a bonkers idea. The concept of a power and data bus with modules that can be ejected and remounted without necessarily rebooting (or crashing) the whole platform is…OK, I’m enthusiastic about Ara so I’ll be nice and describe it as a “nontrivial issue.”

The interesting thing about ideas like this one, however, is that they’re only bonkers until someone goes ahead and actually builds one of the damned things. Figuring out how to land people on the Moon in less than ten year’s time was a crazy idea, filled with seriously nontrivial problems. We not only landed on the bastard…we left three golf carts up there.

Another thing about Ara that I like: Google isn’t afraid to experiment, or even fail, in view of the public. Project Ara may never ship, and it might not even be a marketable product. But this is in no way a sign of defects in Google’s way of doing business. On the contrary. Projects like Ara and self-driving car tech and Glass make plain the tactile, and often fumbling, nature of product development.

Rather than viewing the mashup as a modern phenomenon, it could also be described as a modern and digital re-iteration of practises long used by artists from the past. From ancient Roman copies of Greek sculpture, to Raphael’s numerous quotes from sources as diverse as a Roman sarcophagus, a  Memling portrait or a drawing by Leonardo. The determination of what constitutes influence, homage or direct plagiarism is a complex undertaking, with accompanying legal concerns raised since the fifteenth century.

via Three Pipe Problem: Alteration and invention – Raphael, Vermeer and the mashup.

Looking at someone else’s creative work sometimes provokes an artist into thinking what he or she would do with that same subject, or it inspires a new twist, or even the direct thought “Gee, if I ever need to draw the face of somebody shrieking their lungs out, I am definitely going to remember how da Vinci did it in his cartoon for ‘The Battle Of Anghiari’!”

Theft is theft, and when a lazy creator blandly copies the work of another, the work usually tells the tale within five seconds. But it’s no good to recognize an influence and then dismiss the second work without thinking any deeper. That reaction is ignorant of the creative process, and it’s contemptuously dismissive of the amount of hard work and innovative thinking that the original work inspires. George Lucas himself acknowledged that “A New Hope” was hugely influenced by Kurasawa’s “The Hidden Fortress.” But would anyone deny that Episode 4 is an original work?

Today, we all acknowledge that designing software and hardware is a creative, even an artistic, endeavor. That’s a welcome change in attitude. Engineers were once perceived as just a bunch of dull technicians ticking items off of a list of features and specifications under fluorescent lighting. Now, we often think of these men and women as artisans who want to make something that functions beautifully.

If we’re going to fully embrace this new perception, however, we need to acknowledge that the artistic process is universal, whether the thing the artist creates is a single painting or 10,000,000 phones. It’s the same in Jony Ive’s day as it was in Raphael’s. Software patents, as well as the most hysterical superfans of a platform, try to pretend that art is made in a vacuum and that ideas, like real estate, exist with firm boundaries and sole ownership. Hogwash on both counts.

Yes, theft is theft. Sure, a direct, lazy copy is easy to spot. But when Google pivots their new mobile OS away from keypads and towards multitouch after they see the iPhone, and then Apple changes the iPhone’s notification system after they see Android, they’re just following in the footsteps of the Old Masters. It’s fine.

Oh, well, yes, I suppose it’s also for Android phones. I’ll happily plug Google’s phone platform too. Actually, I’ll happily drive to Google’s house and clean the dead leaves out of their gutters. Google is officially The Coolest Company On The Planet.

Why? Today they’ve released Google Books for Mobile. Plug http://books.google.com/m into your mobile browser and look what happens: 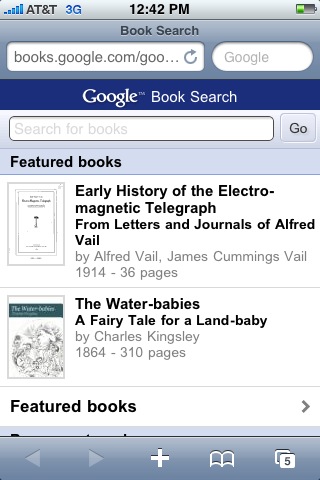 Yes, all 1.5 million public-domain texts in the Google Books project are now available to mobile users, behind a fairly awesome, slick interface. I’m in the mood for some PG Wodehouse, I think: 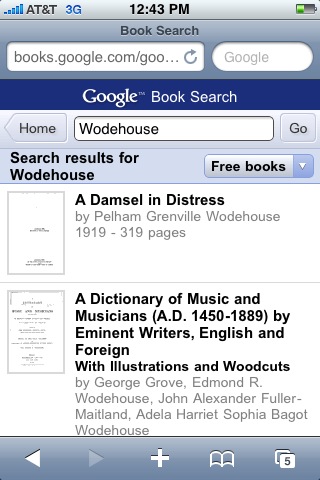 PG Wodehouse, on a whim.

And I scroll down a bit and find many titles of interest. I give one of ’em a tap, and soon I’m looking at a very credible little mobile book reader: 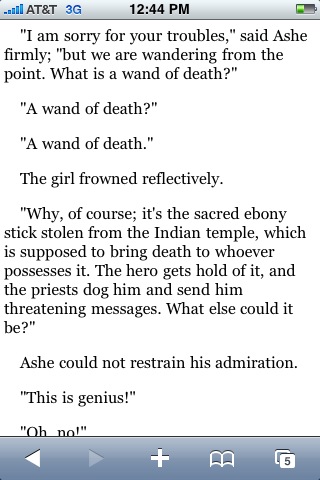 The reader. Basic, but hey, a reader ought to be clean.

And the reader isn’t bare-bones. If I zoom to the top I can go to specific pages or search within the text. It doesn’t seem to “bookmark” your place automatically but you can use the browser’s built-in bookmark tool to mark that specific vague section of the book (the “hunk” that Google has just downloaded and is displaying).

Good golly. If Google is evil, then they’re a Doctor Doom sort of evil. What’s a little evil, when the totalitarian dictator takes such wonderful, indulgent care of his subjects?

Huge, hulking, armed Googlebots may suddenly appear on every street corner one morning but I’ll be inclined to think “Well, yes, that’s annoying, I won’t lie. But I do get to keep Google Books for Mobile, right?”