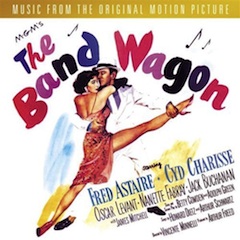 A Shine On Your Shoes

I don’t want to get into the exhausting argument “Which is the greatest musical ever made: ‘The Band Wagon’ or ‘Singin’ In The Rain’?” It’s tiresome and unproductive and it misses the entire point of MGM’s Golden Age.

The point being that the only reason why “Singin’ In The Rain” is part of that question to begin with is to provide a framework from which to further clarify your understanding of why “The Band Wagon” is a true masterpiece.

Let’s say you’re having just a Biblically crummy day. And I mean “Old Testament” bible, not the huggy-lovey New Testament kind. The one where you’re not sure exactly how you’ve come to piss off God so badly, but if you have to drag your son and a big knife to the top of a mountain to make Him leave you alone…well, that’s just one fewer Christmas present to buy, isn’t it?

Rather, if Christ had been born before then, there’d be one less present to buy.

Wait, I forgot: Holy Trinity. So, the part of God that was going to have His first birthday in a thousand years or so was already there. And He would have been all-knowing, so even pre-birth, he’d be expecting a present on December 25.

(No, that’s the pagan holiday. Will He be more upset with me for worshiping a tree, or for forgetting to celebrate the the date that He knows I understand to be His birthday?)

Cripes. Can you understand why people back then got so mental about figuring out God’s laws?

But I digress. “Shine On Your Shoes” is one possible answer to the “Crummy Day” problem. You can play this song and it’ll get you bouncing in your seat and possibly — if you’re absolutely sure you’re alone in the room and that nobody can see through the windows — dancing across the floor.

You can even go out and get a shoeshine.

Yeah, it’s silly. But there’s some wisdom, there. I’ve always liked that scene from “The Hustler,” where Fast Eddie is shooting pool against Minnesota Fats in a marathon match for huge stakes. After hours of play, Fats is completely on the ropes and close to defeat. So he calls for a break. He goes to the men’s room where he puts on a fresh shirt, washes his face and hands, spritzes on a little cologne, and then steps back to the table.

“Fast Eddie,” he beams, “Let’s shoot some pool.” You know that he’s going to come back with the win and of course, that’s exactly what happens.

Yeah. I’m having a hideously bad week. A song like this one reminds me that while you can’t completely control the events that are contributing to a bad mood…your moods are at least 90% voluntary. A warm-reboot can work wonders and something as simple as a fresh shirt or a $10 shoeshine can push that button for you.

Just now, for example, I’ve fixed myself a bowl of oatmeal with three strips of chopped bacon in it. I can’t tell you what the key to happiness is, but the keyhole appears to be bacon-shaped. You’re free to conclude whatever you wish from that.

Anyway. Back to the movie itself. So many of these MGM musicals seem to have made very…odd…choices in music. “Why did they even pick some of these weird, completely out-of-place songs?” you wonder. It becomes clear when you learn about “jukebox” musicals, where the whole thing is meant to celebrate the work of, or at least line the pockets of, one specific composer.

This is why, for example, “White Christmas” is such a bum steer. It’s all Irving Berlin music. Fab composer, no lack of talent there…but by the time they got around to making this movie, the only Berlin songs left were the cuts of the cow that are normally put into hot dogs. It explains why two of the most talented singers of the 20th century had to be good sports and sing songs about about a the lack of aftercare in the military pension program, and one’s desire to use snow as a haircare product.

And yet so many movies have pulled that kind of stuff off so well. “Shine On Your Shoes” is a song about the use of footwear maintenance services as a viable treatment protocol for stimulating dopamine pathways. You’d think that if the movie were going to use it at all, they’d stick it in the “musical within a musical,” where the cast can sing pretty much anything they want without having to justify it. But no…they found a way to make it serve a purpose in the story. All scenes in a story need to either define character or advance the plot. This song establishes Tony Hunter (Fred Astaire’s character) as a guy who’s capable of feeling genuine melancholy, but also of putting it in perspective and doing something about it.

I might be wrong here but I’m getting a weird vibe from some of you. Like you’re about to post that I’m wrong wrong wrong and that “SIngin’ In The Rain” is in any way a better musical than “The Band-Wagon.”

Well, I didn’t want to have to do this but you leave me little choice:

Don’t you feel foolish now? Thank you; it speaks well of your character that you now admit how wrong you were.

Listen to “A Shine On Your Shoes” (from The Band Wagon) on the Amazon MP3 Store.

As always, the above link is embedded with my Amazon Associates code. After you click it, every purchase you make during that Amazon session will result in my receiving a small kickback in the form of Amazon gift credits. I promise to spend them on wonderful and foolish things. Like an electric bicycle. But only if it turns out that Amazon doesn’t sell an electric unicycle.