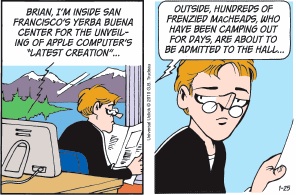 Oh, good heavens. It looks as though Garry Trudeau is doing a whole week’s worth of strips about the Apple Tablet event this week in San Francisco.

To clarify: one of the most popular strips in the world is doing an entire week’s worth of comic strips about an event in which a rumored (rumored) consumer product might (might) be shown off for the first time.

I think we now need to create a new word for “hype” that only refers to the sort of buzz that an Apple product can generate. At this stage, the only way for the Apple tablet to get more press would be if it got into a car crash after its wife beat it with a golf club.

Incidentally, that thump…thump…thump you’re hearing is the sound of Microsoft’s CEO pounding his head against his desk over and over again. You did a heckofajob with that CES keynote, Ballmie…