Two recent conversations with fellow shutterbugs have left me thinking about the way I take pictures. It seems as though both of these photographers maintain the philosophy that when they click the shutter of their camera — yes, even a digital camera — they’re “taking a photo.” I’ve come to the realization that when I press the button, I’m thinking 75% in terms of “capturing data.”

The photo comes when I dump the memory card to a hard drive and start sorting through a hundred files with Aperture much later. But there at the place and in the moment, I’m thinking of all the scene data that this device in my hands can collect, and I’m making sure that I record as much of it as possible before the moment (and I) move on forever.

Is the camera in RAW mode? Because I want it to record all of the data spilling off of the image sensor. I don’t want the camera to throw away any of the image’s dynamic range or detail by compressing it into a JPEG.

If the camera isn’t in RAW mode, have I set it to its highest resolution? When I only have limited free space left on my card, I’d much rather carefully shoot 16 full-resolution JPEGs than 48 lower-res ones.

I’m in a restaurant. Is there any way I can possibly get this photo without setting the ISO above 200? A camera increases the light sensitivity by “turning up the volume” on the image chip…and just as when you crank up the volume on a stereo, there’s an unavoidable increase in “distortion” (in the form of noisy pixels). What if, instead of increasing the sensitivity or popping the flash (which would kill the “natural” feel of the image), I leave it at 100 ISO, hold the camera against the table for stability, and just take LOTS of shots and hope that I get lucky and I manage to click the shutter during the one fifth of a second that my subject isn’t moving around?

Am I leaving plenty of room around the “meat” of the image? I try to avoid the instinct to “crop” an image in-camera. It’ll be a fine photo as-is but what if later on I want to make an 8×10 or a 5×7, and I discover that I can’t choose a different aspect ratio without cropping out something important?

Have I turned off all of the camera’s “arty” shooting modes? I love black-and-white imagery but I’d much rather turn a color photo into black-and-white on the desktop, where I can let the colors define the areas of light and dark. I’m taking home more data.

Is it worth shooting a panorama sequence, so that I can record what it felt like to be in this place? Is it worth shooting a whole mess of bracketed exposures, to ensure that I’m pulling detail out of shadows? Should I lock the camera down and shoot an HDR sequence, which I can later process into an image with ungodly-high dynamic range? If it’s a group shot…why not take a clean shot of the background without any people standing in the way? C’mon, be honest: how long is your brother’s third marriage going to last? Someday, your sister is going to want a copy of her wedding photo with an empty space where that Fresno barfly used to (unsteadily) stand. 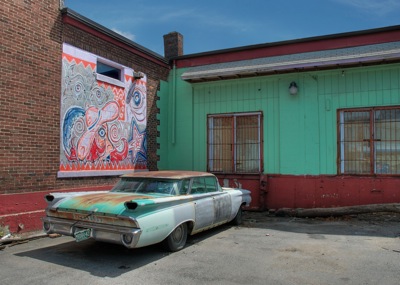 And is it even worth shooting a couple of video clips? Is the movement of this place or this object part of its “story”? Years later, will I be immensely grateful that I preserved the sensation of “looking around” here and walking from room to room?

The biggest joy and biggest burden is to have friends who are very smart and who often disagree with you. It’s easy to argue with a dumb person. You just say “That’s nice” and move on, thinking only of whether or not you should be offended that (according to this dumb’s person’s statement) there’s a huge gay agenda and none of your gay friends ever tried to recruit you into it.

It’s tougher when a smart woman explains why she always shoots JPEG. The arrogance in this discussion was all mine, I should point out; I was baffled as to why someone would have a RAW setting on their camera and not use it. I made the argument that 8 and 16 gigabyte cards are so cheap that the “you’ll run out of space” point was no longer valid. She simply pointed at the 500 gigabyte external hard drive that was connected to my MacBook. She keeps her entire JPEG iPhoto library on her internal hard drive.

I don’t think she could rebut my argument that she was leaving money behind on the table every time she clicked the shutter of her SLR. She replied that she almost never does the sort of image editing that exploits that extra data, anyway.

I sensed that I was either about to, or already had, crossed an invisible line between Enjoying The Argument and Being A Jerk About My Point Of View, so I ended it.

Another friend likes to shoot black-and-white. I’m not sure that I fully understood the explanation of why he prefers to do it in-camera instead of “cooking” a monotone version of a color image back at home on the desktop. It was mostly a style thing, I think, and you can’t argue against personal style (David Spade’s wig notwithstanding).

I respect these ideas but yoiks…their perspective mystifies me. I suppose my fresh aghast-ification is at least partly the reside of an ongoing project to collect all of my digital photos into a single library. My first digital camera shot web images at 320×240 pixels and even so, filmless photography felt as though we were tampering with incredible forces that God intended for us to leave alone. Then the resolution doubled. Soon, we were were talking about “Megapixels” and it was at last possible to print photos that were every bit as good as what you’d get from a film camera.

It took a while before the software (and its users) started to treat digital photos seriously. Photo apps did destructive edits. If you boosted the brightness and amped up the color and cropped it down to just the bit that you wanted to slap on your website, you’d just thrown away the original image forever. It’s like the difference between having the negative of your favorite photo of your parents, and only having the creased and trimmed-down print that was on the fridge for 10 years. A JPEG is, at best, a really good print that you can slap into your scanner. I want the negative…and that means shooting RAW at all times.

Rrgh. I’m taunted by 240×180 JPEGs and GIFs that I made for the 1995 edition of this blog. It’s only a whiff of the full-sized, useful photo of a once-in-a-lifetime event. I can only hope (hope hope hope) that as I drag more CD-R’s and SCSI hard drives out of closets, I might find the original 1.2 megapixel file. Even a fifteen-year-old JPEG can be vastly improved after a few moments with Aperture. Plus: it pleases me that I’m rescuing the original and making it easy to archive.

No, actually, the roots of my “capture image data first, do the Photography later” attitude predate digital photography. It goes back to my teen years, when I had been bitten hard by the bug and was checking all of the photo books out of the school library one by one.

Like anyone with a scrap of taste, I was dazzled by Ansel Adams’ landscapes. I lingered over each huge image in the coffee table books and then I moved on to his book describing his darkroom process. And gorblimey! Right there in black and white — literally — he explained the Zone System and other techniques that were in his mind as he meticulously turned the glass negative into the prints I has immersed myself in. It was important to make all the right choices out there in Yosemite with his field camera, certainly, but it was only half of the work. Each print was a meticulous piece of craftsmanship, as he toned and burned and dodged the image and made careful adjustments to the print’s chemical bath.

I just dropped off my film at Lechmere and a week later, I got the prints that I got: good, bad, or indifferent. Ansel Adams made the darkroom process seem so very Catholic. You took your film into this dark confessional, carefully examined its spirit and intentions, and then you washed away all of the negative’s sins and led the image towards Salvation.

Mr. Adams — you know, I met him when I was a kid; I should write about that some day — was a huge idol and he still shapes my modern attitude. You can’t turn a crummy RAW file into a terrific photo; you have this responsibility to think hard and make good decisions before you click the shutter. But in the end, the original image is just the raw batch of ingredients. You’re meant to cook them and combine them and plate them…and that’s what you set on the table for other people to enjoy.

Photography pushes my brain in new directions. It keeps certain mental gears greased and cleans various synaptic valves. The relationships between myself, my subjects, and my equipment keep changing and there’s an eternal sense of play that I deeply enjoy.

I came home from last week’s MIT Flea Market with a nice bit of kit: an Olympus OM-10, which was one of “the” 35mm SLRs of the 80’s. “Make me an offer,” the vendor said. And not with the optimism of a man who thought I’d come back with a figure four times what the camera was worth. He spoke with the world-weary fatigue of one who just wanted to be rid of it and retain a shred of dignity.

Apparently, this shred of dignity was worth $5. What a buy! There isn’t a scratch or a scuff on it.

I bought it partly for the nostalgia factor. Wait, no: I bought it mostly because it was five stinking dollars! Even a knee to the groin seems like a can’t-pass-it-up bargain at that price.

Before I relegate it to the knick-knack shelf, however, I think I’ll load up this puppy with film and batteries and take it out for a day’s worth of shooting. A roll of film is a series of 36 irrevocable decisions and miniature leaps of faith. You have to commit to one presumption about the composition and exposure before you press the button and then continue with your walk. Either you got the shot or you didn’t. At fifty cents per exposure (the cost of film and processing) bracketing your exposures is eeeeeeek-spensive.

It’s an exercise in emulsive discipline. It’ll be good for me.

I’m still right about capturing as much data as possible at the scene, though. Just because my friends are smart doesn’t mean they’re right.