No, not that one. People say “I’m attending the San Diego Comic-Con” for the same reasons why they say “I’m going to swallow a whole bottle of rat poison.” It can only be considered a positive announcement in the sense that if they truly intended to successfully commit suicide, they wouldn’t be stating their intentions ahead of time. The suffix “…for God’s sake, stop me!” is implied.

Those of us who enjoy both life and comics gave up on San Diego a while ago. It’s just too damned big. Instead, I’m attending the New York Comic Con, which starts on Friday.

The NYCC is less than five years old but it’s quickly achieved a San Diego vibe. I don’t know how I’ve managed to avoid it for this long. I mean, c’mon, Andy. For years and years you’ve wanted to go to a huge national polymathnerdcon but have complained about the travel expense. The Industry obligingly establishes one in a city just a short Amtrak ride away, but do you go? No, you do not. Are you aware that there are far, far fewer of those scary Klingons at these things than there were back in 1999 when you attended the San Diego Con? You’re perfectly safe, son.

Well, all that matters is that I’m coming now, and that I’ve already agreed not to make any snarky comments to any former castmembers of “Manimal” that I might encounter over the weekend.

This was going to be just a fun, light weekend. In fact, it was as much an excuse to visit some NYC pals as anything else. But when I registered as a member of the media a few months ago, that changed everything. Benefits of a media badge: free admission, and I can cut any line that doesn’t end in either a bathroom or a “Twilight” castmember signing. Disadvantage: whatever my intentions, I’ve turned this into a business trip. I forgot that (oh, that does make sense) the press list is available to people who are keen to meet with members of the press.

Emails started trickling in last week. Actually, yeah…I kind of do want to talk to Autodesk and Wacom about their digital art tools. Two briefings go on the schedule. Whoops, if I can talk to publishers about their iPad and Android tablet plans, I should probably take advantage of those opportunities. More briefings.

One email in particular merited a good twenty seconds of re-reading and the chewing of a bottom lip. But inevitably, I said yes. It’s very difficult to be asked a question like that and then send back the reply “No. I have absolutely no interest in being part of a table interview with Stan Lee.”

The coolest bit: I’ll be moderating a panel on Sunday. “The Vision Machine” is a new creator-owned limited series written by Greg Pak. The panel will be an hourlong discussion of the central theme of the book: what happens to the world after a fantastic new consumer device kicks the legs out from under the concept of personal privacy and upsets the balance between government, corporations, private citizens, and the common good? You thought the iPad was a game changer…well, you ain’t seen nothing.

It’s fab stuff. I expect to spend most of the hour reminding myself that the moderator’s real role is to keep an eye on the time and to make sure that all of the speakers get to say their fill. I’ve read a PDF of the first issue and I think I could blather on about the questions it raises for a whole hour all on my own.

Full details are up here on Greg’s site. Abbreviated details are between the following set of quotes: “Sunday from 2:30 to 3:30 in Room 1A14.”

For all of my faux-complaining about my schedule, I fully expect NYCC to be a blast. In many ways, a big national con is no different from most of the big trade shows I cover. It’s a huge convention center packed with people, most of them seem to be in your way, and the same reality distortion field that Apple erects around its product announcements is fully armed and operational around the venue’s food stalls. But there’s a special energy that’s generated by a huge crowd of people united by a common interest. I anticipate lots of things to see and checking out the work of lots of writers and artists whose work was completely unknown to me before I stopped at their table, checked out a sketchbook or a sample issue, and became an instant fan.

“But if you carry the D80 body in addition to the D200, you can have both the pro-quality 50mm f1.4 and the flexibility of a consumer mid-range zoom on hand at the same time!”

It’s a compelling argument. But it’d probably be more compelling if I had the build of a mid-Seventies Dennis Hopper, and could claim that I’m cosplaying as his character from “Apocalypse Now.” 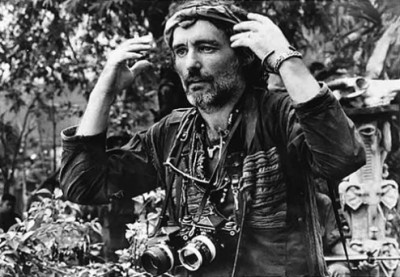 The San Diego Comic-Con (aka Comic-Con International) starts up in just a week or two. I’ve attended only once, back in 1999. I’ve always wanted to go back, but the show has become truly crazy-go-nuts-huge. Given that I almost certainly can’t line up a gig to cover my expenses, I suspect that after only my second day packed in a convention center with 125,000 people — at least 20% of whom will have probably never heard of The 5-2-1 Rule(*) — I’d be asking myself why I spent $1500 on a trip that didn’t involve white sand beaches, open spaces, and the possibility of spending less than $16 for a slice of pizza and a medium Coke.

By now, I’ve got the choreography of my little “will I or won’t I?” Comic-Con dance down cold:

And there’s one more annual tradition. It takes place somewhere between #5 and #6: “I come up with what I’m convinced is the most awesome Comic-Con costume idea that’s ever been conceived, or ever will.” This idea is usually beautiful in concept and easy to execute.

We’re right on schedule. If I were attending Comic-Con this year, I’d totally spend a day walking around dressed as this character:

I would walk the aisles in my bowler hat, striped shirt, spattered smock, and hi-top Chucks. I’d have a brush clenched between my teeth, a paint bucket in one hand, a precise number 5 in my other hand, and in my eyes you would see the darting, predatory look of a man on a mission. From time to time, I would hold the number against a plain surface. I would peer at it thoughtfully and then shake my head in disappointment and move on.

I realize that not many people would “get” this costume. But I’m certain that the 48 among the 125,000 attendees who did recognize the character would pack their bags and go home after getting their picture taken with me.

They’d (correctly) figure that the whole rest of the Con could only be a letdown. On their way to the door, they might stop just long enough to punch a Steampunk Stormtrooper Vampire in the throat. Sure, they were going to do that anyway, but they’d suddenly feel far, far more justified for doing so.

(Note to Stormtroopers: actually, I love your costumes. It’s just the “freestyle” sub-section of Star Wars costuming that makes me a little impatient for the Biblical apocalypse. 1,000 identically-uniformed Stormtroopers = an awesome display and a convincing simulation of what would happen if Lord Vader had tracked the Millennium Falcon to a comic book convention instead of a mining colony. 2 people dressed as “Sonny and Cher as Stormtroopers” = oh, honey. You’re very sweet, and I can see you put a lot of work into your Bob Mackie-inspired armor…but you’re really trying too hard.)

If you’re attending Comic-Con, you’re welcome to my costume idea. You’ll be my barometer for future attendance. If you show up in this costume and are not immediately presented with the key to the whole god-damned city, then the San Diego Comic-Con will be dead to me evermore.

(*) “The 5-2-1 Rule of Conventions”: During each and every day of a multi-day comics/pop-culture convention, you must get a minimum of 5 hours of sleep, 2 real meals, and 1 shower. NO exceptions, NO excuses.