My old Mercury Sable, no virgin when it came to riding on the back of a flatbed truck, took its last such journey this afternoon: it left my driveway for good at around 2 PM. She carried me faithfully and reliably for over 90,000 miles until a few years ago, when those three jerks at two separate garages told me the front suspension could one day collapse while taking an offramp at speed. Or some other such nonsense.

The Sable was my Dad’s car. That’s probably why I kept it for so long after I took off the plates.

(Well, that, plus I didn’t have to shovel that part of the driveway for a couple of years. Also, the oil and coolant stains it had left on the driveway over the years were much harder to see with the car parked over them.)

Every time I’d arrive home and see “his” car in my driveway, I’d think “Oh! Dad’s come to visit!” Even though, of course, Dad only ever saw my driveway in pictures and videos. I bought it from his estate after his stroke, when he’d moved to the care facility where he died a year or two later.

Dad’s car helped me heal. I felt pride in taking as good care of “his” car as he would have. Through careful driving, and regular maintenance, I rolled its odometer to nearly 180,000 miles and the engine was healthy right to the end. During that time, the only damage it ever incurred was due to a careless parker (broken mirror, deep crease to driver’s side door and front fender) and a lady who merged into my lane without looking (more damage to the front fender, including front headlight).

(Plus: lots and lots of rust to the frame. Because, New England.)

There was a certain correctness, too, in the fact that (as a journalist who works out of a home office) the only period of my life when I had a long, regular commute and I truly needed a car was when Dad was in that care facility. It was about a ninety minute drive from my house and I made that roundtrip two to five times a week for more than a year. I was still processing my Mom’s death during Dad’s illness. Dad’s stroke had left me with plenty to process on its own. I did a lot of thinking about my parents during those commutes. It was ages before I even chose to move any of Dad’s stuff from the back seat or trunk.

I suppose it’s now safe to admit that during the week when we knew that Dad was in his final days on this earth and we were spending every hour either in his room or in the lounge across the hall, I set a career-best land speed record in the Sable. At a certain point I desperately needed to go home for a shower and a change of clothes, you see. I zipped home and zipped right back, praying all the while that I wouldn’t miss anything horrible while I was gone. I-95 was totally deserted at 2 AM and I felt like I wasn’t endangering myself or others. I also figured that if worse came to worst, the excuse I was carrying was strong enough to convince a state trooper to end our roadside transaction with a scolding and a ticket instead of Miranda rights and handcuffs.

If I’m honest, I also needed to blow off some of the week’s tension. Suffice to say that the speedometer needle went places that I’d never taken it before; after rotating past a certain point, the needle began creaking like the spine of a brand-new book being opened. It indicated just how much tension I’d accumulated after three days in a room with my family, keeping myself together while supporting my sole remaining parent’s transition into death.

Still, its sentimental connection to Dad forced me to at least think about fixing its rusty suspension. The old car had already surprised me by starting up and running reliably even after 175,000 miles, even after a week in an airport parking lot at subfreezing temps. And, thanks to some new driving techniques I picked up after installing a dashboard fuel economy meter, that old Sable consistently got 25 to 30 MPG…well above what the factory sticker promised. What a coup if it made it to 200,000 miles!

But…that would’ve been the second time I’d kept the Sable going by phoning around junkyards to locate an old part that my bless-his-soul mechanic couldn’t find in any conventional inventory or catalog. All of the bits of the Sable that were meant to be replaced every 75,000 and 100,000 miles had already been replaced at least once and were probably going to fail again soon. The underbody rust wasn’t limited to just that one part of the suspension, either. No, it was time for the Sable to go. And it was time for me to let it go.

Of course, if I’d let it go within a year of parking it, before its quarter tank of remaining gas had turned to shellac and its engine compartment had become a winter shelter for various neighborhood critters, I probably could have gotten at least five times as much money for it. But it’s not as if I didn’t get any joy out of the Sable during its final two or three years as a driveway art installation.

Today, I watched it go. I felt a deep sense of nostalgia, but no sadness.

I’ll use this check to buy opera tickets. I’ll wear one of Dad’s ties when I go.

Right at this moment, writing that sentence, I realized that the production I want to see is running right around the week of Dad’s birthday, too. 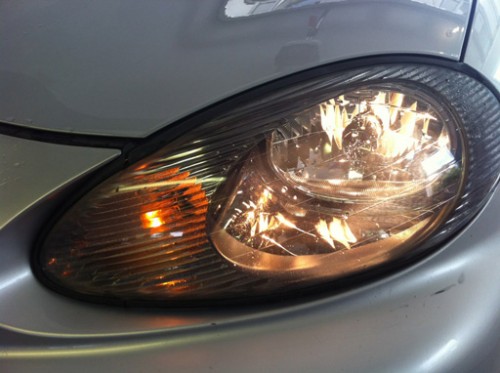 I bought a brand-new car last week. I won’t show you the whole thing, but here’s one of the headlamps.

Ha! See, you’re completely unaware of what just happened, but I fooled you! That isn’t a new car at all! It’s just what my 10-year-old light looks like after I refinished it!

Oh, I’m so sorry to have taken the mickey out of you like that. But I’m pretty pleased how it came out. My old car is getting up there in years and miles but it’s still running like a top. So every now and then, I address another matter of simple wear-and-tear, like a missing wheel center cap or a busted dashboard light. I mean, I might as well. I reckon I’ve still got another few years before I can finally have a car with a Bluetooth-enabled stereo and integrated iPhone dock.

Last weekend, I tried refinishing one of the headlights. You see this problem on just about every old car on the road: the lens in front of the actual lamp is cloudy and yellow. It wasn’t so bad that the light didn’t work, but yes indeed, on a dark road I could definitely tell that the left light was more fogged up than the right one.

I did a Google search to see if I could buy a new lens and that’s when I discovered that fixing the existing one was a cheap and easy job. It’s just a little tedious.

The problem isn’t the whole lens. The very top surface of the plastic gets UV-damaged. All you have to do is sand off the damaged layer and polish what’s left to a clear shine.

Thankfully…there are kits. I bought this 3M kit from Amazon. All you need is tape (to tape off any parts of your car next to the lens that you’d rather not grind down with a sanding disc on an electric drill) and a spray bottle (for the wet sanding stage).

I was expecting it to make the lens better. I was prepared to screw it up a little and leave the lens looking as though someone who’d never polished plastic before had done a none-too-bright job of it. What I wasn’t expecting was that it would come out looking perfect. 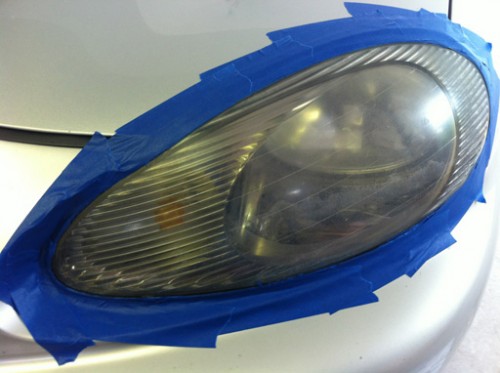 (Yes, this blog post sits at the intersection between “I’m so happy with this thing I bought on Amazon that I want to recommend it to people” and “Hey, if people click on my Associate link, they will start into motion a complex chain of events that eventually results in my being able to buy the next volume in the Complete Peanuts anthology series without having to actually pay for it myself.”)

And it was a cinch. You sand the lens with two progressively-finer grades of sandpaper, then you wet-sand it, and then you polish it. Refinishing the lens took well under an hour and it was a completely linear process without any confusing decision points.

The bottom line is that I had absolutely zero problems getting the job done. And though I know my way around a power tool, I’d never polished plastic before. So this seems like this is well in the wheelhouse of anybody who can follow directions. The directions in the 3M kit were exceptionally well thought-out and covered everything.

I was so happy with the results it was actually a bit embarrassing. “Damn, that looks terrific!” I kept saying, as I eyed the results. This was more a compliment for the kit than for myself.

It was slightly less-crazy to say that out loud, thanks to the fact that a good pal of mine was curious to see how it worked: I did the job in his garage. When I suggested those plans, I didn’t know that he actually enjoys detailing cars as a hobby. His own cars receive regular loving care with the cabinet full of tools and products in his garage. So when I pulled my car — a vehicle which gets maybe one machine wash a month — into his shop, it was like I’d dropped an RC helicopter and an hour’s worth of fully-charged batteries into his lap.

I paused in my labors about once every five minutes to ask “Um…are you sure that you enjoy detailing cars? Because if this is actual work for you, and I’m just sitting here letting you clean my car, then it means I’m kind of a d***.”

He couldn’t hear me over the sound of the electric buffer but later, he confirmed that this was indeed the case. The first thing, I mean.

End result: all in all, my car looks better than it has in years. I took my pal out to lunch. And after yesterday, when a light skim of rain made the detailing job and the restored headlight lens look even nicer, I shamed myself into going on eBay and finally replacing that wheel center cap that I lost God-knows when.