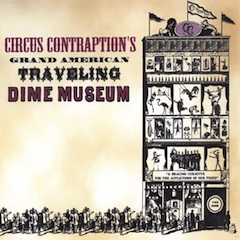 “Absolutely! For the past twenty years, our label has always been one step behind on every hot new music trend. By the time we get around to trying to sign a Thrash Gospel band, or a group that’s been playing all of the Velcro Cheese clubs, or can play anything danceable involving a steam radiator, we’re left with the dregs. Well, no more, Roger. Not this time.”

“And you think circus music is the next big thing.”

“I have no idea. I just know that nobody’s onto it yet. Okay, yes, it’s a gamble. But if Kanye West ever should go off on an insane rant about how some day, every city will have a big tent shaped like his head, where performers will play ‘My Beautiful Dark Twisted Fantasy’ 24 hours a day on tubas and calliopes…we’ll already be right there on the ground floor.”

“You know what? I was skeptical about this idea until you brought up Kanye West.”

“That guy might say or do anything at any time for any reason.”

“Indeed. He might be as nutty as a set of linoleum underpants, but I can’t deny that he’s a tastemaker.”

So why isn’t circus music a popular genre, with its own category in every music department? Wait, actually…

I’ve just checked iTunes and confirmed that there’s no musical genre for “Circus.” Which surprised me. Have you ever scrolled through that entire popup list? There’s even a genre for “Finance.” Really? What stylistic elements typify a good Finance song?

(I’ll now confirm the thought that’s in all of your heads right now: “Every song every band has made since their third album should be filed under ‘Finance’.”)

I started buying Circus Contraption tracks after watching a marathon Thanksgiving showing of the fantastic PBS multipart documentary about the Big Apple Circus. It’s a tremendously entertaining series…and all six hourlong episodes are online at the PBS website.

“You’re a damned liar, Ihnatko” you say? How sad. Witness:

The show has a cool soundtrack. I do wish that its signature theme (by The Features, a band that I hadn’t heard of before, but who I really, really like) were longer. It runs just a little over a minute. It’s not about the “Beats per measure per dollar,” you understand; it just seems like “Whatever Gets You By” has some real legs to it.

Producers who were looking for music for their circus documentary and who also had access to a search engine were inevitably going to discover a band called “Circus Contraption.” It’s good, classical circus stuff. Strike that: I mean that it’s clearly modern circus music. It doesn’t trip into the cartoony worn-out cliches that come to mind when you think “circus music.”

The important thing is that their music doesn’t swing into that equally boring area of “Ooooo…it’s a circus, but it’s a darrrrrk and scarrrrryyyyy circus. That’s my innovative twist, you see. I’m really quite proud to have come up with that. Oh, sure: I suppose all of those soccer moms out there might not having their heads blown like that but I’m at the mercy of my Muse. I’m an artist; I ride at the gates of dawn and I take no prisoners.”

I’ve had some of these tracks in my music library for a couple of weeks now, though, and I must caution you that they can be dangerous when they come up on shuffle play. You’re culturally-programmed to respond to this kind of music in a specific way. If you’re in the kitchen and a recipe calls for three eggs, then those eggs will be juggled on their way from the fridge to the mixing bowl. If you’re out taking your daily Constitutional and there’s anything narrow and linear on the ground along your path, you will hold out your arms for balance and walk across it like a tightrope.

When you walk your dog at night and he finishes taking a whizz against a streetlamp, you will suddenly point to him there in the spotlight in a broad and flourish-ey sort of way, as though to encourage the audience to applaud his wonderful trick.

It will happen. If this music comes on in your headphones and it doesn’t inspire you to behave as though you’re wearing something colorful and spangly and 300 people are hanging breathlessly on every graceful move you make, then something inside you has definitely gone dead.

Listen to “Carousel” on the Amazon MP3 Store.

As always, I remind you that my music links are embedded with my Amazon Associates code. If you click, any purchase you make during that Amazon session will result in my receiving a small kickback in the form of Amazon gift credits…which I will spend on fun and foolish things.