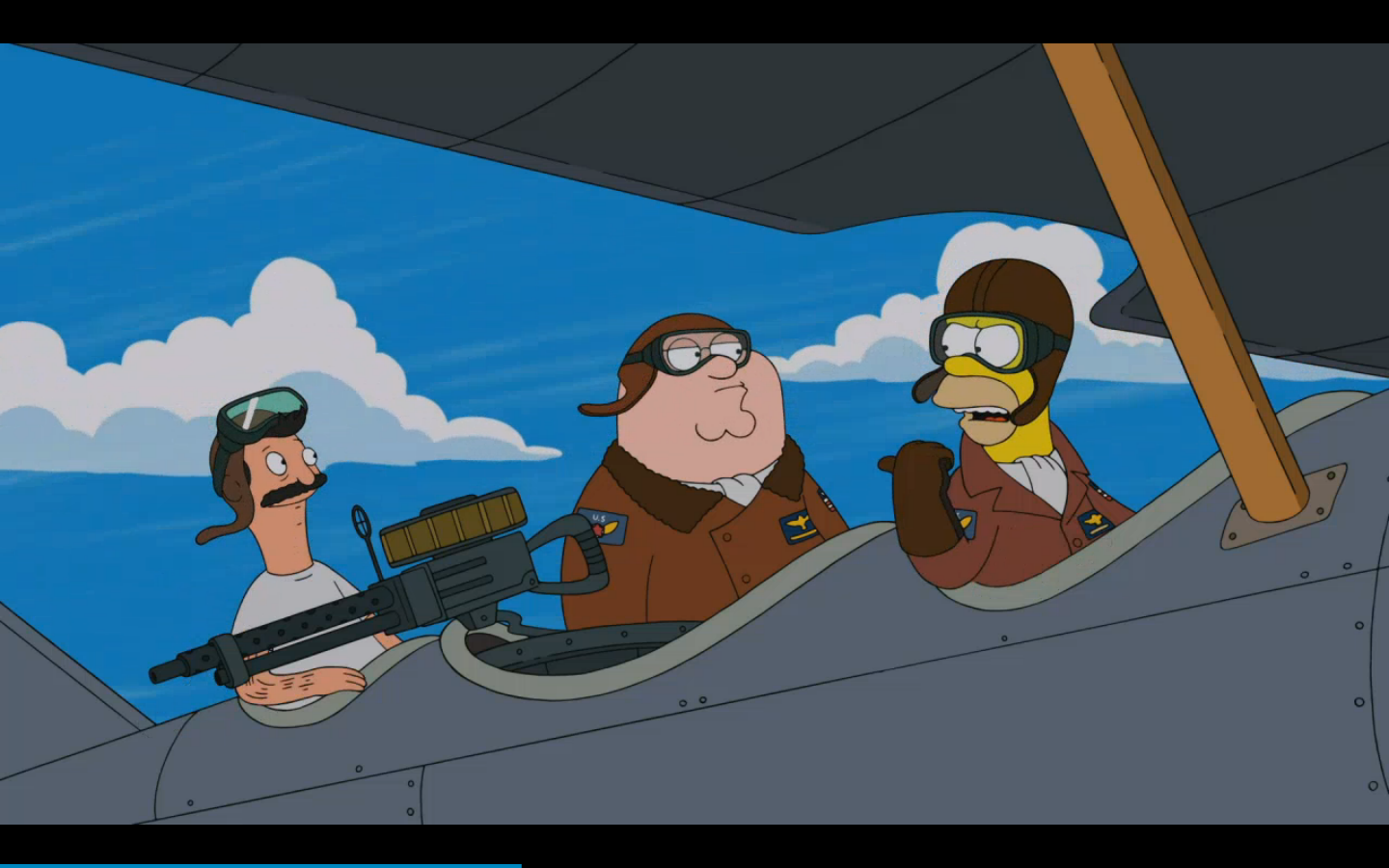 Image from the footage of the Simpsons/Family Guy episode, previewed at the San Diego Comicon.

It includes another swipe at “Bob’s Burgers.” Viz:

Peter: “Oh, we gotta carry him because he can’t fly on his own. We let that other guy try, and look what happened:”

[Cut to Cleveland Brown (from the failed “Family Guy” spinoff) lawn-darting his plane into the ground.]

I hate “Family Guy.” I hate it because it’s sexist, it’s racist, and it’s lazy. But I won’t get into that here; instead, I’ll point you to this episode of my podcast, where I talk about my feelings about the show in depth.

No, today, I’m talking about my astonishment at how frequently a show that’s this bad, this derivative, this lazy, and this disposable goes out of its way to say that a much, much better show isn’t very good.

Did “Family Guy” really once say that there are only one or two truly funny “Monty Python” sketches? It inspires me to stop and respond:

“But…’Monty Python’ revolutionized comedy. Many of its jokes and sketches have entered the international cultural lexicon. Even forty years later, few people seem to think that their material is dated or that their reputation is overrated. Generations of comedians, novelists, and screenwriters cite Python as a major influence. All right?

“And now, ‘Family Guy’, let’s talk about what your show has contributed to comedy. … ……. … …… Oh! Your writers are so lazy that the phrase ‘Manatee Joke’ is universally-understood to refer to your style of just stringing random concepts together instead of taking the time to write something with any relevance, context, or creativity…”

A joke like this one gets on my nerves. “Family Guy” is pushing its luck. H. Jon Benjamin (voice of Bob) and the rest of the show’s team are obviously OK with this, which ends the argument on whether or not it’s an appropriate joke. Still, why have a blog if you’re not going to use it to publicly cluck your tongue at personal petty annoyances?

“Bob’s Burgers” is one of my favorite shows on TV. I love it primarily for the only reasons that matter: because it’s funny and each episode is filled with visual delight.

After that? I love “Bob’s Burgers” because everyone on that show tries so hard, in shot after shot and story beat after story beat. It’s clear that they absolutely give a damn about the product they’re producing. When I’m done watching an episode for the second or third time, I marvel that there was an easy way and a hard way to write and animate what I’ve just seen…and each and every time, they went with the hard way.

That’s…that’s definitely the hard way to do that. Right? I’m not an animator.

I wanted to embed the scene here. Alas, the YouTube community that can normally be counted on to post copyrighted content in a timely fashion without the slightest care about helping creators to put food on their children has failed me. So instead of the “Wharf Horse” scene, I’ll embed another example of this show’s work ethic. Fox’s “Cosmos” series forced all of their regular Sunday night animation to air an hour earlier for two whole months. The producers of “Bob’s Burgers” needed to get the word out.

Here’s how they did that:

The hard way. And so, the show’s fans have been given this little gem that continues to entertain long after “Cosmos” has wrapped up its run.

I especially appreciate the effort the show takes to create grounded, believable characters and situations.

Bob Belcher owns a burger place, and runs it with his wife, Linda. Their three kids (Tina, Louise, and Gene) help out. These five characters aren’t there just to hurl lazy zingers at each other: they’re connected by real relationships. That’s the hard way: write a scene in which the needs of comedy are met (and usually exceeded), and yet there are things that the characters cannot and will not do, because that’s not who they are.

Louise (the one who always wears the bunny ears) enjoys creating chaos in any situation, but she won’t undermine or hurt her brother or her sister. And when she’s about to go too far, she’s usually held back and corrected by her two parents…people who are actual adults and who exercise real authority. In most other shows (including live-action sitcoms) parents treat their kids like colleagues. Moreover, while both of Louise’s parents love and care about her, she has a different relationship with Bob than she has with Linda.

Another example: why is Bob’s business just treading water? In a lazier show, Bob would be incompetent, or the family would constantly be doing things that create disaster. By Season Three, the show would have mostly forgotten what Bob even does for a living. And (honestly) if it’s funny, what’s the complaint?

But “Bob’s Burgers” makes a more ambitious choice: Bob is a terrific chef with a lot of skill and creativity. His restaurant is struggling because it’s located in a strip of middlebrow businesses adjacent to a beachside amusement arcade. This isn’t an area where people come for a Burger Of The Day infused with saffron. They come here on the Fourth of July hoping to see a bunch of people try to eat more than 62 hot dogs in 12 minutes.

“Bob’s Burgers” is written with a grounded reality. It’s harder to do, but they can create and play off of a lot more tension, and the resolutions to storylines can be much more satisfying for the audience. They can do things that a “silly” show (and I use that word to describe a genre, not as a slam) can’t.

In the episode “Topsy,” Tina is participating in Louise’s science fair demonstration. Louise being Louise, she’s subverted her assigned subject of “Thomas Edison” into an attack against everything that her substitute science teacher stands for. He’s an Edison reenactor at the science museum, and refused to let her just re-use her papier-mache volcano from last year. She’s going to “electrocute” Topsy the elephant (to be played by Tina) in front of all of the students and parents, replaying the publicity stunt that Edison staged to “prove” that a competing electrical system was dangerous. Tina will be fine, Louise promises, because the yoga mat she’ll be standing on will insulate her from the tens of thousands of volts being thrown off by the big Van de Graf generator behind her. A tech runthrough of the scene suggests that she’ll be killed horribly.

The show can get a lot of laughs and build a lot of tension from Tina’s panic. The climax of the show, when it appears that yup, everything’s gone horribly wrong, has impact. Sure, we know that “Bob’s Burgers” isn’t going to kill off Tina, and because this is animation, she can be knocked unconscious and wake up a few minutes later with smoking hair but otherwise OK.

But get this: we don’t want to see Tina get hurt. Not even for laughs! There’s a few seconds in which Bob and Linda and Louise are shouting and rushing to the stage where Tina is slumped to the ground and we’re right on the same emotional page as those characters. And when it turns out that Tina was just acting, our relief is genuine.

“Silly” shows can’t achieve that. We’ve become absolutely numb to the irrational, unmotivated, and utterly insane amounts of physical and emotional cruelty that the “Family Guy” characters inflict on Meg Griffin in nearly every episode. It’s OK that “Family Guy” doesn’t make us care about a character, but when the show becomes so oblivious to the laziness of this gag that it can’t even make us laugh, that’s a problem.

Meanwhile, we appreciate Tina’s quiet heroicism; we’re glad that Louise realizes that her natural inclination to stir the pot caused her to almost do something she never would have forgiven herself for; we admire Gene’s talent and think that he’s one of those weird kids whose weirdness leads him in positive directions. We want good things for all of these kids.

I’m tuning in week after week for so many reasons. One of them is that I legitimately care about these characters. “Bob’s Burgers” does things the hard way and that‘s the payoff. These episodes resonate; they’re memorable. People will be talking about “Topsy” for as long as we’ve been talking about the “Planet Of The Apes” musical in “The Simpsons.”

In 12 seasons, has “Family Guy” created even one classic bit? Yes, that’s the payoff of laziness.

I’ve been praising the show’s writing, so it’s time for a shoutout to the work ethic of the animators and directors. “The Simpsons” starts almost every episode with a new couch gag. And in a period of the show’s history in which too many people dismiss this show for just phoning it in, let’s give “The Simpsons” its due for airing exciting, unexpected, and sometimes even experimental animation into prime-time.

The equivalent on “Bob’s Burgers” is the end-credits animation. Thirty seconds of totally unnecessary work, often backed by new, original music. They’re always good, but one end-credit sequence stands out for me:

Megan Mullally sells the holy hell out of the song…and just look at that animation! What a performance the artists created! It’s an exquisite parody of that theatrical style of singer/songwriter stage performance. It cracks me up every single time. And I marvel that the “Bob’s Burgers” crew puts so much effort into crafting these little jewels. They’re fully aware that Netflix, Hulu, or the local FOX affiliate is likely to electronically shrink this scene down to postage-stamp size to try to sell you on another show. This didn’t stop the “Bob’s Burgers” animators from having the singer tap and flex her left foot for added emphasis.

Yes, I’m fully on board with “Bob’s Burgers.” My favorite kind of relationship with a show is one of absolute trust. It happens when a show surprises and delights me on such a consistent basis that my “critical, wary consumer” eye has been completely obliterated. I no longer look at the plate or ask “what’s in this dish?”…I just dig right in and abandon myself to joy and new experiences. I would eat goat brains if it were served by “Bob’s Burgers.”

I feel a bit defensive when I talk about my feelings about “Family Guy.” Such negativity! And if I guess if I were a better person, I wouldn’t waste any time talking about things I don’t like.

And let’s also acknowledge that the jokes against “Bob’s Burgers” are likely meant in good humor. The show pokes fun at itself in the crossover promo clip as well as during its own shows.

(Which shows a healthy self-awareness but please oh please: instead of winking to the camera about how lazy your jokes are, could you just, you know, try to do better?) 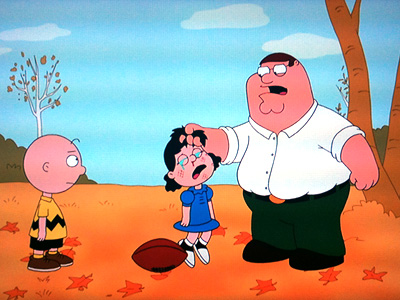 I note this with proper respect.

Then I remember the episode in which 40-year-old Peter Griffin beats the holy hell out of a defenseless seven-year-old girl, despite her blood and tears and cries of helpless pain and shock. The scene goes on for so long and stretches so far beyond the needs of the joke that I can’t help but wonder if the director of this episode has some sort of fetish about seeing little girls being nearly beaten to death. Further, she’s a legendary character created by one of the most creative, influential, and hard-working artists of the 20th century.

Which makes me think “‘Family Guy’ can go **** itself” all over again.