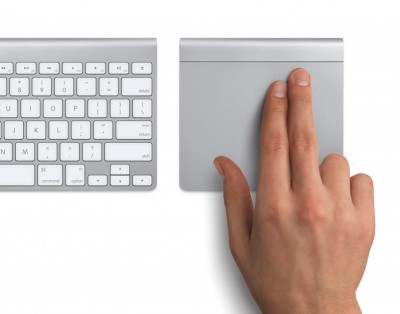 Apple's new Magic Trackpad makes me wonder what it's really meant to connect with.

Photos of Apple’s new Magic Trackpad leaked a while ago. If it were any other company’s product, it’d have been a slam-dunk sneak peek. But this is Apple; nothing’s released until it’s released. Or at least officially announced.

Compare and contrast this with PC makers who indiscriminately spray new products into crowds of terrified consumers, or (God help us all) Microsoft. I sometimes wonder if Microsoft CEO Steve Ballmer is Tyler Durden from “Fight Club.” Tyler takes to the stage once or twice a year to show off “Exciting! Revolutionary! GAME-CHANGING!!!” new Microsoft software and hardware. He’s energetic! Aggressive! Confident! He has a PLAN!!!!!!!

…And then a month later, meek, rudderless Steve Ballmer watches the video in shock. I…I said that?!? It’s insane! I must be stopped! Lo and behold, nearly everything that Interesting Steve announced in the 2010 CES keynote has been scrapped.

Not Apple. Unless you want to counter-argue that maybe Steve Jobs’ Tyler Durden personality completely took over while he was in high school and never let go. If so, cool; let’s order a pitcher of drinks because we’ve hit upon a good topic for group discussion.

So: Magic Trackpad. It was released this morning, along with updates to the iMac line and a new Cinema Display. And, surprisingly, a new Apple AA battery charger whose main feature seems to be that after your batteries have been topped off, it draws 10% of the power of other AA chargers.

On its own, the Magic Trackpad is sort of an ordinary release. It’s a big notebook-style trackpad, built as a separate Bluetooth input device so that it can be used with desktops. Nice idea. I’ve had Wacom’s Bamboo tablet for a while now and I love it. Resting your hand on part of your desk and just tickling a surface is a quick and natural way to control the cursor, and you can set up the Bamboo with multitouch gestures for launching and switching apps, selecting tools…pretty much anything that a sane man could want.

A little trackpad like this is also a handy compromise for folks who sort of want a tablet input but can’t justify the expense. I use the Bamboo to sign documents and it’s also lets me “fingerpaint” edits to photos and artwork, either via my fingertips or a precision stylus.

Neat. The Magic Trackpad goes a little further in that it natively supports MacOS touch gestures. It’s not a “special” input device powered by unique drivers; it just is, so to speak.

Nope, I don’t have one yet but I expect I’ll have one shortly. So a hands-on review will have to wait until I get my hands on one.

Still, the existence of this device invites me to strap on the long, salt-and-pepper fake beard that I keep on a special peg next to the desk for just these sort of beard-stroking opportunities.

I think this device articulates their faith in multitouch interfaces. Across the board.

Mind you, I’m not speculating about a new AppleTV that looks and feels like a TV/HDMI version of the iPad. I’m imagining something with a UI built for a TV screen, to be viewed and interacted with from ten feet away.

Even if we leave aside any changes to the AppleTV’s inputs or UI, the big benefit of moving AppleTV to iOS would be that it’d instantly allow the device to take advantage of the huge iOS development ecosystem. The work that iOS developers have put into iPhone and iPad apps could go into AppleTV apps as well. The biggest problem with the AppleTV has always been the tame and provincial nature of its feature set. Two months after Apple releases iOS dev tools for it, those problems would disappear.

And what’s the point of designing a brand-new, iOS-optimized, fast but power-saving A4 CPU if you’re not going to stick one inside everything you’ve got going?

It’s all speculation (which is why this is on my blog instead of Someplace Reputable). And the calmer, more rational line of thought is that Apple could transition AppleTV to iOS and the A4 processor without a new multitouch wireless input device. Still, the Magic Trackpad does inspire one to dream, doesn’t it?