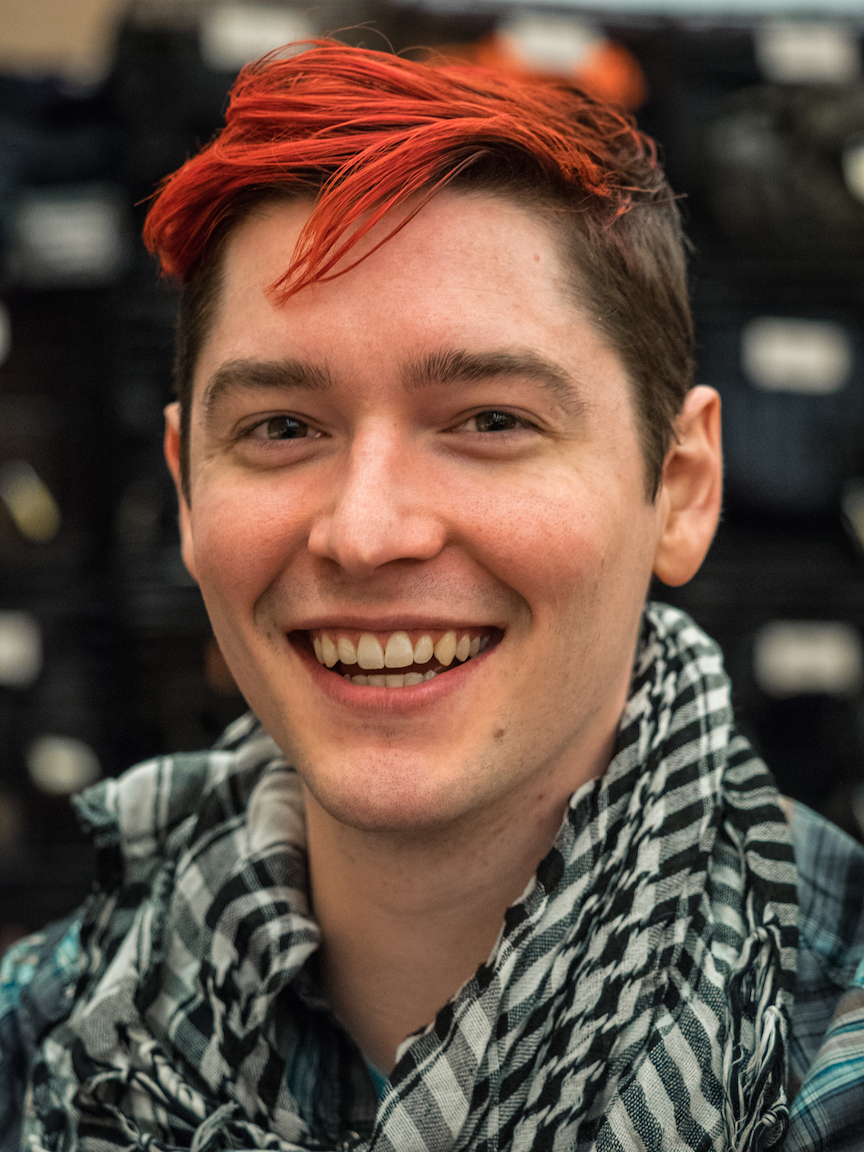 Oh, whoops: by “Tweaker” I’m referring to me, not to the subject of this photo (Chad Johnson, aka OMGChad, a fab former producer at TWiT who’s now off on his own and building his own business hosting his own YouTube channel).

And I don’t mean “tweaking” in the sense of being hopped up on meth. I mean “obsessively making minute adjustments, forever.”

Perhaps I could have saved some trouble by choosing a different title for this photo.

I just wanted to get at the fact that the PAX East photos I’ve been posting to Flickr are my first full project since switching from Aperture to Lightroom. It’s clear that Aperture did not, in fact, just off to the store to get a pack of cigarettes and that it’s never, ever coming back and I wonder if it ever really loved us, anyway?

Well, whatever: Apple’s not going to support my favorite photo library/editing app any more. I’m going to have to convert my Aperture instincts to Lightroom instincts at some point…I guess I might as well get started now.

It’s a frustrating and universal experience. You build more equity with an app or an OS the longer you use it. At this point I am really, really good at walking (no joke; I can walk across almost any surface without falling over…even if I’m carrying lots of stuff at the same time). It sucks to have to throw all of that away and switch to crawling.

Learning a photo editor isn’t the same as learning to run away from predators. You do get to carry over some basic understandings of how color and light work and an inarticulable personal definition of what constitutes a photo that “looks right.”

But this photo took me wayyyy longer to process that it would have in Aperture. It was shot in the press room, with that terrible institutional overhead lighting that knows only hatred and lives only to create unflattering skin tones. Just nudging the White Balance and Tint sliders won’t do.

It’s kind of a nice portrait and I wanted to get a copy to Chad before I forgot about it. I’ve now had a few more days with Lightroom and a little more time to focus, and this second version is way better. There’s more depth to the skin tones and Chad’s plumage is closer to its natural (or should I say “natural”?) red.

Getting back to “personal definitions of what looks right.” I feel like I screw up photos like this one by trying to make terrible overhead institutional lighting look like terrific balanced studio lighting. I’ll get better results by trying to make it look like good institutional lighting…or, as if it was shot with a camera that costs three times as much and is way better at solving white balance problems automatically.

Life is a learning process. I even post photos differently. I used to come home from an event like PAX or Boston Comic-Con and spend two or three weeks culling hundreds and hundreds of photos down to 80 or 90, editing and captioning each, and then posting a huge album all at once. Now, I use the brick-by-brick approach of posting a photo a day until I think I’m done. I like the pace, I like the ability to treat each photo like its own special project, and I like the fact that each photo typically gets thousands of views instead of just a few hundred. I also seem to think that 30 photos tell the story just fine, whereas when I did this the old way going from a shortlist of 110 photos to 83 final selections felt painful.

Well, so long Aperture. You were a great app with lots of life left in you and I’m sorry that Apple abandoned you for something younger and mobile-focused.

Dear Aperture, An App That I Love:

When my WiFi is misbehaving, you keep interrupting my work in other apps to report that you’re having trouble connecting to MobileMe. I have never so much as implied that I have any interest in MobileMe galleries. Yet you do this several times an hour.

When you get into this sort of fugue, you’re like a waiter who keeps interrupting my meal and my conversation every ten minutes to tell me that if I was thinking about ordering the broccoli custard for dessert, alas, the kitchen has run out.

This waiter will still receive a gratuity. He is doing the wrong thing, but I appreciate it’s coming from his drive to provide excellent service. Still: 15%, tops.

Just FYI. You do know that in a few weeks’ time, there will be no MobileMe to connect to?

[Edited to add: Yes, darlings, I know how to remove MobileMe from Aperture’s radar. I just think it’s odd that the default position of this app is to attempt to maintain a connection to a service that the user hasn’t expressed any interest in, and isn’t using.]

This mini-review on the Sun-Times site amounts to an outline of the full review I’ll be posting on Monday. It’s the best Mac Apple’s ever made. Which isn’t to say it’s for everyone. And I said in the review that most Mac users don’t care enough about onboard Ethernet and future expandability that it’s a debilitating issue. Which isn’t to say that those shouldn’t be considered faults. But yes, if my editor and I are eager to get something of value up on the site and in print before the week is out, and I try to put everything in 600 words, then this is a review I can stand behind.

Now I’m playing with the new edition of Aperture. This is the sort of app that underscores the real point of the Retina Mac display. The purpose of the 220 ppi screen isn’t to show more pixels. It’s to show more information. Photo work is terrific. Thumbnails are so dense that you feel like you can truly pick out the winners in a sequence of photos without having to maximize each and every one of them individually.

It’s so good that yup, when you do go maximum, it’s immediately clear that the little shadow inside a dog’s eye is actually a self-portrait of the photographer. Click and look closely…you can see my hat and everything.

Anyway. Tune back in on Monday for greater verbosity.