I’m taking a break from work to do something that is only defined as quote fun on quote in my sick little vernacular: I’m setting up a brand new phone. I do that all the time, what with all the devices that I review. This one is special, because it’s a personal phone that I bought during the Black Friday sale last week: a Nexus 5X.

I bought it because, yes, I’m definitely trending towards switching back to Android. The switch to the iPhone 6 was never intended to be permanent, it was just a necessity of getting to know the Apple watch. But it was certainly possible that I was going to stay with iOS. Most of the decision was going to hang on what Google released in September or October.

These new Nexus phones really scored big. I only really cared about three things, hardware – wise: I wanted an iPhone-class camera, I wanted fingerprint security, and I wanted to finally have a battery that didn’t make me want to scream every four and a half hours, which is when I would need to find a new source of power for my previous Android phone, a Nexus 5.

And, well, what do you know: the new Nexus phones delivered all that stuff. The smaller of the two is a better fit for my needs, and the price is absolutely one that I’m comfortable spending on a phone.

I’m not officially back on Android yet. My SIM card is still inside my iPhone. But, yeah, that’s where I’m leaning.

I’ve been setting it up for the past hour or two. This isn’t a reflection of how difficult Android is; it’s a statement about how much of it you can actually customize. As you can imagine, I’m having a ball. It’s great to be able to configure something for my needs, specifically. It gives me the opportunity to think about how I use my phone, and how I can make things easier on myself. 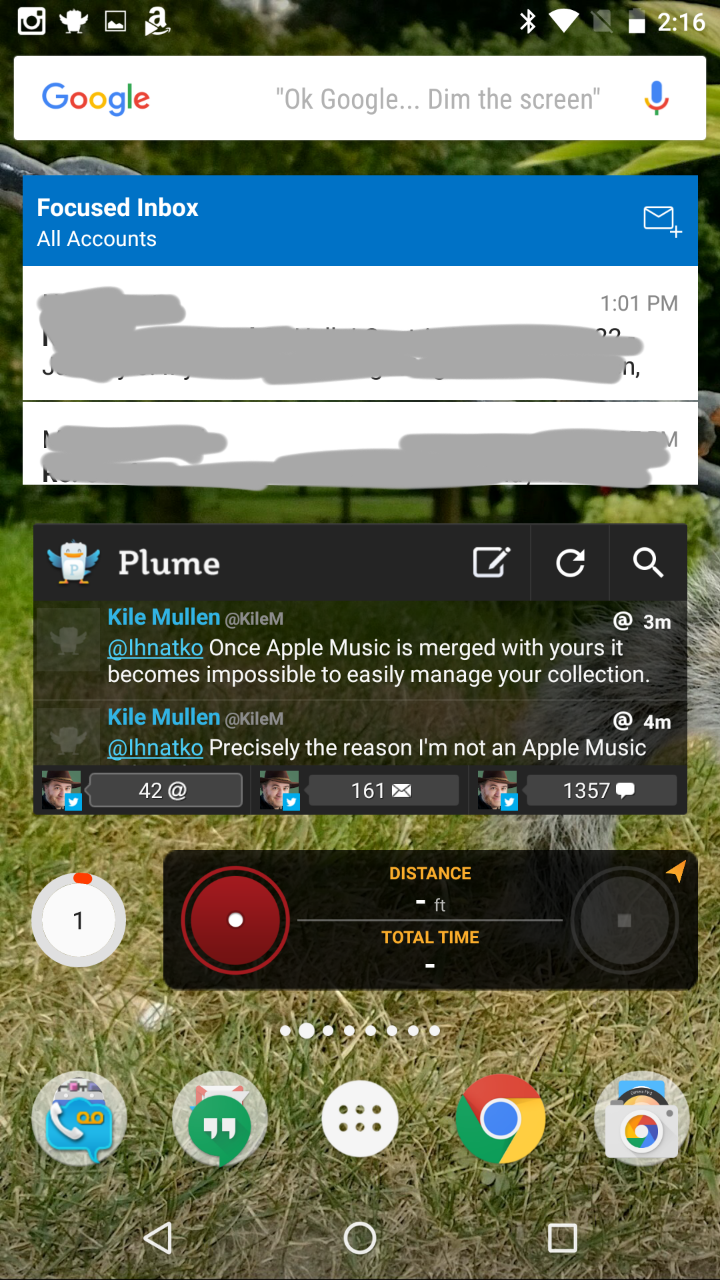 I’m giving a lot of thought to widgets, for instance. I’ve been setting up this new phone so that all of the features I need are always right in front of me, and that I rarely have to launch an actual app. The new iPhone does a good job of this with 3D Touch. Android has always had a version of this solution, in the form of allowing apps to put their most useful features and content right on the desktop.

Mostly, I’m getting my head back in the game of relying on Android as my full time phone, if it comes to that. I’ve been using Android phones all summer, but always just in a casual capacity. Its reminding me of all the things that I like about Android.

One of those things is Android’s Material Design UI. It’s just much more in tune with how I think, and how I want a phone interface to look. Even after three years, the new iPhone user interface still seems so very stark, and isn’t as intuitive to me as the Android design language.

Another thing: I did actually pay for an Apple Watch, to make sure that I would have one in my hardware library forever and ever. I’m a little surprised that I don’t like it so much that it’s encouraging me to stick with the iPhone.

In the end, I think this speaks well of the diversity of the mobile market. The biggest reason why I’m leaning towards Android is simply because I prefer the looks of the interface, and it’s a better fit overall for me. This is maybe the first year when the software libraries are pretty much equal, and the level of hardware is also pretty much equal, and The level of polish and innovation in the underlying operating systems are 100% equal.

We are now free to make a choice based solely on personal preference. And that’s sort of perfect, isn’t it?

(Written completely on the Nexus 5X, using speech to text.)