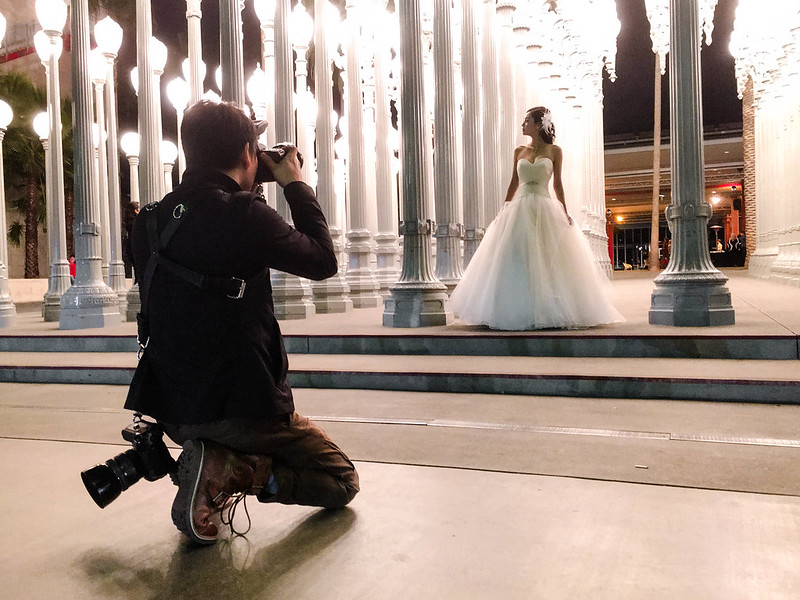 Language is tricky. A camera is a camera is a camera. Sometimes I need to clarify that I’m referring to a traditional device and not a hardware feature on a phone. One answer is to refer to such things as a “real” camera, and yes, please, include the quotes Mr./Ms. Editor.

I won’t do that any more, even if I’d done it half-jokingly in the past. Last night I was at the LA County Museum of Art and happened across a couple getting professional photos taken in their wedding clothes. I was spending the afternoon in tourist mode so of course I had my full Urban Guerrilla camera on a sling, and two lenses. I wound up using the iPhone 6s Plus for this instead.

This photo is about 90% as the iPhone shot it. I did push some sliders around in Lightroom. A hardware generation or two ago, I’d be doing that to rescue the photo. Here, I was just improving it adjusting it to my taste, as I do with the stuff I shoot with my Olympus E-M1.

I’ve been deep-testing the cameras of the iPhone and the new Nexus phones. Modern phone camera photo quality is excellent across the board in flagship-class devices. Now, “it’s a good camera” means it <em>handles</em> extremely well, and (like my Olympus) acts as an extension of my brain’s visual center.

There were a couple of practical (boring) reasons why I used the iPhone instead of the Olympus. Yes, one of them was that I knew it’d make a cool demo photo for my Sun-Times review. Another: I hoped that if I used the iPhone’s burst mode, I might get lucky and catch a frame illuminated by the photographer’s flash.

But just as important is the fact that I trust the iPhone. If I have a tiny window in which to get the shot, I know that the iPhone will come up with a halfway decent photo. (So long as the subject isn’t moving. The iPhone loooovvveeessss slow shutter speeds.)

At my skill level, getting a good photo with the E-M1 in a lighting situation I’ve rarely had to deal with requires some trial and error. A woman in white in front of 200 densely-packed streetlamps at night certainly qualifies.

Sometimes, I even just want a snapshot. I enjoy the immersive creative nature of photography but the risk is that I go into my Photo Trance and I’m no longer really there. In this case, it was the end of a long and fun day, my brain was in “dinner and bed” mode, and I no longer had enough mental bandwidth for immersive photography. I was in “push a button and get a photo” mode.

This year, time and time again, I found myself treating a phone in my pocket as a “second camera”…part of my arsenal, alongside the Olympus on my shoulder, to be used when it felt to me like the more appropriate camera for the situation.

A camera is much more than a good picture. A camera is how you take that picture. Today, a phone camera is manifestly a “real” camera.