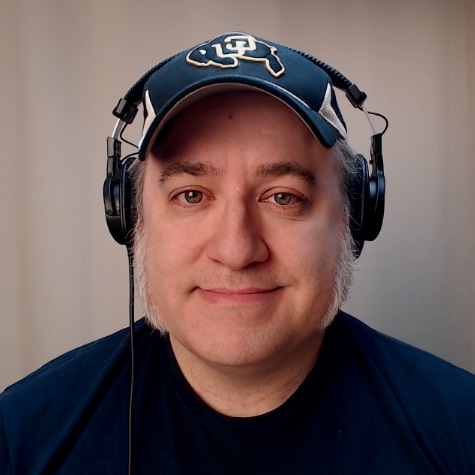 Okay, not bad at all! I’m pretty happy with that.

Oh, not my physical appearance. My apologies for thrusting this odd blob of pixels into your face…sometimes I forget that I’ve literally had decades to make my peace with the sight of this.

No, I’m referring to the lighting. A new piece of lighting equipment arrived for my podcasting studio today and I’ve just spent an hour or so setting it up and trying to get everything dialed in right. Lights have been moved, tilted, intensities have been adjusted, et cetera. The end-result isn’t a tectonic improvement in my home studio’s video quality. But it’s an improvement! This pleases me.

Oy. There was a time when I never needed to do video. Life is pretty sweet for the audio podcaster with delusions of adequacy. Everyone should want decent audio and many can even afford to have terrific audio. Either way, it’s easy to achieve: buy a really good mic (Blue Yeti if you’re on a budget, Heil PR 40 if you’ve got some scratch). Just plug it in and make sure the end of the mic is pointing at the noisehole you’re using to express your thoughts, and you’re done: you’ve got audio that is nearly as good as compressed audio can possibly be.

Over the past five or six years I’ve come to appreciate how much harder it is to get good video. Tricking people into thinking that I’m running a high-class operation is an ongoing challenge on my kind of budget. Even with limitless funds, you can make such a pig’s ear of placing and adjusting all of your expensive lights that all you’ve achieved is the lateral move from crappy ambient lighting to crappy artificial lighting.

Fortunately, lighting gear that isn’t hardened for constant packdowns and setups is fairly affordable and I have plenty of time to experiment. I don’t have to get it all right straight away and after a few years of annual or semi-annual adjustments, the improvements start to add up.

Today’s arrival was a boom stand for one of my two lower-powered lights. My current setup, as it now stands:

And actually, that’s it. It doesn’t sound complicated, now that I look at it. Frankly, I’d feel less silly about my five years of work if there were at least two more bullet points on this list. So:

That’s better. A casual glance of this page makes this look much more technical than it actually is.

I’m relieved to learn that having expensive (aka “the right”) lighting isn’t nearly as important as correctly placing and manipulating whatever it is you have. I think I spent about $120 for that pair of CFC lights and stands, then another $160 for the big halogen softbox a couple of years later, and finally this boom stand cost all of sixty bucks. Quite a manageable list of expenses over four or five years.

I think I’m pretty close to the “smacks of adequacy/well, bless Andy’s heart…he’s clearly trying” effect I’m looking for. I might set up my spare CFC softbox to soften the shadows on the other side of my face. Slightly. The shadows add depth, and if there’s one thing that’s consistently lacking in my contribution to any podcast…

I’d also like to give the backdrop its own lighting. The one overall lesson I’ve taken away from my own experiments and from having been on a bunch of broadcast TV sets is “control everything.” On a network news show even the stuff that doesn’t look like it’s been lit has indeed been lit, which ironically is why everything looks so natural. The human eye has a much wider dynamic capture range than any camera. Making video look “real” therefore requires a narrower range of light values. “Shadows” must be “something lit at a lower intensity.”

Apart from the boom? Well, I decided to switch to a simple backdrop. Previously, the background of my video was the table of assorted ephemera that lives in that corner of my office, plus a spare screen so that I could demonstrate an app or show off a photo via a mirrored display. I was content with this. Then, H. John Benjamin made fun of my setup. I figured that the man must have a point…he’s TV’s “Archer,” after all.

In all seriousness? Yeah. The “wall of random crap” backdrop has been a staple of video productions since the dawn of television, from the first time a set decorator for a DuMont network program filled a goldfish bowl with baby shoes and placed it in the cubby up and to the left of the host.

Other shows and hosts can pull that look off. Alas, I can’t. It’s like a studied four-day growth of beard hair. It looks dashing on Matthew McConaughey but makes me look like someone who’s still trying to find a Walgreens that doesn’t keep its packages of razor blades locked down inside an alarmed cabinet.

I feel so strongly about this “neutral backdrop” direction that I bought an actual photo backdrop plus the rigging. I haven’t gotten around to setting that up, as I need to clear space for it, and if I’m going to clear that space, I might as well pull that whole half of the office apart and give it a good clean, and if I’m going to spend a few hours cleaning the office, I might as well just stay here on the sofa and binge-watch “The Bob Newhart Show,” because that seems to be much, much easier.

Meanwhile, it’s got me thinking that maybe I ought to just buy some canvas and some paints and make something more interesting. It’ll be no loss if I don’t use the white backdrop. It’ll come in handy if Apple ever produces a “talking head” video that can be made fun of, somehow. I suppose I ought to hold out hope; we’ve got to come up a winner some day, right?

The very last item on my to-do list would be to upgrade from my $70 USB Logitech webcam and go back to using a proper camera with a proper lens. My one disappointment with this Logitech webcam is its super-wide-angle lens either distorts your face (and God already distorted my face far more than I’d like). In an ideal world, I’d use a camera with a more powerful lens, mounted five or more feet away. But that means buying a “real” camera with HDMI out, and buying a box that convert HDMI to a form that my Mac and Skype can work with.

That’d run me well over a thousand bucks, I think. It’s way more than I need to spend on what a subtle improvement that only I would really appreciate. Everything I’ve done so far has been possible because of the availability of quite decent bargain-grade hardware, where the greatest outlay is actually the time you invest in experimentation. Which is exactly the right idea in an operation like mine.

If I spent thousands of dollars on professional video gear I’d be no better than those dopes who spend $720 on a custom 9-iron because they they’re under the delusion that it’ll improve their game. It’s easy to trick yourself and lose sight of what the game actually requires of you. 25,000 people bought tickets to hear The Beatles perform in San Francisco and it wasn’t because Candlestick Park had a terrific sound system. I’m pleased that my little home studio can generate video and audio that’s pleasant for viewers and listeners, but even $100,000 in new equipment would produce a fraction of the benefit of simply getting a full eight hours of sleep on the night before the show and spending part of the morning patching the gaps in my understanding of the day’s topics.

Thank you for reading this far. Here are more test frames, in which I engage in progressively dopey behavior: 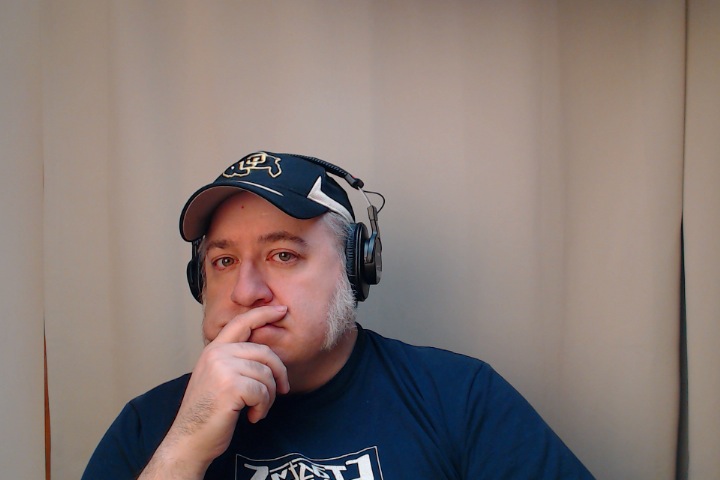 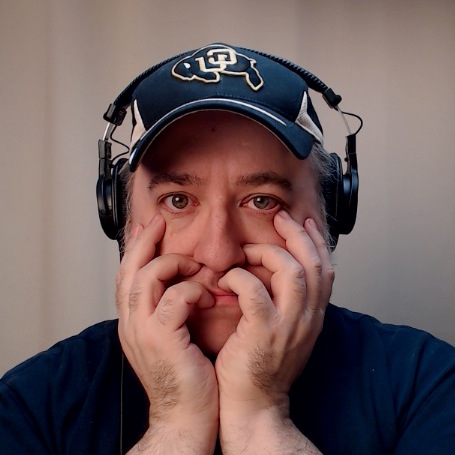 The “Madonna debut album cover” pose, aka “Maybe if I just keep staring at this I’ll work out if this is okay or if I need to tweak things a little more.” 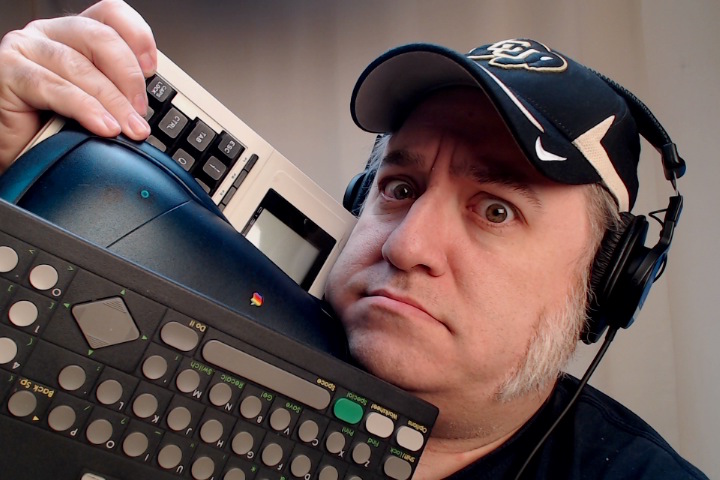 What if I need to hold something up to show the camera? Will the lighting still work well?
And why on earth do I have so many old computers piled up around the office?