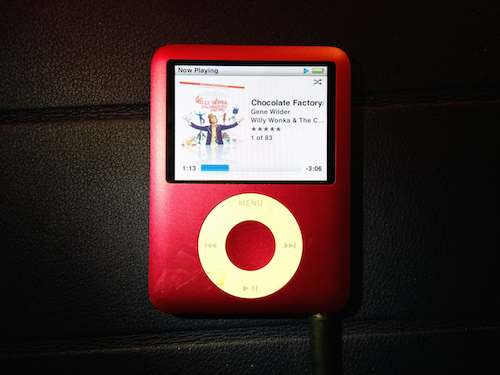 We kick off the season with a double-header, sensation-seekers. We have the pig-bastard greed of the record industry to thank for this: the movie soundtrack to “Willy Wonka And The Chocolate Factory” is only purchasable as a whole album, not as individual tracks.

I ought to approve of this, in principle. Ugh. Seriously? You know I want “Pure Imagination” so much that I’ll probably buy a dozen instrumental tracks I’ll never listen to in order to get it. Jerks.

But I’m becoming increasingly worried that we, as consumers, have been steadily and cheerily grinding away at our favorite musicians’ ability to make a living from their creative talents. Step One: we refuse to buy the whole album just to get the two or three songs we want. Step Two: we don’t want to buy anything at all; we’ll just give the artists a few pennies for the ability to stream their stuff. Step Three: well, why even bother with Spotify? Almost every album in every back catalogue is on YouTube.

The whole system is staring to give off the vague whiff of ammonia that eventually made me stop buying anything via Groupon. The sooner the creative community moves on to a system where I can just put some money in a box and send it straight to the artist, the better.

Fortunately, the “Willy Wonka” soundtrack is just five damn dollars. I’d pay two bucks for “Pure Imagination,” maybe a dime less for “Golden Ticket,” and the whole rest of the soundtrack is three times a bargain at just a buck and a couple of nickels.

Gene Wilder’s performance of “Pure Imagination” is iconic. For years, this soundtrack wasn’t available digitally and my futile searches turned up two different cover versions that tried their damnest to duplicate the song. A Gene Wilder soundalike backed by as much of an orchestra as the producers could afford, with an orchestration as close to the original as they could get away with without having to pay the original arrangement.

This is one of those few songs that had a real influence on me as a kid. It still does, particularly this one line: “If you want to view Paradise, simply look around and view it.” The lesson, as I saw it, was that stop dreaming. You’re here. You’ve been given Paradise; some assembly is required and maintenance is going to be your responsibility.”

There’s also an amazing and subtle message about the power of individuality and cultivating your own mission on this world. Willy Wonka, as portrayed by Gene Wilder, isn’t a freak, an eccentric, or a borderline mental case. He’s a serious man with a specific vision of the world he wishes to live in and rather than change to fit in or complain about things…well, he just went ahead and built his candy factory and created the situation where he could live life as he wants, making incredible things, doing no harm to anybody (small nasty children excepted) and articulating his artistic vision in a way that’s readily digestible (literally) by the outside world. He makes joy, and understands the responsibilities that come with all of that.

I wonder how all of this went over to audiences in 1971. “The Graduate” (1967) and “The Heartbreak Kid” (1972) were, and generally still are, thought of as “important” comedies. Funny, yes, but the humor was powered by the frustrations of a certain generation at a specific point in time. What role has American society laid out for me? How pissed off will it be if I decide to go my own way?

I feel as if Willy Wonka is the guy who shrugged those questions off as irrelevant. Instead, he thought hard, planned well, and got to work making the world he wanted to live in. Ben just floated around in his pool, and Lenny took great pride in the fact that though he had no idea of what the hell he was doing, Society wouldn’t approve.

(Signature scene from “Heartbreak Kid”: Eddie Albert, as the WASPish Old Person™, tries to prevent Lenny from marrying his daughter by buying him off. Lenny’s smug smile gets wider and tighter as the figures keep getting higher and Albert’s voice keeps getting louder. I imagine that in 1972, there were people in the audience who were cheering Lenny on. I was salivating in anticipation of the moment where Albert would snatch the huge bronze eagle off of his desk and then beat Lenny to death with it. Alas, this moment never came.)

“Pure Imagination” is also one of those songs that explains the difference between a movie with songs in it and a true musical. The audience is still getting to know this guy. This song efficiently lets us orient him on the game board. No matter what happens after this point — and yes, some freaky stuff is assuredly going to happen — the kids (and we) are in good hands. This is definitely not a movie where the “quirky chocolatier” turns out to be Jigsaw in Edwardian finery. The movie needs to establish that fact early on, or else it sits at that nauseous tipping point between fantasy and horror. One lovely little song, sung and presented well, and that’s off the To-Do list.

Fiona Apple recorded a cover of “Pure Imagination” to serve as the music for a super-downer message-mercial for Chipotle. The track is exceptional in the sense that I thought it wasn’t possible to knock this piece of music to the ground and beat all of the hope and joy out of it. Well, some people see a distant peak and see only a challenge. I’m not linking to the whole ad because Jesus Christ.

But if you accidentally heard the song, no worries, there’s an antidote. “I’ve Got A Golden Ticket” is a pure, non-ironic expression of delight. It’s hard not to skip a little while you listen to it, and if you have enough self-control not to lift your arms up in the air while you listen and skip, you’re a stronger person than I.

So: five bucks for the whole album. But well worth it, I think. I see that Amazon has this one on its “autorip” list, which means that if you buy the CD, you immediately get all of the MP3s and then receive the CD itself a few days later. And now we’re back to my opening thoughts. I sure hope this is another one of those cases where Amazon loses money but builds customer loyalty. I don’t particularly care that I drove an old car that gets half the gas mileage of a modern hybrid but I don’t want to participate in a transaction that works out great for me but which helps drive a talented musician out of the recording studio and into the real estate business.

Check out “Willy Wonka & The Chocolate Factory: Music From The Original Soundtrack Of The Paramount Picture” at Amazon.  These links are embedded with my Amazon Associates ID and I’ll get store credits based on anything you buy after landing in the store offa my link. I promise to spend said credits on silly things and not blow them on, say, water and electricity.