Having read the article and seen the pictures, I have absolutely no argument whatsoever with that headline.

What is it about movie props that triggers the lizard/monkey/Ferengi parts of our brains? Our powers of critical thought abandon us, replaced with a clear, single urge: WANT.

The Blade Runner blaster is just…I have no words. I support all measures of gun control except for those that would make it difficult for me, personally, to own this gun, specifically.

What a marvel of design! It should have received its own Oscar. How do you design a prop that has a clear, familiar function but is emphatically from a future world that includes flying cars and replicants? This blaster reflects the fact that gun technology might change in 50 years, but a cop’s relationship with his or her gun will stay the same. It can’t look like the remote control for your smart sous vide machine. This weapon needs to reassure the user (and communicate to its target) of its ability to project lethal, irrevocable force.

It’s badass without going overboard, is what I’m saying. If I were a movie bad guy, I wouldn’t worry too much about a hitman who draws a chromed revolver festooned with redundant tri-color laser sights and custom “angel of justice” grips. That’s the kind of gun that you’d give to a cop played by Hasselhoff.

But the Blade Runner blaster! Clearly, a weapon fit for a Harrison!

The above photo reflects a fact that I have the right kind of friends. Namely: the kind who might show up at a dinner party with the Blade Runner blaster replica she just bought. This isn’t the model mentioned in the Kotaku article. It’s a garage prop, I think, handmade by someone who’s such a big fan of that prop that they wanted to make one for themselves, and who got so good at it that they made a few for others to defray the expenses.

Of course, the most famous of the Blade Runner blaster-obsessives is Adam Savage. His name is so tightly bound to this prop that when you type “Adam Savage” into Google, “…Blade Runner” is the first autocomplete.

Watch the video. It’s a fascinating look at how obsessive these prop fans and rebuilders are (he said, quickly adding that “obsessive” isn’t always a negative thing). It delights me to think of a “Star Wars” propmaker assembling Han Solo’s blaster out of handfuls of whatever components they had around the workshop, checking their final work, and then thinking “forty years from now, hundreds of people will band together to try to figure out which component from which model kit or plumbing assembly I used for this detail.”

It’s just an intense level of commitment. Replicating an old prop is often like trying to replicate a Jackson Pollock painting. All Pollock needed to do was splatter paint where he felt it needed to go. The forger needs to put exactly that color paint in exactly the same spot on the canvas in exactly the same way as he did. 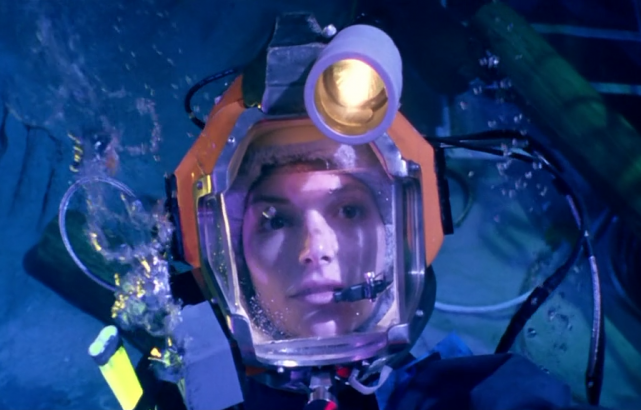 I’ve asked myself if I’m as fond of any one movie prop as Adam is about this blaster. My instinctive answer is “the deep-dive helmets from ‘The Abyss‘.”

“The Abyss” doesn’t take place on an Earth that’s unrecognizably different from our own. But the prop designers’ challenge was much greater than the one faced by the “Blade Runner” crew. All of actors performed their underwater scenes themselves, for real, in a forty foot tank. So the priorities for the dive helmets were, in order of importance:

I’m dazzled by the engineering challenge. “Allow the actors to act” was a big deal for James Cameron. It meant that these helmets needed to achieve the first two goals while still allowing the camera to see the actors’ faces and hear their voices. Another director would have just had the actors loop all of their dialogue back in later, instead of capturing it live on-set. But then, I suppose another director would have thought “we’ll do the underwater scenes with a combination of stunt divers and principal actors on a dry effects stage” instead of “Obviously, we’re going to buy an abandoned nuclear power facility, convert the retaining vessel into the world’s largest and deepest underwater shooting set, and get all of our actors certified with ‘master’ dive ratings.”

Though “The Abyss” was notably one of the toughest shoots in film history, it would have been even harder on the actors if two of their three primary instruments — their faces and their voices — were taken away by a face mask that obscures their expressions and by a technical need to create a vocal performance weeks or months after creating the physical performance.

And yet, the designers achieved the “look real cool” thing. These helmets weren’t fiddly movie props. They were sturdy, functional dive equipment built to the same standards as working production hardware.

Would I spend years trying to build my own “Abyss” helmet, like Adam Savage and other prop replicators? Naw. But I’m cheered to think that if one came up at auction, the bidding wouldn’t be nearly as competitive as the bloodbath that ended with the $270,000 sale of an original Blade Runner blaster.

It’d likely still sell for way more than I could afford, but at least it would be a dollar figure that I could easily translate into units of work. “Twelve columns. I write twelve extra columns that I otherwise wouldn’t — this helmet’s gotta give me topics for at least two — and it’s paid for.” It’d be a nice little fantasy. But no, no, not even then.

I think an Abyss dive helmet on a display shelf in my living room would mock me every time I got back home. “Congratulations on being soooooo careful with money that you didn’t cave in to temptation and buy that $7 takeout burrito for dinner today. Really. Your folks would be so proud. Oh, they still think I’m just a piece of interesting junk that you picked up at the MIT Flea Market for $12, right?”

But…the Blade Runner replica is different! It has LEDs! It’s…it’s a tech item! I’m practically obligated to acquire one for a review, right?

(I bet the maker is one of those selfish stinkers that don’t loan things out, either.)

(Perhaps I should get a burrito for dinner tonight.)