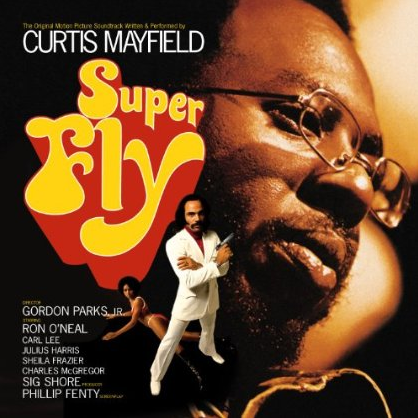 Superfly (Soundtrack From The Motion Picture)

Hmm. I seem to have rushed into this whole Amazon Advent Calendar Thing without kicking things off properly and explaining the point of all of this.

As usual for things on the Internet, the Amazon Advent Calendar countdown is here mostly because hosting fees are very affordable and there isn’t a government agency in place to tell anybody what constitutes “an utter waste of everybody’s time.” This is the fifth year that I’ve recommended a different track of music every day during the holiday season (or tried really hard to, anyway). You can check out previous seasons under this link.

Why do I do it? Because:

It’s become a Beloved Holiday Tradition™. If not for you, then for me. I don’t do much to decorate the house (tree: check; cover up the operative word on my “Happy Halloween” door decoration with a sheet of paper printed with the word “Christmas”…check) and this is how I wear my holiday spirit on my sleeve. Think of these posts as my version of the Griswold Family Christmas Lights. It’s tacky, wasteful, and embarrassing on many levels, but you gotta at least be entertained by how much the guy delights in the undertaking.

It’s a nice break from writing. Which I admit doesn’t make a whole lot of sense, giving that it means I’m taking a break from writing under deadline by writing something else under a different deadline. The difference is that I’m not getting paid to write about music and it’s not something I’m supposed to be doing. And as Robert Benchley once said, “Anyone can do any amount of work provided it isn’t the work he is supposed to be doing at the moment.”

The Amazon kickbacks. When I signed up for the Amazon Associates program, I didn’t realize that Amazon would give me a small percentage of every purchase the visitor made right after clicking on one of my music links. When I signed up I figured I’d be getting a few pennies off of every 99 cent track. I thought that maybe, if things went well, I’d get twenty or thirty dollars in credits. I buy lots of tracks for auditioning purposes as I put together these picks and I usually spend way more than that.

But whoops…no. Some people, God bless them, would click on a link for a Spike Jokes Christmas song I’m fond of and then they’d buy, say, a few dozen 60″ OLED TVs to serve as the back wall of the newsroom set they were building for a television network. Yippee!

The kickback comes back to me in the form of store credit instead of actual money, and it’s not like I can get a Tesla with it or anything. But it does mean that for several months afterward, I can go ahead and buy that axe or that keyboard or that book or that lens that catches my fancy (or a one-off cable or accessory that will let me review a new device more thoroughly) without thinking too hard about it. This, plus my affection for alliteration, is why it remains the Amazon Advent Calendar instead of the Spotify, Google Music, or “I bet someone’s uploaded the whole album onto YouTube somewhere; it’s certainly worth looking” Advent Calendar.

(If someone asks “But isn’t it a massive conflict of interest, given that you occasionally review Amazon hardware and services?” I can only say “I wouldn’t be doing this if I believed it were; I don’t think this is different from writing a how-to book about Apple hardware, or selling books in the iBookstore.” If this person says “I say it is, too a conflict!” then my response is “Ain’t. I respect your opinion and we appear to be at an impasse. Have a candy cane.”)

Day Two of this season’s Advent Calendar falls on the worst travel day of the whole year, aka “There But For The Grace Of God Day.” The Ihnatko operating system is by no means optimized for this kind of use case. Just last Friday, I concluded my business in town at the tricky hour of 4 PM. I considered sticking around through dinner just to avoid dealing with traffic before giving myself a mental slap in the face. “Man up and deal with it,” I gruffed. “Even if it takes you an extra 45 minutes, you’ll still be home two hours earlier.”

I merged onto I-95 and I made it past a whole three exits before I determined that Panera Bread was the better part of valor.

At least I had an option. Control — or the illusion of control — does much to increase one’s sangfroid. Other times, you need to just grit your teeth and remember the part of the Serenity Prayer that goes “GoddammitwhenjesuschristwhenisthisstupidfrackingtrafficgoingtoHEYMOVEgoingto****ing…” etc. This frustration is universal. Skymall sells a special set of teeth engineered specifically for that purpose. They’re available in the official colors of all NFL and NBA franchises.

I hope today’s song will help you if you’re in that kind of situation. The title is “Junkie Chase”; it is featured on the soundtrack of a movie called “Superfly.” It was composed by Curtis Mayfield.

A + B + C = You will feel like a total badass if this music is playing at any point during your holiday travel.

I’m aware that the protagonist in “Superfly” is a coke dealer. But it’s been a long time since popular culture has thought it’s fun to pretend to be a drug dealer.

Preview “Junkie Chase” on the Amazon MP3 Store. Anything you buy on Amazon.com during that visit will result in my receiving a small kickback in the form of store credits, which I promise to spend on heroically silly things.