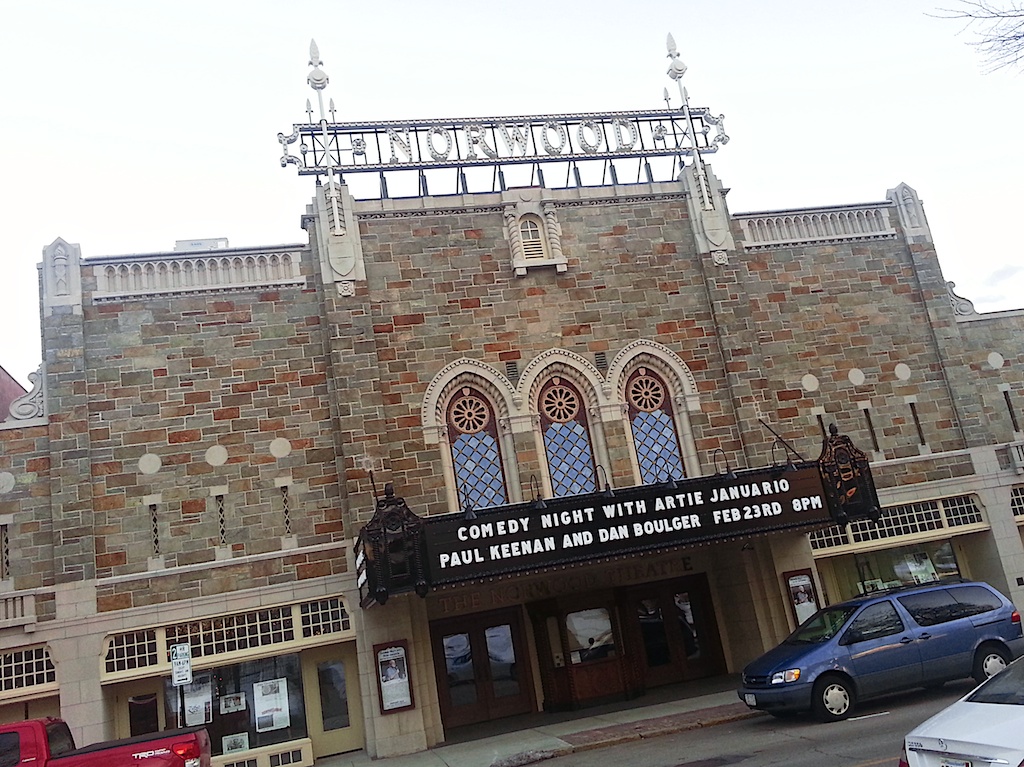 This was our neighborhood theater when I was a slip of a lad. I saw “Star Wars” here during its first run. This fact alone designates the Norwood Theater as a site of extreme reverence for me.

But the theater didn’t look even half this grand in 1977. At that point, it was 50 years old and had suffered through several renovations. The movie industry clobbered live stage performances, and then TV clobbered movies, and then multiplex chains and home video clobbered independently-owned second-run movie houses. At each turn, the theater’s owners needed to change the house to respond to the market and every time that happened, they had less and less money to put into the business.

Last year, its new owners finished an ambitious restoration that rewound the theater back to its roots. They tore down the tacky metal facade that covered up those magnificent arched windows, and rebuilt the tiara-like NORWOOD sign that had been long-gone by the time I appeared on the planet. They turned the second movie screen back into a balcony and fully restored and rebuilt the interior. The theater once again is capable of presenting either movies or live stage performances.

Suffice to say that the Norwood Theater of 2013 in no way matches my cherished memories from 1977. This sort of thing sucks when you discover that corporate fiends have twisted your neighborhood playground into an Olive Garden. But when thoughtful caretakers go to great trouble and expense to restore a theater to a glory that you yourself never got to experience…you’re going to be okay with that.

It’s interesting to see the place like this. “Like this” meaning “Not shabby and tacky.” For most of my childhood, it was a theater that was forced to make a saleable product out of whatever scraps the multiplexes left behind: the lips, ears, and other unmentionables of the film industry. The 2013 incarnation of the Norwood Theater looks like the sort of class joint that won’t sell you a ticket if you’re only wearing a wet bathing suit. I can’t wait to attend an event there and check out the interior.

4 thoughts on “My First Step Into A Larger World”