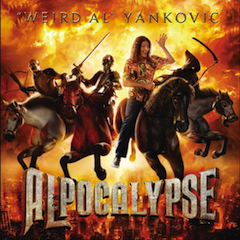 Stop Forwarding That Crap To Me

Last time, I talked about novelty versions of pop songs. I believe (checks notes) ah! Yes, as I suspected: I said critical, sweeping things about an entire genre, and dismissed it out of hand mostly because I, personally, have no taste for it.

This statement is by no means invalidated by my lifelong appreciation for the work of Sir Alfred Yankovic (I know the New Year’s Honours List won’t be announced for another week yet, but look, who are we trying to kid?). I honestly think he’s the present-day successor to Gilbert & Sullivan. Like W.S. Gilbert, he’s a deft lyricist who often composes songs that point out the foibles of current society. Like Arthur Sullivan, he freely, but not exclusively, bases his music on familiar tunes.

“Stop Forwarding That Crap To Me” works great at face value. It’s every frank conversation you’ve ever wanted to have with That Guy in your address book after his forwards have finally exhausted your last scrap of patience. But do take a moment to really listen to it as a piece of music. Appreciate the agility of the lyrics and don’t ignore that it’s been set to a lovely little tune with a graceful structure.

I’d pegged this song as a wAG original. But no less an authority than Wikipedia informs me that it’s an style parody of the music of Jim Steinman, who (ibid) is a songwriter best known for passionate first-person anthems like “Total Eclipse Of The Heart” and most of the music from Meat Loaf’s “Bat Out Of Hell.” I suppose the common thread to Steinman’s most familiar songs is that they’re being sung by characters who really, really want you to know how much they’re feeling what they’re singing.

Sir Al made a shrewd choice in singing “Stop Forwarding That Crap To Me” with more of a plaintive tone than an aggressive one. Think of the context: as with many of Steinman’s signature songs, the singer is speaking directly to one person. As with none of them, however, the singer knows he has the option of just creating a new filter that automatically routes everything from that address to the Junk folder.

It’s been noted that Lord Al’s career has far, far exceeded those of the performers he’s parodied. It’s easy to see why: by definition, he’s always learning new styles of music. Thus, his act has never atrophied, grown stale and irrelevant, or resigned itself to the dustbin of nostalgia and PBS concert specials.

Plus, it forces him to keep working at it. Over the course of three decades he’s gone from figuring out the chords to “Another One Bites The Dust” to acquiring a vast portfolio of skills as a performer, composer, and arranger. I would be very, very interested in seeing a musical or a movie with an original Yankovic score. I can’t imagine it being anything less than good.

Try or buy “Stop Forwarding That Crap To Me” on the Amazon MP3 Store. Anything you buy on Amazon after clicking that link will result in my getting a small kickback in the form of Amazon store credits…which I will spend on gloriously silly things.