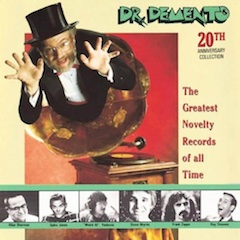 (It’s kind of uncanny. The show lasted for about twenty or thirty years, and the good Dr. worked hard until the end. But he could have played the same four Weird Al Yankovic songs, plus “Last Will And Temperament,” “Fish Heads,” “Existential Blues,” and those few others nonstop and he’d still made at least 60% of his audience very, very happy.)

It’s only just now occurred to me that this show was a unique lifeline for songs like this one. “Everybody has at least one novel in them,” the saying goes. The same is probably true for songs. The Dr. Demento Show was a safe haven and a nurturing incubator for thousands of people who recorded exactly one awesome song. Just one wonderful and twisted tune that could only have come about through precisely the right alchemy of life experience, musical ability (or disability), and chemical interference. Most of these songs were like the metal in Captain America’s shield: they were the residue of a holy accident that could never be reproduced with the same success.

(Yes, I’m talking about the same environment that curated and promoted songs like “My Baby’s Got Rabies.” Work with me, people.)

What other show would have provided a forum for such niche tunes? Radio and commercial music distribution couldn’t have helped these people. As the chairman of GM once said, regarding their initial lack of interest in building electric cars, they’re in the business of making and selling things in the millions, not in the tens of thousands.

It all points to the 21st century as some kind of creative renaissance. Each one of us has powerful discovery tools that make radio and other forms of conventional marketing far less important. It’s still not easy for an artist to sell a million records to the entire market of potential listeners. And Lord knows there are very few recording artists who wouldn’t like to have the sort of success and security (and homes and cars and drugs) that a string of serious hits can create. But if you don’t create that kind of music, it’s easier than it once was to sell records to just those 10,000 people who love, not like, that same kind of music. And because these independents are getting (in effect) an 88% royalty on each sale instead of 15%…well, it’s pretty easy to see the Win of having started your musical career after 2008 instead of before.

That said…no self-supporting artist wouldn’t be absolutely thrilled if just one of their songs were used in a TV show or a movie. But…well, “Glee” is watched by just so damned many people, you know? An artist can still rail about your independence after they’ve bought a reliable car and a year’s worth of health insurance.

Don’t you dare call “Existential Blues” a “novelty song.” Today — just as when I first heard this song back in junior high school — I’m impressed by the agility of the playing and the composition. It’s as though Steve Martin and Arlo Guthrie collaborated on an uptempo number. It has Steve’s methodically-dadaist construction. No, goddamnit, that isn’t a contradiction in terms; it refers to the ability to put weird, incongruous, stream-of-consciousness thoughts together and then take a step back and rationally decide if they function together to create a sort of harmony. And it has Arlo’s solid tunesmithing and his askance perspective.

It almost has an operetta feel to it. There’s a flow and a complexity, and it contains multiple themes that support each other. I wonder if producing this with a full band would open up the song even more, or if it’d make the whole thing collapse.

Of course I went and Googled to see what Tom “T-Bone” Stankus has been up to. I can only find a website with some contact and booking information. I’m not terribly confident that this information is current; it’s, um, kind of an old site.

Yyyyeah. I hope T-Bone’s doing great, wherever he is. The site mentions that he does shows at public libraries, and has some photos of him performing at kids’ events. I’m sure he’s great at those.

Try or buy “Existential Blues” at the Amazon MP3 Store. Anything you buy anywhere on Amazon after clicking that link results in my receiving a small kickback, in the form of credits…which I promise to spend on fun and foolishness.