I suggest that you capture this page immediately, before the Government strongarms my webhost into pulling it down.

The video you see here, released just a couple of weeks ago, is NASA’s latest attempt to pull the wool over the public’s eyes. It purports to be an innocuous demonstration of the superior data-collecting precision of the Lunar Reconnaissance Orbiter. To the left is a topographical map of the lunar surface, based on 2005 Unified Lunar Control Network data. To the right, the new dataset collected by the spacecraft’s laser altimeter.

Fine. I suppose NASA didn’t expect one of the “sheeple” who support their operations through their tax dollars to break free from the herd and actually do some, you know, research. Even a cursory glance at the facts demonstrates that this story is clearly hogwash.

Do you have any idea how good the ULCN dataset is? Pretty goddamn good, that’s how good it is. It’s been under development for decades and it includes data that was collected by men who were actually standing on the freaking moon at the time. It’s not just based on the ravings of non-tenured loafers splayed on sofas with game controllers in their hands and Cheeto dust all over their Doctor Who tee shirts. If any of that ULCN data were wrong, don’t you think it would have been spotted and fixed by now?

Of course. It’s ridiculous to think we’ll ever be able to see the surface of the moon any more clearly than the folks who knocked golf balls and drove SUVs on its surface did. Which is we have to discard NASA’s claim that the difference between the 2005 ULCN image and the 2009 LRO image represents “improved data.”

No, this updated map points to only one rational conclusion:

THE MOON IS GETTING POINTIER.

NASA has done a poor job of distracting us from the fact that the Moon has always been slightly egg-shaped, with the widey bit facing the Earth. Clearly, the problem has only gotten worse and worse over the years. I’ve isolated a frame from the video which demonstrates the severe scale of the problem. 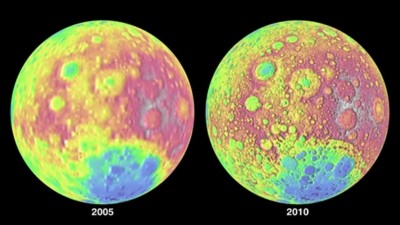 Scary isn’t it? What happened in the past decade to cause this kind of rapid change in just five short years?

I bet NASA already knows the reasons why. I also bet they really don’t really care. They’re not in the business of expanding scientific knowledge. No, their real business is protecting their budget. So why even bother with the cover story? Let me lay it out for you: 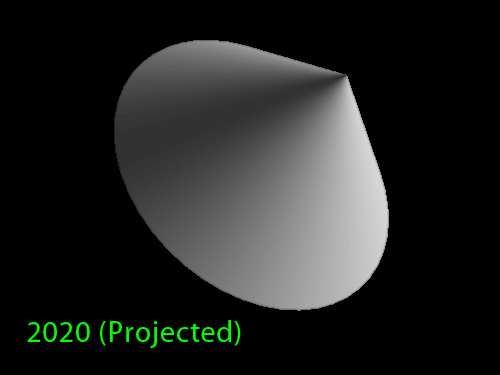 (I assure you that this is a precise simulation based on hard data. Whose imagery are you going to trust? Mine, or some so-called “experts” who apparently don’t even know that the Moon is supposed to be gray?)

You see the problem. Where the hell are they going to land on this thing? If they try to land on the top bit, the descent module will get speared like a cocktail olive. True, the bottom of the moon will become nice and flat and it seems like an ideal landing site. But don’t forget that the Moon is always spinning. Even if the astronauts use their fancy spaceman math to make sure they land when the flat bit is nice and level, they’ll only have, what, an hour or so before it’ll start to tip. And then, whoosh! The lander and the flag and everything will slide straight off and crash straight back to Earth.

And that’s why NASA is spreading this “Oh, don’t worry, everybody; the Moon isn’t getting pointier, the LRO data is just producing a better topographic dataset than we’ve ever had” ruse. They had to say something…and they were desperate to get a cover story out before the holidays. The Moon is right up there in the sky where everyone can see it. Everybody who got telescopes for Christmas was bound to notice that the craters and stuff look a lot edgier today than they used to.

Obviously, they can’t get away with this forever. Lord knows what kind of claptrap NASA will spread a few years from now, when the Moon gets so cone-ey that the change is clear even to the naked eye. But by the time the truth is beyond denial and everybody starts demanding answers, NASA will already have cashed that fat quarter-billion-dollar check, packed up their RVs, and moved on to their next big scam, in the next big yokel-filled city.

You and I, dear reader, are privileged to have wrapped our greedy fingers around the Truth at least five years ahead of everybody else. It’s our responsibility to get the word out. I don’t expect that the world will accept our conclusions. They’re a culture based on dogma and superstition, instead of rational science.

(Dammit. I didn’t know that WebKit had deprecated the “blink” tag. That phrase really ought to be flashing, for maximum effect.)

But we still have an obligation to spread the word about this quarter-trillion-dollar boondoggle. Just remember: every time they come back at us with patient counter-arguments instead of immediately accepting the purity of our Science and praising us for being clever, skeptical thinkers, it just means that they’re idiots.