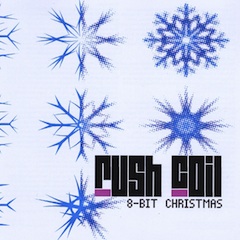 Carol of the Bells

You’re all very correct to think so highly of me, sensation-seekers. Not only do I have an unfailing moral compass, but I often subject it to abnormal magnetic fields just to test its unfailing-moral-compassness, so that I can then make adjustments, as necessary.

Witness this selection. Also witness the fact that the link goes not to the Amazon MP3 Store, but to iTunes. See, there was a differrent track that I wanted to recommend, but it hasn’t been formally published anywhere (more on this, anon). So I went off looking for something similar that I liked just as much, and I found this track by Rush Coil on iTunes.

Cool. Then I went to Amazon.com for the link. Alas, they don’t have it.

Were I the possessor of a fallible moral compass, I’d have chosen something else. “Screw you, the trusting reader of my work!” would have been the statement. “Don’t you feebs realize that the whole point of this Advent Calendar exercise is to line the velvet pockets of my Amazon account with gift credits, so that I may purchase things like a Novelty Electronic Yodeling Pickle without ever asking myself ‘Why the hell do I waste me money on crap like this’?”

But no. I assure you that the primary purpose of here is to share music that I actually, genuinely like. And the prime mover for choosing Amazon instead of iTunes isn’t the kickbacks (though they’re very, very nice. It’s because I know that anyone can click an Amazon link and hear the music sample and buy it without having to download and install a separate app. If it were an iTunes link, you could only do two of those three things.

Listen to “Carol Of The Bells” on the iTunes Store.

Allow me to close off this meta portion of the post by confirming that my strength is as the strength of ten men, for my heart is pure.

Onward to the song itself. It’s been a slow build, but “chiptune” music (songs that sound as though they were being played by the soundchips in vintage game consoles) has steadily made its way from Novelty to Meme to a legitimate, established genre. And I can honestly say that I like this version of “Carol Of The Bells” on its own merits, not because it’s such an odd way to arrange and record a tune.

I guess the lesson is that “on its own merits” is a very, very complicated thing, even with more traditional music. Pandora.com has got it exactly right: there’s a molecular profile to every song that links it backwards to every song you liked before you heard this one, and forwards to every song you hear after it. And the metrics of this phenomenon go beyond tempo, instrumentation, and vocals. There’s also a sense of time and place.

“American Graffiti” was the first big pop-culture phenomenon that underscored how powerful the phrase “Gosh, this is just like the stuff I liked when I was a kid” is in influencing what we like as adults. It’s true that your favorite songs in high school and college will almost always remain your favorites as you enter your thirties and forties and fifties. They have their own merits, yes, but they’re enmeshed with other pleasant memories, like a wad of gum in a shag carpet.

(Bad simile, Ihnatko: a shag carpet is a pleasant memory for no man or woman. Except for those who owned a carpet store in 1972.)

This sort of reaction isn’t quite as mainstream as “This song was playing on the radio the night I first made out with the woman who would one day become my wife.” But “Oh, man, this is just like the game that I spent all summer trying to beat in high school!” works, too.

(Aside: and “Carol Of The Bells” is clearly the soundtrack to a “jink your spaceship up and down and left and right, and shoot at waves of attacking aliens” kind of game. Other chiptune songs are clearly “sidescroller combat games.” Games are so burned into your subconscious that you can even pick out the nonviolent “momentarily stun the cartoon lizards and pick up the flowers” games as well.)

Let’s not get mired in that junk, though. I like chiptune music because by necessity, it launches a very clean and no-nonsense attack on the melody. It’s why a four-piece jazz combo can accomplish things with a song that a spongy 40-piece orchestra can’t. Every instrument and every melodic line is front-and-center and there’s no room for extraneous flourishes.

I mean, I’d love to get a hold of the soundtrack to the “Batman” Game Boy game. I long ago gave my Game Boy and all of its carts to a nephew (your correspondent can be quite a dope). But a vid of this game is up on YouTube. The music is a little sparser than I remember it, but yup: I’d definitely buy this track if it were available anywhere.

Which brings us back to the chiptune track I wanted to recommend. It was an version of “Mele Kalikimaka” arranged by “Mafialligator,” a (god-damned) genius on Something Awful’s forums. He’s released four annual collections of Nintendo-ized holiday music, under the series title “A Very 8-Bit Christmas.” 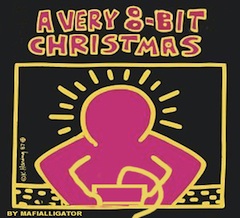 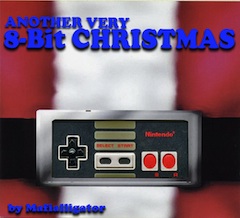 The bad news: no, you can’t buy “A Very 8-Bit Christmas” on iTunes or Amazon.

The good news: it’s a free download, according to the descriptions on Something Awful.

The bad news again: …but there’s no new release this year. And the older releases are old enough that they’ve aged back behind Something Awful paywall.

So I’m in kind of a pickle, here. And not the electronic yodeling kind. I’ve located other download links for the albums. But are they legit? I dunno. I’m going to post one set of links here, because as near as I can tell the content is behind the Something Awful paywall only as a “it costs us money to host these files” sort of thing, and not because access to these tracks is an exclusive perq of Something Awful membership. I’ve also been unable to find any links to Mr. Mafiassassin’s own site.

The Page Of Chiptune Christmas Links In Question.

But head straight to the “Very 8-Bit Christmas” links first. Did I say that I was going to recommend “Mele Kamikimaka”? I meant to say “It’s Beginning To Look A Lot Like Christmas.” No, wait: “Have Yourself A Merry Little Christmas…”

Yeah, there are plenty of winners, here. Mafialligator has real skills as an arranger. He’s not just copying down notes from a simplified set of sheet music. These are true, polyphonic performances.

These tracks get plenty of airplay in my house during the holiday season. When I set up and decorated my Christmas tree this year, I was listening exclusively to an “8-Bit Christmas” playlist.

(Streamed to my Apple TV from my iPad via AirTunes.)

(My parents and grandparents would recognize the melodies and the phrase “decorated my Christmas tree.” The rest of that would have required extensive explanation.)

Well, as I said, I went ahead and selected an iTunes track even though the link won’t win me a single sou in associate-link kickbacks. But if you’re really keen on kicking my back a little, or you’re just wondering if I was making up that thing about the Yodeling Pickle:

This link is embedded with my Amazon Associates code. And after you click it, all of your Amazon purchases will result in a commensurate percentage of the final tally coming back to me in the form of gift credits. The fact that I was well aware of the existence of this consumer item indicates the fine, fine ends to which I will be applying these credits.