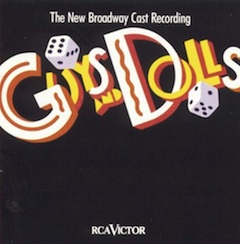 Damn. This is the third Monday in a row that I’ve chosen a show tune as an Advent Calendar selection. We all have a little bit of OCD in us and something now compels me to simply designate Monday as permanent Show Tune Day.

Hey, no problem: I have dozens of favorites. But how will this affect my quarterly P&L? Does my usual Monday traffic respond to content of that type? Can I compensate for any dips in the metrics with some more finely-targeted SEO?

I really don’t know. I barely can explain what any of those terms mean. But writing a paragraph like that makes me feel like kind of a big shot and there’s every chance that paragraphs like that one will elevate me to the sort of speaking gigs where rich people hope to get even richer. The buffets at those kinds of conferences tend to be exceptionally good; in addition to my speaking fee, $5 for a box of store-brand Ziploc baggies can parlay itself into saving three weeks’ worth of grocery budget.

This track is from the early-Nineties revival of the classic. It’s also known as the show that made Nathan Lane, Peter Gallagher, and Faith Prince into stars who could get paid far, far more money for working way, way less hard. It’d definitely be one of my Desert Island Discs. Here they are, performing this number on TV:

It kind of breaks my heart a little. It’s such a damned shame that these legendary productions dry up and blow away after the original cast moves on and the show closes. You can buy “Riding The Bus With My Sister” on DVD. You can see “Family Guy” every hour of the day or night on multiple cable channels. It’s cheap, low-grade horsemeat but it’s on film and it’s on video, so it’s going to be preserved somewhere.

Live theater? It was made to be seen live. From both a creative and a legal point of view. I made this lament to one of the many people in this world who are smarter than I am and they explained that it’s not as simple as plonking a few cameras on tripods in the theater and hitting the “Record” button on them before the curtain goes up. Everyone on the stage, everyone in the orchestra, and everybody behind the scenes has a financial stake and the negotiations between all of the respective trades to make a video production happen generally aren’t thought to be worth the trouble. It’d be easier to move a suspension bridge a bit to the left.

So: if you want to see that episode of “Two And A Half Men” where one and a half of the men have a farting contest inside a closed car and the one man loses when he craps his pants, you’re in luck because it’s in a boxed set. If you want to see the 1992 revival of “Guys And Dolls,” well, that’s just insane.

I’m picking this specific song chiefly because I heard something absolutely wonderful about it last week, during a “Fresh Air” podcast in which Michael Feinstein talked about the career of Frank Loesser…the show’s composer. I already knew that Sam Levene, the show’s first Nathan Detroit, was hired for his skills as a character actor. He was an awful singer. What I didn’t know, and what was absolutely stupidly obvious when Feinstein mentioned it, was that Loesser baked a melodic support system into his one big song.

Not only are all of his notes in the same octave…but the melody “walks” him up to the right note. If Levene had to simply sing “Sue Me…” he’d have been completely off-key. “Hire-A-Law-Yer-And…” lets him dialing it up closer and closer to the “real” lyric.

Isn’t it neat? This kind of machinery was lurking inside this song all the time, unnoticed by me.

Stage music is full of tricks like that. Like Loesser, Mozart had to write music for “The Magic Flute” that would help a very weak Papageno get through his big aria. The orchestra plays his entire melody before he has to sing it…and it ends on the note that he has to start on. It’s a built-in cheat sheet!

Mozart’s first Queen Of The Night, on the other hand, was his sister-in-law and a renowned soprano. Listen and you’ll notice that she gets no help whatsoever from the orchestra. If anything, the orchestra has to keep up with her. Meanwhile, the composer is throwing everything at her he can to make sure that she dies a deathly death of dying.

Listen to “Sue Me” (From “Guys And Dolls”) on the Amazon MP3 Store.

When you click that link, any purchases you make during that Amazon session will result in my receiving a small kickback in the form of Amazon Gift Credits. I shall use them to buy silly, but manifestly wonderful, things.