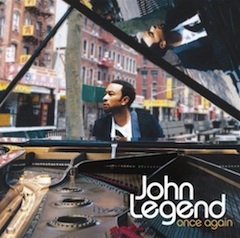 This is a masterful song. No other observation or rumination should go ahead of that statement. It stopped me dead when I heard Legend perform it on TV, and then after I bought it (immediately following the show) I kept tapping a button in iTunes to hear it again.

Legend’s singing and production on this song remind me of one of Aesop’s fables. The wind and the sun are arguing about which one is stronger. Actually, the wind is doing most of the arguing. He sees a man walking along a road below and demonstrates his power by lashing down at him with full force, trying to blow his cloak off of his back. He doubles and redoubles his force, which only makes the man hold his cloak around himself even more tightly.

The wind is spent. The Sun makes his point by simply radiating. The traveler walks a few hundred yards, and releases his grip on the cloak. A few hundred more, and he undoes the clasps. And soon, he’s taken it off entirely and slung it over his shoulder.

John Legend’s performance here is all about radiance, not force. It’s simple and unadorned and maybe because of that, you open yourself up to it. It’s a very moving piece about a soldier worrying about his family back home and hoping that he lives to return to them. Failing that, he hopes that they’ll carry on without him. It brings the stakes of war home to you in a way that no hammy flag-waving eagle-soaring power-anthem, nor any smug and heavy-handed hippie ballad, ever could.

I’m sure that it resonates personally with just about everybody. “Coming Home” is an intensely personal meme. A sufficiently advanced and exotic method of observing and mapping brain activity would rely on this phrase as a trigger. “Think of coming home,” the technician tells the subject. The scanner can ride that thought through the entire operating system.

Turn that thought over in your head. When was the year when you felt like you were leaving your home and traveling to your folks’ house? Even if you were staying put, there were many years when you described it as “I’m not going home for Thanksgiving this year.”

I suppose everyone would define this differently. You kind of automatically make the switch when you get married. Even if there are a few fuzzy years after you start co-habitating, it almost certainly happens by the time you have kids.

It’s fuzzier still when you’re single. I tend to define “home” as that place where I have access to (in alphabetical order, to show no favoritism) my family, my friends and my Mac. Which actually means that if I have the third thing, I’m practically 80% there.

Every year of my life (at least since 1989, when I got my first Mac) I’ve spent Thanksgiving with one of the first two groups. This year, I spent it with the third. I didn’t discourage Thanksgiving invitations, nor did I fish for them. For reasons that would be dull to discuss, I felt like this would be a good year to spend the holiday alone in thought. By Wednesday morning, my options still seemed to be open, so I committed…by purchasing a quarter-turkey and the other required elements of a Thanksgiving dinner.

I did receive a couple of invitations late in the game, but I politely declined them. I made a pie Wednesday night at 2 AM. While it baked, I snuck outside with my SLR on a tripod to take photos of an absolutely brilliantly-clear starry sky. I got to bed very late, but I woke up early enough to watch the parade. I started on the bread dough. I watched a movie during the first rise. After I got the bread started on its second rise, I went for a long drive. When I got back, I prepped the turkey and got it in the oven. Kipped on the sofa for another movie on Netflix. Started shuttling pans of rolls through the toaster oven and got started on the beans.

Everything came out great. I spent the rest of the night reading a new book, and iChatting with friends to compare notes on their own Thanksgivings. At 1 AM, I had a turkey and cranberry sauce sandwich, on homemade bread. This, I’m sure you realize, is the whole reason why I bothered to cook a full, proper Thanksgiving dinner instead of just making a pot of pasta.

I wouldn’t say that it was the very best Thanksgiving I’ve ever had. But it was up there in the top five, and the reason is pretty simple: I was Home. I can’t say that I stopped at any point to explicitly enumerate all of my many blessings in life. I didn’t really need to. They were all around me.

Today’s another one of those Worst Travel Days Of The Year. Or so the many press releases in my Inbox tell me. Whether you’re spending Sunday leaving home or returning to it…safe travels to you.