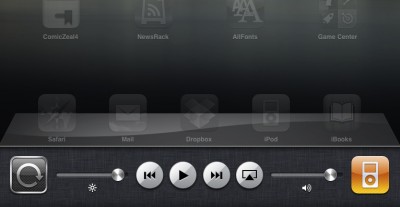 I’ve now updated my iPad and my Apple TV to today’s new editions of iOS.

I’m already loving AirPlay. It’s such a natural way to integrate all of your devices that contain media. The desktop edition of iTunes, plus any app on the iPad or iPhone that deals with media, has an AirPlay button. Tap it and you’re presented with a popup list of all of the devices on the network that can stream AirPlay audio and video. It’s the same basic mechanism as when you decide to plug something into a set of amplified speakers. It’s spontaneous and it works.

Mostly. I did get one stall-out when I tried to stream HD video from my iPad to an Apple TV. But for the record, the initial frame from “Up” was, er, stunning.

As it happens, I’ve been working from the sofa all morning, and streaming tunes from my MacBook’s iTunes library to the ATV. An hour ago, I’d choose my music by picking up the ATV remote and peering across the room. Now, the TV is just the output device. When I wanted to pause the music, I tabbed to iTunes and clicked. It’s a subtle distinction but a powerful one.

The good news is that my Apple TV seems to manage multiple inputs with grace. Obviously I can’t select it from my iPad if my MacBook is actively using it. But if the playlist ends, or I hit Pause, the Apple TV immediately becomes available to other devices.

A clear Win. When I reviewed the Apple TV I said that it was a tough choice between this and the new Roku boxes (which are cheaper and also support older analog TVs). The OS updates reinforce my conclusion. If you’re mostly looking for a way to watch Netflix movies, you might as well save a few bucks and get a Roku. But if you’re already putting most of your media in iTunes libraries, you definitely want the Apple TV.

I already miss the “rotation lock” function of my iPad’s new “Mute” switch. Honestly, I can’t imagine a single circumstance under which I’d be grateful that Apple made this change. It’s not like it’s a colossal pain in the butt to have to access the screen lock via the Home button, but it’s annoying enough.

On the plus side, the Home widget deck also includes a screen brightness control. That setting always felt like it was a bit buried.

As expected, AirPrint doesn’t care that my HP printer is connected to the network via an Apple Airport Extreme base station. The HP doesn’t support AirPrint so no dice. Oh, well.

Also as expected: fast app switching is a huge win. Particularly when you’re reading books. It’s as though I always have my current book at my elbow, opened to the current page. I can check my email and then return to Suzanne Somers’ latest book right away. AirPlay works just fine in the background, incidentally. You can be reading a book in iBooks while your iPad streams our music in the background.

(Though there were a couple of quick cuts in the audio early on, likely while the playlist was still buffering to the Apple TV. Playback has been perfectly smooth every since.)

The second semi-transformative enhancement of multitasking: pre-4.2, newsreader apps would hold my iPad hostage while it spent ten minutes downloading hundreds of new blog pieces. Now? I can still look at email or read while it grinds away in the background.

Or at least the app will once I update it to iOS 4.2. As with the iPhone, many of the goodies of the OS require new (but usually free) updates to old apps.

I’m starting to think that the true competition in tablet space just got pushed back another six months. HP certainly has some interesting things planned for WebOS, but that’s all still speculative. Android slates are hopelessly stalled; they can’t even pull out of the garage and head for the starting line until Google releases the first tablet-oriented edition of Android. Even then, there’ll be the delays and caveats associated with all Android releases.

In January of 2010, I believed that by December the iPad would be the front-runner but there’d be some interesting competition to be found. Now, despite the Samsung Galaxy Tab (which I like a lot) I’m wondering if there’ll be any credible and mature competition before summer.