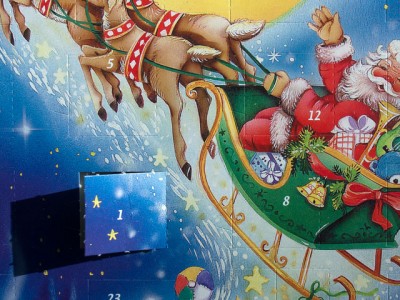 I’m single. This means that holiday traditions are tougher to maintain. When you have a spouse and kids, your Sleigh of Life tends to find the familiar ruts of late November and early December on its own. You walk into the house one day and immediately realize that someone has replaced all of the Glade Plug-In Scents cartridges with the kind that smell like gingerbread, and you immediately realize that this is the weekend you need to go out and buy a tree.

It’s different in my house. Last year, I didn’t actually get my Bachelor Tree set up and decorated until a few days before the holiday. And the house only smelled of the usual aroma of vaguely-overstressed electronic components.

But I’m really going to go for it this year: that tree’s going up while the box that my Swanson’s Single-Serve Microwave Thanksgiving Dinner is still in the kitchen recycling bin. And I’m going to start my Amazon Advent Calendar the week of Thanksgiving, instead of the day after.

For those of you who are new to my Beloved Holiday Tradition, it’s a simple concept:

So: if you should happen to click the link to listen to a sample of the song I’ve picked for the day, and then you should happen to remember that you were going to order your Aunt Boadicea a Velocity Micro :x775 six-core gaming PC, my Amazon account will be credited for a percentage of $5000 retail price of the PC that you purchased, as well as anything else you might have bought during that same Amazon session.

You have my word of honor that the accumulated Amazon credits will only be used to purchase Fun Things that I wouldn’t normally buy for myself. Recently, I bought a rather nifty Panasonic pancake lens for my Micro Four Thirds camera. It’s an excellent example of how I use my Amazon credits. I love shooting with it, but it’s well above my Automatically-Approved Impulse Buy level. Rational, responsible thoughts would have triggered a mandatory counter argument of “Yes, but you already have a perfectly fine wide-aperture lens for the SLR” and then a cheerless response of “I guess.”

In previous years, I’ve rather defensively explained this concept in every Advent Calendar post, and also included a link to the same song in iTunes. I’ll try to do the latter but will dispense with the former. I agree that Associates links can be slightly tricky for someone in my line of work. I did give it a lot of thought a few years ago and reached a few conclusions:

1) I certainly can’t profit in any way from any Amazon item that’s even remotely tech-related. But when I recommend music and books and movies, I’m doing it as a civilian.

Which is why those two Amazon links I just embedded are just plain-jane store links. If someone were to email me and complain “You only wrote favorably about the iPad because you get an Associates referral kickback from everyone who clicks the link and buys it!” then yes, he’s clearly just a cantankerous pain in the butt. But even CPitB’s can raise a valid point every once in a while. I think I defend my opinions — whether they’re positive or negative ones — in the things I write. Nonetheless, it’s so very easy for me to remove this one source of potential skepticism.

I also concluded that

2) The Associates program allows me to get paid for some of these fun things I write without burdening my readers in any way.

3) Damn. It’d be nice to have a MacBook Air, or an ultrawide fixed-aperture zoom for my SLR, or one of those gadgets that can extract the seed from a mango in just one stroke.

So. Do keep these things in mind. If you were planning on doing lots of your holiday shopping at Amazon, and you happen to make those purchases after clicking one of my Amazon Advent Calendar links, then: awesome. Otherwise, enjoy these tracks. Because I sure do.

Another part of the tradition: I start it off on a daily schedule, inevitably lose a day due to the slings and arrows of outrageous deadlines, and wind up making anywhere from ten to two-dozen posts.

I think this is the fifth year I’ve done this. Here are links to previous years’ offerings (at least here are the ones I’ve posted since I switched the CWoB to WordPress a few years ago):

If you never want to be distracted by anything else on the Celestial Waste of Bandwidth, bookmark this link right here. It’ll always take you straight to the 2010 Advent Calendar entries:

I’ll close this intro by pointing you to my BFF John’s Movie Year project. A couple of years ago, I indirectly inspired John to try to see and review a new (to him) movie every day for an entire year. He cruised through the year and then, like Forrest Gump when he reached the edge of Alabama, decided to just keep on running until he runs out of movies.

I’m mentioning this because at some point, maybe it’s going to be really late at night and I’ll have put off the day’s Advent Calendar post until the end and I’m in bed and I just plain will fall asleep in mid-sentence. And then my daily 2010 Advent Calendar streak will end.

I solemnly believe that by inspiring John to post something interesting and well-written every day for nearly two years, I’ve sort of purchased Carbon Credits from him that allow me to claim compliance with the desired standard.

Postscript: I’ve just noticed something on my Advent calendar. Santa seems to be dropping off either copies of Google Chrome, or the Mac OS’ Spinning Beachball Of Death. Ho-ho-ho indeed.