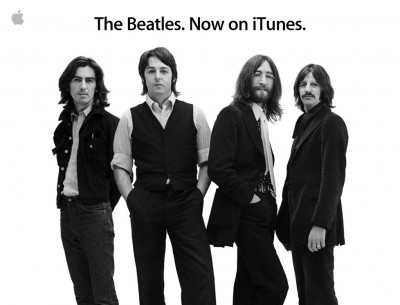 Yes, It’s The Beatles. Which surprised me a little when I became convinced of it last night because in recent weeks I’d been working under the theory that bringing the Beatles catalogue to iTunes was a high priority only for Apple…not for the Beatles or EMI. Record companies would like for us to buy the whole CD if they can. CDs still account for something like 80% of all music sales and The Beatles might be the only group whose albums are so valuable as entire units that the public would be just as happy to rip the discs themselves.

I think it’s more about exposure than unit sales. The Beatles broke up just about when I was born (I had nothing to do with it, I should add). So when I entered that phase where I started to develop my personal musical tastes, much of this music was already nearly two decades old.

Today, this stuff was released forty years ago. Was I terribly interested in The Andrews Sisters or Eddie Cochran Domino when I was 18? I was not. It doesn’t matter how good “Twenty Flight Rock” might have been…it was ancient and remote and it was nowhere on my radar.

So I think it’s more a case of EMI and the Beatles trying to give the music an extra push to make sure it’s available — and that it seems fresh and relevant — to new generations of listeners. Why did the Beatles license their music for Cirque du Soleil? Why did they allow a special version of Rock Band? Why does Yoko allow footage of John Lennon to be used in commercials?

It’s all down to the same reason. The Beatles don’t need the money. What they really want is to make sure that “Hey, Jude” remains part of the world soundtrack. They want to ensure that future generations, like every generation since the Sixties, will have that one Beatles song that resonates so deeply with a specific moment in their lives that the first few bars will always stop them cold no matter where they are or what they’re doing. A move towards the iTunes Store is yet another move towards that goal.

What does this mean for Apple? I dunno. I still can’t say whether or not there’s been a tidal wave of pent-up demand for digital downloads of The Beatles and if it’ll translate into another comma being added to Apple’s quarterly profits statement. It’s definitely an important acquisition, for the same reason why signing Letterman was an important deal for CBS. In an increasingly-crowded market, it underscores the message that Apple, and iTunes, is where it’s all happening and that there is indeed a difference between the iTunes Store and Amazon MP3.

As for me…I’ll tentatively say that I called this one correctly. I didn’t embrace the Beatles rumor, but I didn’t reject it, either. I was consistently saying that it would be a content announcement as opposed to a “new feature” one, though I wasn’t certain what kind of content it would be.

I didn’t start to have real confidence in the Beatles story until late last night, when a bunch of additional assets came through. Before then, all we had were a bunch of theories about what the wording of the announcement was and what the clock faces represented. Apple does like its puzzles. But I resolutely insist that someone who insists that it was all clearly spelled out in vague title fragments and by the fact that “there could only be one reason why Apple included four of those” is probably also someone who fell for the “Paul Is Dead” rumors back in the Sixties.

I reckon they did a little too much LDS back then as well.

I won’t be buying these tracks. Like most people, I already own the CDs. I even bought second copies of two or three of my favorites when they were remastered and re-released. As usual, if I really like the group or the album I don’t bother with MP3’s. I’d rather buy the disc. I get the whole album in an uncompressed format, and over the coming years I can easily remaster them into new digital formats. 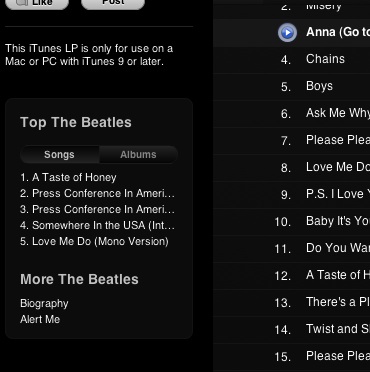 I’ll predict that it won’t be long before “Press Conference In America” gives up its longstanding top spots on iTunes’ list of best-selling Beatles tracks. I know, it’s shocking…it’s like when “The DaVinci Code” was knocked off of the #1 spot on the New York Times list.

What can you say? Musical tastes are fickle and the producers of those interviews should just be proud that their work had such a long and well-received run.