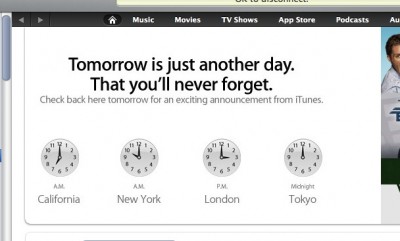 Interesting: this image appeared on Apple.com’s front page today. It was also the standard top-page banner in the iTunes app (which is where I first saw it a moment ago.) At 10 AM tomorrow (Eastern time) Apple will announce…OK, something. I haven’t any firm idea of what it’s going to be.

But it’s a Monday morning, so let’s see if we can’t goof of of work all the way until lunchtime by engaging in extracurricular speculation.

Point One: Apple doesn’t tend to stick its neck out this far unless they think they really do have something big on their hands. So they probably won’t be naming Paul Anka as their featured artist of the week. Secondly, it’s definitely not a hardware item. That’s not an iTunes-specific announcement. Besides, if it were hardware, Apple would have released it weeks ago to get a jump on the holiday season.

It seems likely to be some sort of extension to the scale of the iTunes service in general. I’m guessing that it’ll either be an “iTunes Anywhere” feature (stream your purchased content to any of your iOS devices or one of your five approved desktops; it’s seemed inevitable, ever since Apple bought Lala.com, a streaming music service last year) or it’ll be a new deal that dramatically expands the range of TV programming available for purchase and rental.

The odd timing makes me lean towards the latter. Apple’s never done a big “Hey, everyone, look at us” announcement like this so close to the holidays. I presume that whatever-it-is would encourage people to buy more Apple hardware, or that it’ll position them extremely strongly against competition; otherwise, it seems like you’d want to hold off on an announcement until you could get more attention for it. If Apple suddenly had lined up deals to deliver the majority of popular TV shows to their software and hardware, then they’d suddenly become the presumptive leaders in Internet TV and the $99 Apple TV would suddenly become a very hot gift for 2010.

And it’d be a very bad news day for supporters of Boxee and Google TV. Consumers are still waiting for that last, clear, compelling reason to hook up a WiFi-enabled box to their TV sets: the first service and device that delivers close to a full range of broadcast and cable programming will likely end the competition before it really began.

My other reason for suspecting a new pile of TV deals is that by their nature, negotiating with all of the corporate entities that control TV content is a frustratingly nonlinear and analog process. I can easily imagine Apple hoping, or even expecting, that they’d have closed all of these deals in time for the annual iPod announcements last month…but that things dragged on another few weeks.

(I can picture the new head of NBC Universal listlessly prodding at the plateful of kitten hearts Apple presented to him as requested. “They’e tasty,” he said, “but unless I get to eat them while children are watching me in tear-stained horror, it’s not really a full meal, is it? Can we try this again in a few weeks?”)

As usual, though, we’ll only know what we know when we know it…and Apple doesn’t want us to know until 10 AM tomorrow.

The time is also possibly an interesting data point: whatever it is, Apple wants every news outlet to have the story in time for the day’s broadcasts…and the stock market will be open and trading when the word gets out. It’s got to be something big. Hell, they don’t even mind that we can record MacBreak Weekly at our usual time with this information firmly in hand. Wow!

[Update: But the pointed use of world clocks keeps me wondering. It implies “everyone in the world will be able to take advantage of this,” doesn’t it? If that’s true, it could point to either conclusion. Streaming is a basic extension to your entire iTunes experience and would apply to all users equally. But so would an expanded marketplace. Either one would require a lot of new deals to allow Apple to send content worldwide.

A deal to send this week’s “House” to Japan would seem to be more complex than one to allow streaming of purchased content. But remember that a new streaming feature could also stream that TV show. So maybe it’s six of one, half a dozen of the other. I’ll be shocked if it isn’t one of those two possibilities, though.]

[Update #2: I’m going to stick to the “expanded content” theory. I can’t imagine that Apple could implement a feature as broad as “stream your purchases anywhere” without a LOT of updates to the desktop and mobile editions of iTunes. There’s streaming technologies in all of these apps but I don’t think Apple would want to do it as a straightforward service that uses standard, right-out-of-the-box functionality.

Apple just released a major new edition of iTunes last week. If this was in the offing, AND I’m correct in assuming that they couldn’t enable streaming without a new iTunes…surely they would have waited another week.

Unless, of course, all of the infrastructure is already in iTunes 10, hiding. I’m not sure that the code wouldn’t have been discovered by somebody over the past two months, though.]

64 thoughts on “An Exciting Announcement from iTunes tomorrow?”