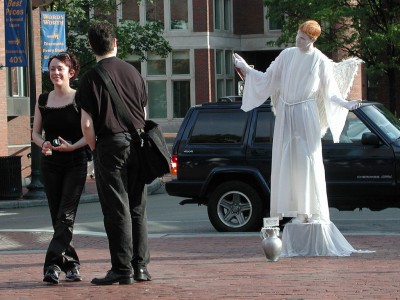 An Angel of Death (or perhaps just an Angel of Street Performance) hovers near Wordsworth Books in Harvard Square. Photo by me.

WESTHAMPTON BEACH, N.Y. — Ever since Books & Books opened its doors on Main Street here last month, it has missed out on some of the adulation usually reserved for new independent bookstores in the age of Amazon.

Terry Lucas founded Open Book in 1999. The new location now has less foot traffic.Several storeowners nearby have ordered their staffs not to shop there. Indignant older women have marched inside the bookstore to yell at employees. And someone, or perhaps several someones, may have sneakily placed used chewing gum between the pages of new books.

The animosity seems to have stemmed from the fact that Books & Books moved in when there was already an independent bookstore, the Open Book, around the corner. And as some people saw it, there was no room for another one.

via Books and Books Arrives and Sides Are Taken – NYTimes.com.

Actually, I originally followed a link via Fark.com. But that’s beside the point. I thought this was an interesting article. It demonstrates that it’s possible to be a Darwinist consumer — to feel very strongly that you’re doing the right thing both as an individual and as a logically-minded citizen — and to still feel like a jerk.

I’m sure there’s a proper academic economics term for this idea. What I mean is that when I patronize a business, it’s solely because of the level of service that they provide. Every transaction is a selfish one. I don’t buy things to make a political statement or to support A Way Of Life. I love bookstores. I just don’t particularly care if any given shop survives or not.

And yet, I love books and I love independent, locally-owned businesses. What can I say? It’s a complex world.

When the first Barnes & Noble opened up in my old neighborhood, I was thrilled. But local, independent bookstores were up in arms, crying about how this was another tragic case of Huge Corporations putting the screws to honest, decent, local businesses. They were vocal and active, trying to draft other businesses and community organizations into forming a grassroots movement of some kind. All I can say is that they certainly put way more time and effort into getting articles into the local papers than they ever did in courting me as a customer of their shops.

Before the Barnes & Noble opened up, there were only two or three bookstores within a short drive of my house. Two sold nothing but sappy romance novels and other books solely of interest to Ladies Who Sew Little Outfits For Their Pets. I distinctly remember walking into one of these shops and getting a glance that communicated “We have less than $20 in the register” the moment I wandered within range of the owner’s trifocals.

The third seemed to be little more than a storage area for the owner’s book collection. It was a secondhand shop — I love secondhand bookstores — without any organization to it whatsoever. During the colder months, I believe that one or two area homeless people would build a little igloo of books and live there, warm and unnoticed among the other shapeless heaps of great literature.

I walked into this new Barnes & Noble for the first time. And here I saw thousands and thousands of books covering nearly every topic. Multiple clerks would help you find whatever you were looking for. The wide, well-lit aisles were dotted with comfortable club chairs and you were welcome to just sit and read for a couple of hours if that’s what you wished. “This ain’t a library, kid!” was articulated solely through the sentiment “…none of your tax dollars are paying for this.”

Inevitably, those three locally-owned bookstores went out of business. It was (I hope) the only time I had an actual, practical demonstration of a favorite phrase I had once come across:

“I could watch this die and feel nothing.”

I wasn’t pleased. I wasn’t unhappy. These stores had absolutely no relevance to me.

I should draw a distinct line between the awful stores in the suburbs and the fantastic ones in downtown Boston and Cambridge. As a kid, I used to make regular excursions (involving a bus and two different subway lines) to Harvard Square. First, I’d hit Wordsworth. Then, I’d rummage through the two or three used bookstores along Church Street. Finally, I’d wander around in the Harvard Bookstore and get lunch at The Greenhouse while I read my new treasures.

My book-buying habits smoothly transitioned over to Amazon.com when the time came. But I still kept brick-and-mortar bookstores in the loop. Amazon’s automated recommendations are often uncanny and the discounts can be the difference between being able to afford an art book and having to let it go. But no online retailer can replicate the experience of wandering through aisles in search of a book that you don’t know exists, but which will become your consuming focus after reading just the first twelve pages.

I’m satisfied with the logical reasons that define my book shopping. Nonetheless, I felt a pang of complicit guilt when I hit Harvard Square one winter day after a long absence and found that the enormous Wordsworth store — which had occupied the entire crescent of that block and defined the Square for me since the first day I got off at the Harvard stop on the Red Line — was vacant. They’d gone out of business a few months earlier, after two unprofitable years and an inability to compete with Amazon, Barnes & Noble, and Borders.

I absolved myself by noting that (1) I stopped going to that store because I rarely had an excuse to be in Harvard Square; (2) As much as I liked the idea of this bookstore, my book-buying needs were being better served by Barnes & Noble and Amazon.com…on a personal level, it was simple Consumer Darwinism.

My basic book-buying scheme remained in place. Amazon.com was for search-and-purchase missions. Brick-and-mortar stores were for “discoveries.”

Great. And then I got a Kindle, and it left me with a big, big quandary.

I just don’t buy physical books any more. If a book is in print, it’s probably available via the Kindle store. If it isn’t, I can wait until it shows up in the catalogue, and I’ll almost certainly find a different ebook that I’ll like just as well. And if the book I want is out of print, it’s far easier to locate a used copy on Amazon.com than in a secondhand bookstore. Even if the store in question isn’t studded with street people living in forts made from Jackie Collins novels like my late and unlamented old neighborhood used bookstore.

And when I buy secondhand books through Amazon I am indeed purchasing them from local, independent sellers. They’re just not local relative to me, that’s all.

Where does that leave my local bookstores? I still drop by to browse. But my old system has stopped working. If I discover a great book at the store and I buy a digital edition for my iPad, it feels a little bit like shoplifting. And yet I know I can’t pay $23 for a physical book that will do nothing but remind me to buy the $9.99 Kindle edition when I get home.

Fortunately, my favorite stores still sell magazines, and cards, and other things that spin in the close orbit of hardcovers and paperbacks. I’ll happily spend $15 in other departments; I feel as though I’m paying the store their “finder’s fee” while still getting items of useful value.

I have to be honest and say that I’ve no idea where this is all going. I’ll be terribly, terribly sad if my favorite regular bookstores close their doors…but I don’t know what I can do to stop that. They no longer sell a product that I use on a regular basis. As a kid, I couldn’t imagine a future in which I’d describe a book that way. But I also couldn’t imagine a device which weighs little more than a single hardcover but represents a reading library of…

(hang on, I’ll actually count them out)

…eighteen books, close to a hundred comic books, and dozens of feature-length articles. To say nothing of all of the movies and music I’ve got on this thing.

Back to the New York Times article. I confess that I can’t see what all the fuss is about. A new bookshop opened up “about a dozen storefronts away” from another bookstore, and that’s gotten a lot of people upset. If it happened in my neighborhood, I certainly wouldn’t be yelling at the new shop owner, or sticking used gum in the pages of his merchandise.

I’d just shop at the better store. I enthusiastically believe in charity for people…but not for businesses.

38 thoughts on “Darwinist Consumerism: What’s the most ethical way to buy books?”