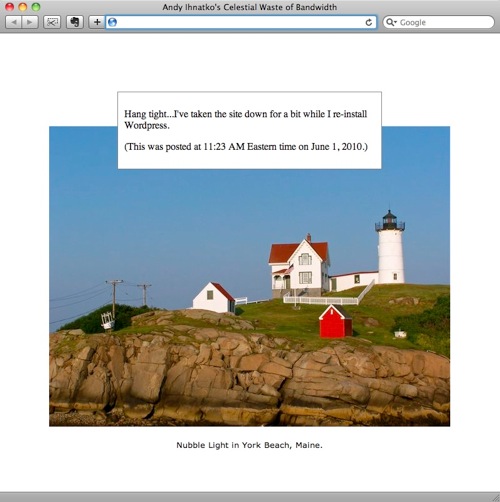 Okay. It seems as though I’ve successfully nuked the whole site and reinstalled everything. I’ve downloaded fresh copies of WordPress and a couple of templates, and restored all of the site’s existing content.

So I think that should take care of the spamlink hack. I’d tried a couple of other tricks last week to avoid all of this work. If nuking it from orbit doesn’t fix this problem for good — given that I’ve changed all of my passwords — then this becomes what is known in tech circles as A Whole ‘Nother Thing.

This was quite a typical 2010 sort of procedure. I’m not a day-to-day WordPress admin, so I needed to spend some time refreshing my knowledge on how to do all of this properly. A couple of days ago I did all of the advance work (prepping for disasters).

All I needed to do this morning was delete my existing WordPress directory on the server and reinstall everything. It should have been about twenty minutes’ worth of work, all told, including making a few edits to some key files so that WP can find my databases. And indeed, that’s all it really took.

Aha. But instead, Ihnatko.com was down for nearly two hours.

Then I thought it’d be cool to have the text overlap the photo a little.

Then I thought I should identify the photo. I Googled for the name of the town and did a little research just in case anybody asked me any questions about it.

Oh, and the dumbest move of them all: I was Twittering as I went. My hostility against CSS inspired snarky, 140-character comments, and on ongoing dialogue with my 35,000 Followers.

Yes, the invisible spam links have vanished. So either I’ve eliminated the redundant PHP scripts that the hack deposited in my WordPress directory, or it’s A Whole ‘Nother Thing and it’ll take a day or two for some bit of code to realize “Hey…Ihnatko.com doesn’t contain spam links” and do that thing that it does to inject the code into the site again.

(Which shouldn’t happen, because I’ve changed all of the passwords.)

Welcome to Stage One of the cleanup. I’ve fixed…

…I’ve fixed the site at my end. It’ll take about a month before Google’s spiders are convinced that my blog is no longer trying to game the ranking system, and ihnatko.com resumes its rightful place in search results.

In the meantime, if any of your office or home NetNanny-type apps are blocking Ihnatko.com because it’s a spamlink farm…please click whatever link the app provides and tell the service to reconsider its position.

15 thoughts on “Ihnatko.com is back up! Aren’t you LUCKY!”