1) Breakfast, consisting of a wheat bagel and a Diet Coke. Purchase price: $1.74.

2) An iPad. Which cost me more than the breakfast.

People have been asking me “So which iPad are you planning on buying?” and I still don’t know how to answer, even though I’ve actually bought one now. I’m not anywhere near the average consumer.

So instead, I’ll tell you what I think about the two major variables in this sort of decision. You’re in on the ground floor at $499. Where should the rest of your money go? Is it even worth buying a better model?

I think the first thing you should spend money on is additional storage. The iPad is going to be one hell of a great content device and my experience with my iPhone tells me that although you can make any amount of storage work, a mobile device pays the greatest dividends when there’s a good chance that answer to the question “Gee, I wonder if I have that file or content with me?” is “Yes.”

This is an especially big deal on a device like the iPad, which comes with a big, gorgeous screen. 16 gigabytes is useful. It means that I can cautiously put a movie or two on it, and maybe a vodcast subscription, and sure, I can have a couple of photo albums on there so long as I don’t go nuts. But 64 gigs means I can throw media on there with the reckless exuberance of a dancing hippie who doesn’t know that the Rolling Stones have hired Hell’s Angels as event security.

It also means that when apps like AirSharing and Evernote come to the iPad, the device can truly be that one electronic file folder that contains every document or scrap of research you’ve touched in the past month or will ever want to lay your hands on.

Put it this way. I’m in a coffeeshop and writing this on Lilith, whose 500 gigabyte hard drive contains just about everything I’ve created and everything that’s ever caught my eye online. If it suddenly occurs to me that what this blog post needs is right here, right now, is a statue of George Washington regarding a lesser public sculpture, I don’t need to hit the Internet for just the right image or head home to my desktop: 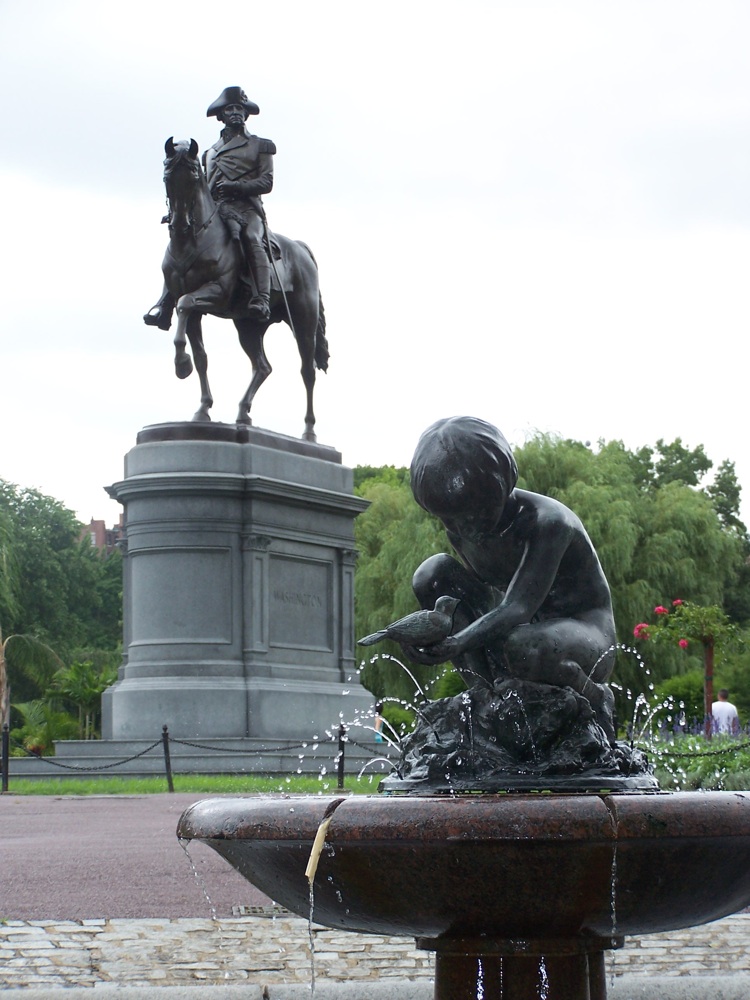 So get as much storage as you can afford, I say.

Onward to the 3G question. I’m starting to wonder if 3G is going to be terribly important. “Internet everywhere” is impulsively attractive, but do you really need mobile broadband? New England is practically lousy with free WiFi. There’s so much radio traffic here that it interferes with the migration patterns of many local bird species. As I entered the coffeeshop this morning I passed by a whole family of wrens, shivering in little Bermuda shorts and wondering what the hell happened.

And if you already have some sort of device that can share its mobile broadband connection — a phone with an app that turns it into a mobile WiFi base station, or a MiFi — the question’s of moot.

Still, Apple and AT&T are offering a sweet deal on the data connection: $29 for a month of unlimited traffic, with no contract or ongoing commitment required. If you want mobile broadband this month, you buy 30 days of mobile broadband. Done.

As a MiFi owner, I’m more interested in the 3G model’s GPS features. Live navigation on a pocket device is lovely. But what can we do with it when the screen is THIS big? What happens when this live, interactive map is flat on a table where three people can peer at it and make suggestions? What kind of car app is possible, when there’s enough screen real estate to deliver a lot of information in a concise and uncluttered way?

If you’re truly seeking my advice, and your funds are limited, I say give the 3G model a miss and put that extra $129 into additional storage, or an important accessory.

If I were an ordinary consumer, I bet I’d be opting for the 32 gig WiFi model, with the wireless keyboard and the desktop dock as no-brainer addons. I think those two accessories will have a bigger impact on my use of the iPad than 3G and GPS. I’d want to own the 64 gig one, but we’re trying to economize in this scenario.

Of course, if I truly were an ordinary consumer, I’d be patient and wait to see what the reviews have to say about the iPad. It’s a rare person who can afford to pre-order a $499 thing sight-unseen. I think most of the folks who are rushing to pre-order the iPad are folks like me who have pre-existing plans for theirs.

What did I actually get? Oh, the top-of-the-line model: The iPad 3G with 64 gigs of storage, due to ship a few weeks after the WiFi-only iPad.

My decision was influenced by factors that would never apply to a regular consumer. iPad 3G, or the WiFi-only model? By one way of thinking, I needed to buy both. I need to have one in my hands on April 3 (meaning: the WiFi edition) but I’ll also need the 3G model because I’m writing a book about the iPad, and the 3G model has unique features.

Damn. I remind you that I am a freelance journalist in a rapidly-collapsing print market. I’m cautiously optimistic that I’ll have an Apple loaner on April 3. I don’t know for sure, mind you. But you need to place your bet before the betting window closes and no matter what I bought, I definitely wanted my pre-order to be near the head of the pack in case models were in short supply.

So I went with the 3G. I did hesitate a bit over the “accessories” question before completing my order. Ultimately, I didn’t buy any.

I already have the Wireless Keyboard and that’s the only accessory that I consider to be a slam-dunk. I don’t wanna drop an extra hunnert bucks, only to discover a month later that the folding easel I keep my iPad in makes Apple’s $29 desktop stand irrelevant, and that I almost never see the benefits of an extra $29 charger.

Why might that be? Because apparently the iPad can charge from its USB sync cable. This is just conjecture, but I imagine that the only thing the 10-watt brick can do is charge it faster. My office is already lousy with USB wall chargers. If it takes twice as long to charge it via USB — I’m just making up a number, here — how likely is it that I’ll actually take advantage of that extra time?

[Edit to clarify: you do get a 10W charger with your iPad.]

There was another factor at play: for the love of God, I was already spending $829, before tax, on this thing. I’m being paid more than $829 for the book so please, shed no tears. Nonetheless, to a freelancer, that kind of an expenditure is like a deacon hearing people whistle in the church. It fills me with a secret sorrow.

All I can tell you is that when I arrived at the coffeeshop, something made me order the 75-cent can of Coke instead of the $1.69 bottle of juice…

93 thoughts on “My Morning Purchases”