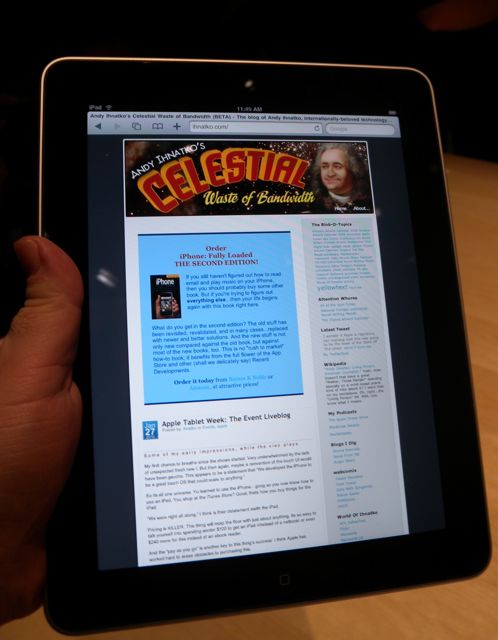 Until Friday, when the release date for the iPad (April 3) was finally announced, all of my iPad-related projects were hovering in Fantasyland. It was great. There would be a lunch, great ambitious plans would be made, and the meeting would end with a mutual chuckle and an acknowledgement that really, the project wouldn’t make any great leaps forward until we knew the ship date and had some idea of when we might get our hands on an actual iPad.

To answer an increasingly popular question: no, I don’t have an iPad. I’m up against a real deadline, too. On the morning of April 4, I leave for a whole week at the Conference On World Affairs. If I have an iPad in my hands, then it’ll be one hell of a great opportunity to test the iPad in a very tricky and critical environment.

I’ve yet to find a computer that works exceptionally well during a trade show or a conference. It’s a bit like selecting a piece of gear for a lunar expedition. Size, weight, power requirements, the parameters of what I need to get done during my time on the surface, and usability in a hostile environment all come into play.

A full notebook can serve any function I could possibly need. But I often leave my room at 8 AM and don’t return until after dinner; that’s a lot of stuff to be toting around all day. The battery only lasts a couple of hours, so I’ll need to bring the power brick and hope that I can find seats near outlets. And in many scenarios — like sitting on a panel — a big laptop isn’t exactly a discreet way to take or access notes.

A netbook? It’s tiny and light and has a four or five-hour battery, so we’re off to a good start. They keyboard is tiny and no fun to work with, though, and even a Hackintoshed one probably won’t run the sort of software I need. As for the iPhone, it lives at the intersection of casual nonchalance and emphatic power, but I certainly can’t write anything with it. And I’ve tried and failed to use it to host the various notes and cheat sheets I often rely on when I speak. It’s just too small.

So as a consumer, you can imagine how keen I am to test out an iPad in this kind of environment. A big screen on a slim device that runs a modern OS and exciting apps, which weighs a pound and a half and is an inch thick, with ten hours of battery life and a wireless keyboard that I can touch-type on? Gimmegimmegimme.

If it works. Which is still an unknown. Again I remind myself and the world that I have more experience with the iPad than almost anybody outside of Apple…which only means “I played with the work-in-progress for a half an hour at the media event in January.”

If I don’t board that plane with an iPad…I would surely be the saddest little boy in all of Puppetland. On one of my first panels of the Conference, I will be distracted by a familiar glow in the crowd. I will lean into my mic, interrupt whoever’s talking, and say “You, in the eleventh row…is that an iPad? Um, can I see it?”

Let’s not even contemplate such a thing. The iPad will go on pre-order on Friday. If thousands of people with no particular mandate from an eager readership will have them on April 3, then so shall I. The worst-case scenario: I simply go to the Apple Store early that morning and look for a bleary-eyed person who looks as though they’re too exhausted to keep a firm grip on their iPad. See, kids? There’s a solution to every problem if you look hard enough, and tell your driver to keep the engine running.

In the meantime, I’m preparing for the iPad. I’ve already bought my first two hardware accessories: the Apple Wireless Keyboard and a Pogo Sketch stylus. 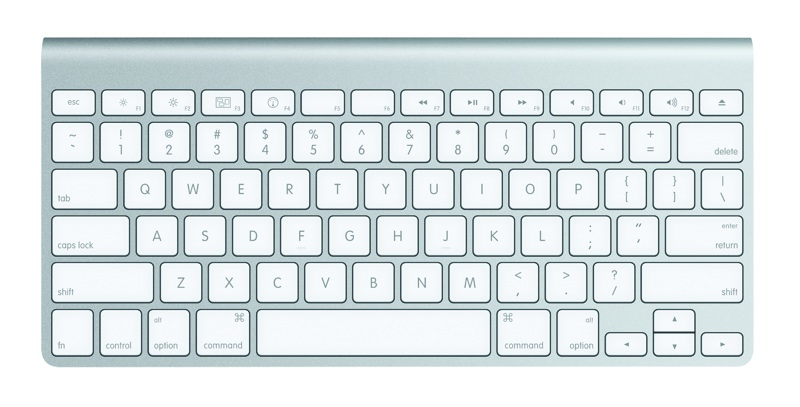 I liked this keyboard the moment it was released. I thought it was v.v.cool. My fellow Americans, I did feel lust in my heart and I wished to own it. But here’s the thing: the main selling point of the Apple Wireless Keyboard is that it’s small enough to travel with. Any computer I’d be traveling with would also, you know, have a keyboard built in.

So I didn’t dare live the dream. Ah, but in January it became something I needed. Nay, I was now practically obligated to buy it because it works with the iPad.

(But for good measure, I bought it with Amazon Associates credits instead of real money.)

I’ve had it set up with my iMac. It really is a lovely keyboard. Photocopy your notebook’s keyboard, scissor out just the bit with the keys, and there you have the Apple Wireless Keyboard. The keyboard deck itself is stupid-thin, but it’s all made out of aluminum so I think I can throw this into my laptop bag (or my Stylish iPad Envelope) with a certain fearless elán. I’m also pleased to find that it’s a handy alternative to my big Logitech diNovo keyboard when I’m podcasting. It frees up space on my desk for the microphone and a recreational beverage. 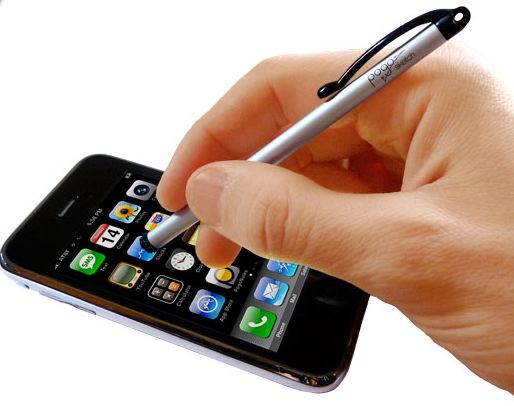 Sometimes my first instinct about a product misses the point. I think that’s what happened with the Pogo stylus, though I hope the official scorer will credit the company with an assist.

When it first came out, it was absurd. The whole point of the iPhone was that you didn’t need a stylus. Using a Pogo was like buying a 60″ HDTV and then projecting 8 mm movies onto the screen, or something. Its only possible selling point, as I saw it, was that it let you use your iPhone or iPod Touch in cold weather without taking off your gloves. Even there, you’d probably look at the original price tag ($25) and decide that cold fingertips would help to build character.

Things have changed since then. The price is $15 and there’s a new Stylus model that has a pocket clip, but that’s not the big deal. Now, there are a whole bunch of great drawing apps for the iPhone.

I bought the Stylus at an Apple store on Sunday, with no sense of urgency. I had time to kill, so I moved on to a restaurant in the mall and started fiddling with a drawing app while I waited for my burger. It arrived ten or fifteen minutes later. I’m not sure how long it was. I had become engrossed in sketching, and my food got a little cold before I finally dug in. 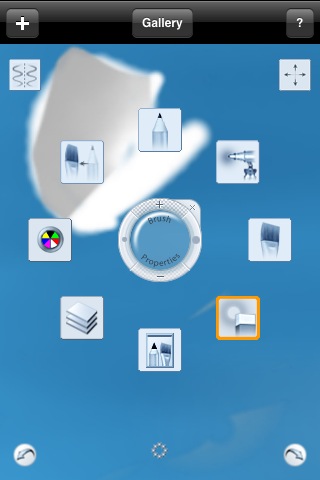 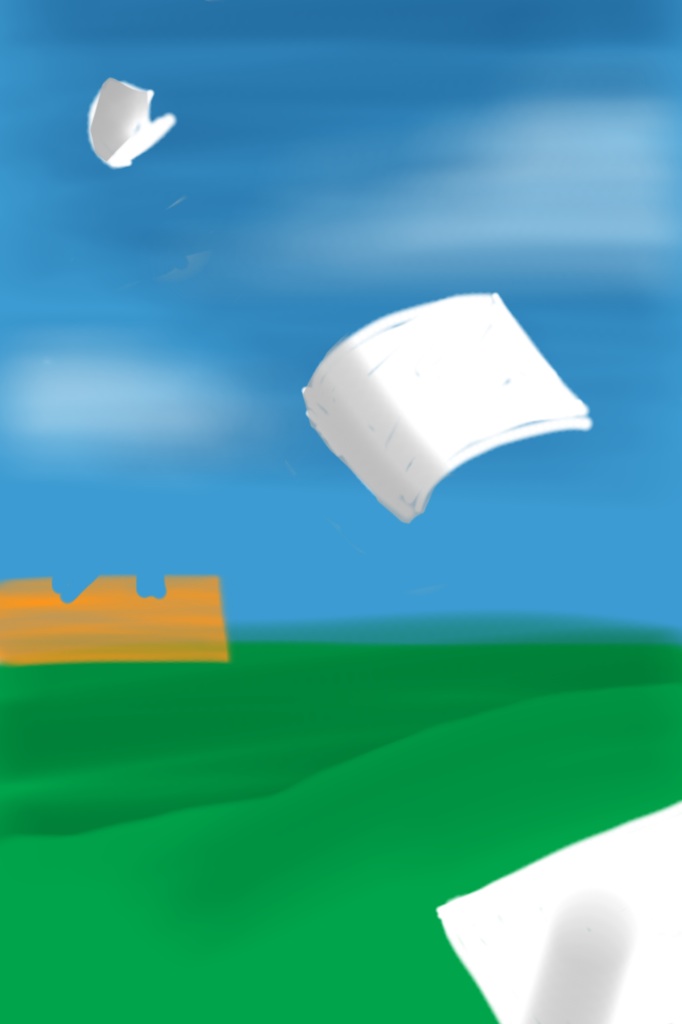 Apps like Autodesk SketchBook (my favorite drawing app) are fun even when you’re just using your fingers. But it’s a different experience when you have a stylus in your hand. The business end is thinner than a fingertip, so it’s much easier to see what you’re drawing. Plus, I stopped painting with my fingers a long time ago. I think it ended right around the day I came home from school with yellow paint inside my nostrils and my Mom yelled at me. Drawing with a pen in my fingers feels more intuitive and natural.

I do have a simple complaint about the Pogo Stylus: you don’t get a little cap or something to protect the drawing end. C’mon, guys. Even an 89-cent Paper Mate ballpoint comes with a cap.

But I can’t even remember the last time I got so engrossed in a drawing that I lost track of the clock. It was another huge win for the iPhone in general. If there’s a single feature that elevates the iPhone from the rest of the pack, it’s the way that it urges and enables me to maximize the amount of time I spend thinking and doing and creating, each and every day. I’ve got ten minutes while I wait for a burger to arrive, three minutes at the post office while as a clerk explains the concept of a “forever stamp” to the unenlightened, six minutes waiting in the subway…it all adds up. I leave the house with my iPhone in my pocket, and I come home with new photos, new drawings, a few tiny things written, many pages of books read, and a better sense of the news of the day.

I accomplished (okay, “accomplished”) all of that in crumbs of time that otherwise would have gone to waste. I don’t get that sort of effect from other phones…least of all from Android devices. If there’s a signature advantage to iPhone’s apps, it’s that you’ll want to use them.

Android apps tend to stop short of being both productive and engrossing. Most Android apps come with a cost: an overall clunky user interface. How motivated am I to draw a picture of the parking lot outside my table? Not very. How much trouble am I willing to go through to do it? Not very much. With an Android drawing app, I’d sigh and end the activity the second or third time I drew a little bit too low on the screen and accidentally activated its Search menu. If it had been a Nexus One in my pocket on that Sunday, it might have occurred to me to draw something with a sketch app but I probably would have just used it for simple distraction: as a way to avoid thinking.

The iPhone can be just as effective as an Android phone as a catalyst for thought-avoidance, of course. That’s not how it usually works, though.

My iPad prep work continues apace. Right now, I’m trying to get my hands on a case or a cover. I’m also trying to line up as much iPad software as I possibly can. The iPad will be released on a Saturday and that’s significant because the CBS Saturday Early Show goes out on Saturday, y’see. Which means that there’s an excellent chance that on the morning of April 3, I’ll be on TV trying to contain my opinions to a smooth four or five minutes of live television. I’m hoping to have a bunch of apps on “my” iPad that won’t be on any of the others being shown off on TV that same morning.

I should mention that The Early Show’s studio is on the same plaza as the Fifth Avenue Apple Store (its big, signature glass cube is only twenty yards away) and my segments usually go out live at about 7:30 AM. It’ll be a total zoo out there. Every specimen of Our Kind Of People will be on full display, excited about getting their hands on the iPad. Needless to say, I can’t wait. I’ve never been at an Apple Store for a release. Usually I need to be up all night writing so I’ll have plenty of stuff online on That Special Day.

I’m 10% sure that I should wear my tuxedo, as though it’s the Oscars and we’re on the red carpet.

I’m also 10% sure that if my segment is at 7:30 and the store won’t allow people in to get their iPads until 9 and I have a working iPad in my hands, I’d probably better wear shoes that are comfortable for running…

37 thoughts on “Rollup to iPad”