This was my reaction upon seeing a certain poster hanging on the wall of Leonard’s bedroom during tonight’s “Big Bang Theory”: 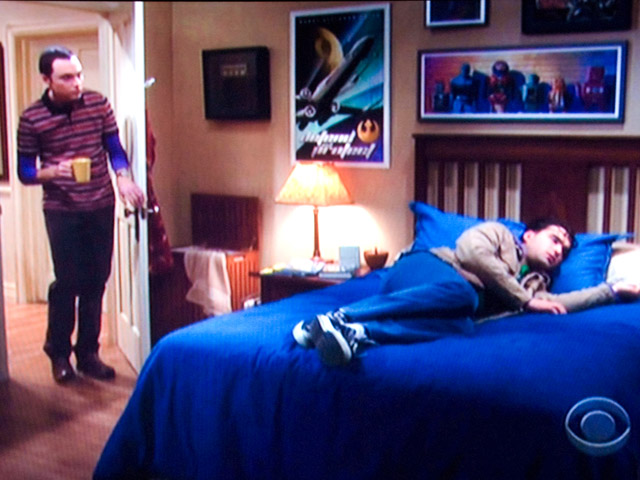 This sort of reaction was a lot more fun before the Internet. That was…um…19…60? 70? Wow, I really should know. Anyway. It was more fun and less expensive. You had slightly worse than a chance in hell of actually finding out who sells the whatever-it-is. More importantly, there was an even smaller chance that you could complete the transaction before the end-credits started to roll and the IQ-halving lust for acquisition had started to subside.

Anyway. So I Twittered appropriately and within ten minutes, a Very Kind Person provided me with a link to a store that has the poster: 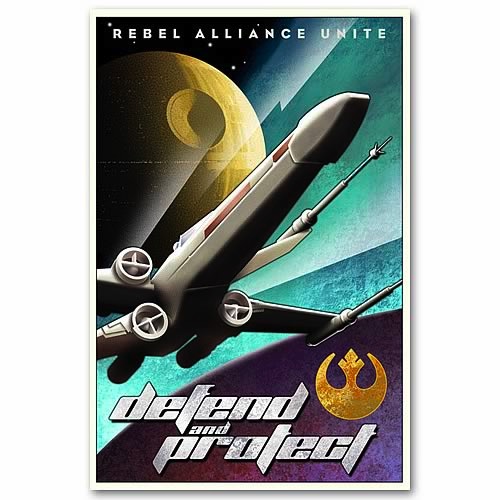 It’s distressing that I sometimes have to walk myself through a decision as though I’m parenting a child. But I know that the kid doesn’t really want to blow nearly $500 on a poster. He just wants to live with the fantasy for a while. It’s unnecessary for me to tell him that it’s nuts; to do so would be an insult. No, I just need to be supportive and patient while he makes his way towards what he knows to be the inevitable end-point.

But it’s hard to drop that kind of cash. The last time I was tempted like this, is was by a con-exclusive Adam Hughes poster of Princess Leia (detail): 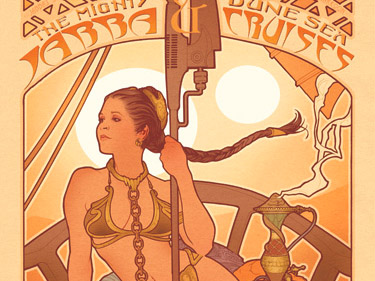 Ah, well. At least I have my Dave Dorman “Battle of Hoth” print to dress up the wall of my TV room.

I bought it from Dave himself, at the one huge comic-con I’ve ever attended (San Diego 1999).

Mind you, if you buy these expensive limited-edition prints, I have nothing but love for you. Hell, I couldn’t tsk-tsk your spending even if I were inclined to. I myself am scheming and plotting and planning to get an Adam Hughes convention sketch in 2010. That’s not exactly a “$20 and a six-pack of beer” commission. And yet if I can make it happen, I’ll consider it cheap at double.

I guess it’s the difference between being Cheap and being Frugal. The $900 I spent on my Nikon D80 a few years ago was the single most expensive toy I’ve ever bought. But it was money well-spent. “I don’t own a spaceship,” I say, when I explain how this camera opened up my creativity and my imagination. “But my SLR comes close.” You know that you spent your money wisely if you think of the thing you bought almost every day, and you forgot completely about the expense the moment the cash left your hands.

I never think about the $900 I spent for the camera. The $4 I lost playing roulette at a Las Vegas Night during college still stings. One, two, three, four: four dollars gone, in four spins of the wheel, in just two or three minutes flat. What a dumbass! It was such an embarrassing experience that — barring quarter-billion-dollar PowerBalls and the nickel poker slots I played at the one casino I’ve ever visited — I’ve never gambled since.

(And for the record: I cashed out my machine when I was $1.35 ahead. They’ve been trying to lure me back to the tables every since. Free flights, comp meals, high-roller suites…those casinos don’t like to see their money walk away and never return! Sad, really…)

Update! Another Twitterer has found the poster for $175! Oh, dear…

15 thoughts on “Lust For Wallcovering”