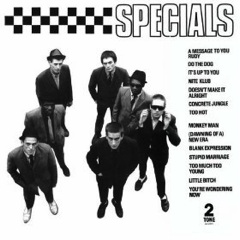 “Monkey Man” was the Amy Winehouse song that I’d originally intended to use on Day 3. It was used during the end-credits of “Run Fatboy Run” and sometime during the third or fortieth time the movie ran on HBO, I grabbed it from Amazon.

Only much later did I realize that I already owned the original version, recorded by The Specials in 1979. It was off of one of my favorite albums, even. Why didn’t I immediately recognize it? Blame the vagaries of how we once consumed music. My first copy was probably a cassette. That’s going back (good God) a quarter century. Once I bought it on CD, my favorite tracks would have gone onto a mix tape; when MP3 set the world on its axis, I only had about a 800K hard drive or somesuch nonsense so I probably just ripped the same three or four tracks that had made it to the mixtape. Everything else dropped off the face of the planet.

The needle swung back to its proper position once the cost of storage plummeted. After I had spent an epic month re-ripping my entire music collection with each CD copied in its entirety, lots and lots of songs that I’d owned for years but had completely forgotten about suddenly reappeared in my library.

(“Well, what do you know? The Specials recorded other songs besides ‘A Message To You Rudy,’ ‘Do The Dog,’ and ‘Little Bitch.’ Huh.”)

The weird thing is, “Monkey Man” is exactly the sort of bouncy ska song I like. So why didn’t it make the first cut? Who knows. I used to buy 90-minute econo-tapes and sometimes my choices weren’t a matter of “Which song on this CD speaks to me most directly?” so much as “Is there a song that I can tolerate which happens to be no longer than…(he times the remaining amount of tape with his Casio Databank watch)…two minutes and twenty-one point three seconds?”

For un-gifted musicians, the song is made even more lovely by the fact that it only contains three chords. Just now I have reached for a nearby ukulele (yes, there is a nearby ukulele; this is an office, need I remind you?) and looked up the tabs for “Monkey Man.” Awesome: I can certainly handle a song with three chords, especially when I’ve already got two of them (F and B-flat) in inventory.

Yeah. Clearly that’s a practical joke. It’s like a “Twister” game for your fingers. I can’t hold down the top three strings of that inside fret with my third finger without accidentally touching the bottom string underneath it, and ruining the chord.

Wait, what am I worried about? Every time I’m supposed to strum the E-flat, I can just shout “Oi!” and hope nobody notices.

I mentioned that the 1979 version by The Specials was the original. Yes, that’s true…as far as I’m concerned. The first version was written by Toots Hibbert and recorded by reggae band Toots And The Maytals in 1969. The Specials got it the way the British historically get anything: they annexed it, just like their forefathers took custody of the Elgin Marbles for the relics’ protection and preservation, and got much of 19th-century China addicted to opium to make sure that the decadent citizenry would start every morning feeling as though they had a sense of purpose and motivation. They’re a charitable people by nature; it’s time more people understood that.

The Specials didn’t have a navy but they showed some of that Dunkirk spirit and they did what they could. They siezed “Monkey Man,” installed a military governor, and then declared it to be an joyous, uptempo number. It’s a rare case where British imperialism actually worked out for the best. To my ear, the Maytals version just sort of spools out onto the floor and lays there. It’s the crushed velvet version of the song, compared with the Specials’ “crushed beercan” recording.