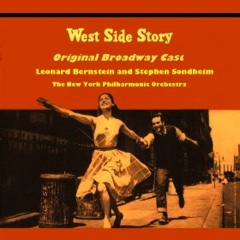 Stephen Sondheim, Arthur Laurents, Leonard Bernstein, Jerome Robbins. Back in 1955, was it considered a really, really big deal that these four men were working together on a musical?

I remember how excited I was as a kid when I heard that the next season’s cast of “Saturday Night Live” would include Christopher Guest, Martin Short, Harry Shearer, and Billy Crystal (adored by me for National Lampoon records, SCTV, Spinal Tap, and standup, respectively). Was there a similar sense that “West Side Story” couldn’t fail to be something special? Or that it couldn’t fail, period? When Hal Prince signed on as producer, did that up the ante even further?

I imagine the level of tension that everybody else in the show must have felt. If the show failed, nobody in the theater community would be thinking “Oh, well, what do you expect from that hack, Leonard Bernstein?” No, they’d be looking elsewhere for the Weak Link in the production. Even the guy in charge of cutting makeup sponges into little triangles for Chita Rivera probably felt the need to elevate his game.

Not all of these guys were at the tops of their careers at the time, o’course. Sondheim’s beard probably smelled of Top Ramen. Fifty years on, however, it seems like an incredible lineup. If Bill & Ted’s Excellent Adventure had required the boys to assemble the greatest men from the entire history of musical theater, this would have been a very credible list of luminaries.

Bonus points for being able to pick them all up in just one stop; points taken off for stopping by sometime after opening night, when none of them were speaking to each other. If the stories are to be believed, Jerome Robbins’ presence would have led to some profoundly awkward moments in that cramped phone booth. The kids’ big report to their whole class would have featured an energetic musical number entitled “What The F*** Is This ‘Conceived By…’ S*** In The Credits, Jer?!?”

It’s tough to listen to “America” and stay put. If you can resist the urge to clap along to the habanera bits (the CLAP-clap-clap CLAP-clap-clap CLAP! CLAP! CLAP!s), and to play air conga and air cowbell where appropriate, you’re…actually, I think that’s how they test for some sort of neurological or hearing disorder. The doctor takes you straight from the examination room into an MRI machine.

You can be forgiven for keeping quiet during the girly yips. As for the Whitey McWhiteperson-style attempts at Boricua vernacular and speech patterns…yes, I suppose “oh dear” sums it up. I know little more about that culture than this can of Diet Dr. Pepper at my elbow but even I have to wonder if “San Chhhhooo-wan” was the result of careful, sensitive research. But that’s nitpicking.

What a wonderful document this recording is. Live theater is a frustrating medium. The window for seeing the definitive production of “West Side Story” closed more than a decade before I was even born. For each individual show there might be some films from individual numbers featuring the original cast, but usually they’ve been cut down for the time constraints of a TV appearance and the space limitations of a TV studio. A show might get lucky and become a movie musical, but its original perfection never survives the translation. The movie version of “America” is about racism in the mainland US, instead of poor living conditions in Puerto Rico.

It just bothers me that this phenomenal work is simply gone and can never be retrieved. Nobody needs to describe how phenomenal “The Godfather” was. Just pop it into a Blu-Ray player and you’ll see it exactly the way it was when it was first presented. A little smaller, fine, but with way better projection and sound. A live musical lasts only as long as the echo in the theater where it’s performed.

Also better than nothing: the few shekels that tumble into my Amazon account whenever you click on one of these links and then buy whatever it is you were going to buy anyway. My nieces and nephews are hoping for X-Boxes for Christmas this year instead of paper-bag hand puppets. It’s all up to you at this point.