Late yesterday, Nuance released an iPhone edition of their Dragon NaturallySpeaking software. What wonderful news! Dragon is the gold standard in text-to-speech. You say it, Dragon turns it into text.

Having it on the iPhone seems like a strong win. I’ve no complaints about the iPhone’s virtual keyboard. I can type faster on my iPhone than I can with any physical mobile keyboard. All the same, the fantasy of dictating a lengthy email to a speech-to-text utility instead of tapping the whole thing out sent me rocketing over to the App Store to download my free copy.

Minutes later, after I’d installed the app and given it a few quick sentences, I was impressed. The software only seems to have a few drawbacks:

1) It only works in short bursts of text. You can get in about two sentences before the app has to stop listening and start transmogrifying what you’ve said. But you can then go ahead and speak the next bit, and then the next bit, and so on until your entire thought has been converted from synpatic traffic to readable text.

2) Its user interface and feature set are a bit spartan. You can edit what’s been transcribed and then you can dump the text to an email, SMS, or the clipboard. But that’s about it.

3) Dragon Dictation For iPhone is not a Keebler cookie: the elfin magic is not baked right in. Instead, what you say is transmitted to Nuance’s server, converted via remote software, and then sent back down to the app. So you’ll need a WiFi or mobile internet connection.

It was a good start. But then I tried it out with something a little more ambitious. When I read it the first page of one of my favorite books I uncovered a fourth, and truly dealbreaking, drawback:

4) It censors what you’ve said.

The harmless page in question was from “Fear And Loathing In Las Vegas.” Dragon calmly and nimbly transmogrified the bits about the drugs and the huge bats and the “Holy Jesus.” But the final two words of the opening graf had become “g*ddamn animals.”

Of course you know what famous piece of literature I had to try next: 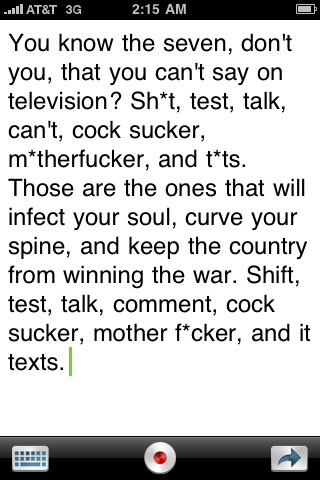 Friends, this screenshot represents my g*ddamned best effort to get the Dragon app to properly parse the spotlight lines from George Carlin’s “Seven Words” routine. The seven naughty words appear twice in this passage. In the final sentence, I simply read them naturally. But when I spoke them in the second sentence, I spoke with the measured tones and eloquent baritone of Frasier Crane, enunciating carefully and confidently, over and over again, one word at a time, coaxing the Dragon to do the right thing and giving the software the best chance possible. What you see there in the second sentence is the very best I could do to get Dragon Dictation to correctly transcribe some extremely naughty dictation.

I was relentless and determined. I was filthy and repetitive. It was if I had wanted to make sure that I’d never be asked to take care of a friend’s expensive pet parrot ever again.

I angled my iPhone so that my “P”s and “S”s woudn’t overwhelm the microphone.

“Test,” said the Dragon, who seemed to be getting a little bit bored with all of this.

My triumph with “C*********” was entirely accidental. I had over-Frasiered the word, pronouncing it as though it was the name of a new model of Mercedes sedan and I was recording a voice-over for an ad that was going to air during the Masters tournament. Apparently, Dragon is perfectly fine with the concept of sucking (the Mets do it all the time, and most of those guys are millionaires). It’s also willing to give me the benefit of the doubt regarding a word that often describes roosters and what you must do with a revolver before you keep the little feathery bastard from ever waking you up before dawn ever again. But when you put those two words together, the Dragon collapses into the nearest fainting couch.

As for the word that refers to a lady’s…ladyparts, I repeated that one so many times that I am now confident that my home has not been bugged by any federal agency. I hope that if any member of law enforcement should ever hear a single man say that word so frequently or attentively in a single 90-second period, they won’t bother coming in through the door. Standard procedure should be to send teams crashing in straight through windows and walls.

And what the hell is the matter with those people at Dragon? They’ll censor the f-word when it appears all by itself. But when this popular verb is maternally compounded…it’s “Mother” that they have a problem with? Really? Oh, dear. Freud has just manifested himself physically. After I get done explaining to him what an iPhone is, and explained why he’s going to have to put out the cigar before he steps onto a public sidewalk, he’s going to want to have a lonnng talk with the good folks at Nuance.

I haven’t spoken to Nuance so I don’t know for a fact why Dragon Dictation is censoring the output of this app. I can take an educated guess that they did it to get the app through Apple’s iTunes Store approval process. Apple presents an image of themselves as John Lithgow in “Third Rock From The Sun,” brilliant and eccentric and fun and free. When it comes to moving apps through the approval process, they’re more like the John Lithgow who banned dancing in his community and tried to get Kevin Bacon run out of town for immoral use of a Foreigner album.

“Hypocrite!” you might shout. “You’ve censored all of these same naughty words from your own blog post!!!”

Indeed I did. I was raised in a humble Puritan fishing colony on the Massachusetts Bay and there are many words that I simply don’t like to use if I can avoid them. I’m also aware that if I use certain words here, I could seriously foxtrot uniform charlie kilo my site’s standing with various “net nanny” services.

Maybe I’m wrong to censor my stuff. But it’s my censorship of my blog post, and my decision to make. I’m perfectly entitled. But an app — even a free one — hasn’t earned that right. Less than an hour after I installed Dragon Dictation, I ship candidate.

Damn, I had the TV on while I dictated that. Let me try again:

I shipped can do it.

Damn. Okay, well, it’s no longer on my iPhone, anyway.

I’ll tell you one thing, though. Motorola is a fool if they don’t use this in an upcoming Droid ad. On the iPhone, you can’t even use the word. But a phone that runs the Android OS approves so strongly of the concept that it’ll even help you find it in the nearby vicinity.