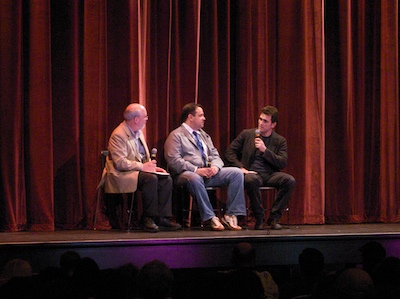 Photo: Moderator, director Rod Lurie, and Matt Dillon discuss “Nothing But The Truth.”

Day Four of the film festival. Is it common to start to imagine universal themes connecting each of these films? After seeing and liking “Frozen River” yesterday (despite its flaws) I’m regarding “Nothing But The Truth” as a film in the same vein. Two strong women, who…

…Okay, and that’s pretty much the end of the similarities. I suppose the idea of seeing two films that feature two strong, independent female leads is freakish enough to seem like a binary miracle, like the Red Sox (1) making it to the World Series and (2) not screwing it all up in Game Seven.

“Nothing But The Truth” is totally not about the Valerie Plame Affair. See? There’s a disclaimer at the top of the movie stressing that the story isn’t based on real events. Just like the one at the top of that episode of “Law & Order” with the manchild-like pop music superstar who invites sick kids to his amusement park-like estate and is accused of acts of profound impropriety.

The story is about a Washington reporter who prints a story “outing” a political writer’s wife, an undercover CIA agent, and the aftermath to both women as the Justice Department tries to force the reporter to reveal her original source.

But the performances transcend your familiarity. I’m a little surprised that this film apparently didn’t make it past the festival circuit. With other movies you can sense that the subject is too esoteric, the potential audience too mysterious, the movie itself too rough and unpolished. For lack of a better word, “Nothing But The Truth” runs like a real, bona-fide “release it during November, with the rest of the high-profile dramas” flick.

As with other movies I’ve seen at EbertFest, I liked it but was left unsatisfied. It simply runs on for far too long. The reporter passes time in prison, and we pass it along with her. In the meantime, the positions and motives of other key characters (I’m thinking chiefly of Matt Dillon, as the special prosecutor with boundless energy for keeping the reporter in prison) are mostly left incomplete. The Special Prosecutor is an absolute hardass. But why?

I should mention that the identity of the reporter’s source seemed obvious to me early in the story and yes, I was correct. Was I merely impatient for The Big Reveal? Maybe. I don’t think I was. I’m a huge fan of 1970’s episodes of “Columbo” and there, you know who the killer is in the first ten minutes. Instead, you’re keen on seeing how the story plays itself out; that’s due to the extreme skill of the storytelling.

Seeing so many movies in such a small span of time makes me realize that I prize elegance in a screenplay. Is there a simpler creative solution to a dramatic problem? Is the story enhanced by concealing information instead of revealing it?

Chiefly I want the filmmaker not to screw around. “Nothing But The Truth” has lots of that, broken up by the occasional spinning of wheels. It plays with several ideas but leaves the best ones on the table. Is it a character study, in which we get to see how two different women are effected by the publication of this story? It looked that way…until the CIA operative was shot and killed by a random nut halfway into the story.

Just at the juncture where her story was about to get interesting, too. Her life is being torn apart and she’s quit her job, sensing that her own co-workers don’t even trust her. She has a big problem on her hands — her life is being taken away from her and she feels betrayed by those whom she’s trusted. But she’s been trained to find independent, assertive solutions to problems.

So there goes all of our investment in that character. A damned shame. The film clearly invested a lot in her, as well; it’s as if the actor suddenly dropped dead from a heart attack in the middle of filming and they suddenly had to throw out the rest of her story and scramble to come up with a new direction for the movie.

Okay! Well, then surely the rest of the story will be about the reasons why the reporter is defending her source so relentlessly, and at such great personal cost?

It actually plays out more like a “Frontline” documentary. She waits in jail. An appeal is filed. She waits to hear the results. Her attorney tries to have the case heard by the Supreme Court. She waits to hear how that goes. Her editor tells her how public reaction is playing out. She waits to see if that puts more pressure on the prosecutors.

And all the while, the filmmaker was sitting on the identity of the reporter’s source. The reporter had to conceal it from the prosecutors. But the identity alone explains everything about her behavior and the full dimensions of her ethical dilemma. It’s revealed in literally the final shot of the movie, which is like handing me a map and a compass at the end of the journey instead of at the beginning, when they could have been useful to me.

The journalist’s ongoing sacrifice isn’t nearly as meaningful to me if I have no idea what’s at stake. It’s a massive source of drama and tension. Why the bloody hell did the filmmakers just leave it on the shelf? C’mon, Mr. Lurie…you can trust me. I promise that I won’t jump in through the screen and tell Matt Dillon or the judge or nobody.

(See? I’m not even telling the readers of this blog! Have you left Urbana yet? We should get a coffee and talk out the problems in our relationship before things degenerate further.)

For that matter…why didn’t the reporter at least reveal the name to her superstar attorney? Understanding the full dimensions of her problem would have opened more options to him. I’m not satisfied that “prosecutors keep her in jail long after it’s clear she isn’t going to reveal her source and the courts emphatically defend the government’s rights to go after her” is a logical answer.

But to hell with the reporter and her legal case. I wanted the reveal to happen earlier because that sort of additional tension would have been catnip to an audience. It’s tough to form an emotional connection to the abstract principle of a free press. Put a name and a face on the person who will suffer unbearable hardship for life, and you’re finally cooking.

These creative decisions are baffling. They had tension between two strong leads, and they threw that away. They had drama with the actual identity of her source, and they refused to use it in the story.

“Nothing But The Truth” is made up from top-quality ingredients but they’re in the hands of an Olive Garden line cook. This dish is edible, even palatable. But nothing like what it could have been.

(Hmm. Y’know, I bet it’s bitchy comments like that one which cause Rod Lurie to not answer my emails. So clearly there’s fault on both sides of this relationship.)

2 thoughts on “EbertFest: “Nothing But The Truth””