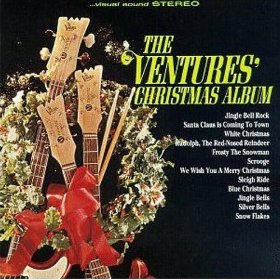 Standards and covers. I love ’em. I love the idea of throwing the exact same piece of music at several different artists and seeing so many different solutions emerge.

It’s particularly keen with a tune like “Sleigh Ride.” You’d think that the world had heard enough of this song, but nope…singers and bands keep finding new things to do with it every year.

Not all bands, of course. Some groups will just crank out a cover without putting their own stamp on it. Result: the song sinks without a trace, like a spoonful of  Minute Rice on top of a bowl of Uncle Ben’s.

But others use this as an opportunity to answer the question “As an artist, who are you, and what brought you here?”

“The Ventures” is a band record nothing but instrumentals. And no wonder. Why would you allow vocals to cover up this kind of guitar playing? They’re synonymous with virtuosity. They’ve reached that stage of technical perfection where they can make their instruments do exactly what they want it to do at any given time. You never get the sense that they would have liked to have put in a fill riff that goes bing-bing-TWANNNG-twang-thummmmm right there, if only they knew how.

The only spots in a Ventures track when they’re playing in a simple and direct manner are when the band thought “We need a slower passage right here, to set up the next run that’s coming” or possibly “I can use these forty seconds to plunge my right hand in a bucket of ice water and get some relief from this excruciating muscle and joint pain.”

These boys attack their guitars as though they caught it in the backseat of a Chevrolet with their sisters. Surely this took a physical toll on their knuckles.

Of the overall remarkability of their version of “Sleigh Ride” I can only state that they have won an amendment to Ihnatko House Resolution 28.281.R, which states that “All approved recordings of ‘Sleigh Ride’ must contain a simulacrum of a whip-crack at the end of the line ‘Giddyup, giddyup, giddyup let’s go’.”

All the same, they knew not to press their luck: sleigh bells are indeed jingling rhythmically throughout. Though I reckon that this track is sufficiently awesome that if they’d “forgotten” to put it in, the DA would be encouraged to find some technicality, and decline to prosecute.

Why yes…the track is available from Amazon MP3, as an unlocked, high-bitrate MP3! And well, if you insist on my embedding my Amazon Associates link, well, who am I to deny your request? Here you go, hon:

iTunes appears to have it as well. You can purchase it from the aforementioned store via this link.

But will that fill that gnawing void you’ve been feeling for the past eleven years? Will it?

It’s time to put away such things and move on. There’s only one thing that will help to spackle that emotional gulf. You know it and I know it. You must face the golden, unfolding down and promise to only purchase your music in such a way that it puts me closer to getting a free lens for my camera or something else cool.