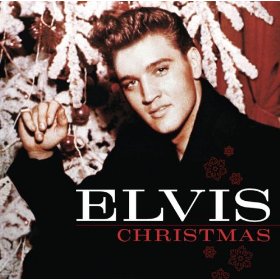 Santa Claus Is Back In Town

Amazon MP3: Santa Claus Is Back In Town

Well, let’s be adults and acknowledge this right at the top: this is a song in which Elvis promises to visit each one of his female fans on Christmas and have sex with them. Possibly right on top of all of her visiting relatives’ coats there on the bed.

There. I said it and the world didn’t end, did it? Aren’t you glad that it’s all out in the open? Your 18-year-old daughter, home from her first semester in college. Glancing at the front door all during dinner on Christmas Eve with an eager anticipation you haven’t seen in her since she still believed in Santa Claus.

Oh, a man in a red suit is stopping by tonight. Count on it. Except it’s close-fitting leather, not flocked velvet. And the “elves” are two muttonchopped walls of muscle who wordlessly station themselves at the bottom of the stairs after “Santa” leads your giggling daughter up to the second floor, and who offer to trade a crisp $100 bill for the film in your 11-year-old son’s camera.

We who were born about thirty or forty years too late for this stuff are made to believe that American men feared this scenario far more than the idea of atomic war or Communism. They imagined that Elvis had a huge, hangar-like command center dominated by a map of the United States, with red light bulbs marking the homes of daughters he had yet to have sex with, and bits of string plotting out the most efficient and economical routes between them.

It seems like such an irrational fear. And yet a song like this did nothing to reassure these crewcutted fretters. For such men, the only reassuring sign to be found anywhere in “Santa Claus Is Back In Town” is the fact that there are no suggestive references to Elvis’ South Pole, candy cane, etc. So maybe (quote) “Santa Claus is coming down your chimney tonight” (unquote) could be taken at face value.

Sorry, but…no. Elvis so totally had sex with your daughter. C’mon. She had that big, stupid grin on her face all the way to New Year’s. Do you think she liked the Paint-By-Numbers Last Supper you gave her that much?

If it’s any consolation, Elvis left her with an enviable library of high-definition memories that helped her to sail through ten years’ worth of efficiently-executed marital coitus. Don’t those three adorable grandkids more than make up for your need to send your fist through the wall every time “Viva Las Vegas” comes on  TV?

Buy the track from Amazon MP3. I get a small kickback and I’m told that am Amazon MP3 purchase will prevent your own daughters from having sex with The Game.

Amazon MP3: Santa Claus Is Back In Town

Or, you can buy it from iTunes and just take your chances.

1 thought on “Amazon Advent Calendar Day 14: “Santa Claus Is Back In Town””