Lunch has been eaten, 32 minutes of the Ricky Gervais HBO standup special has been watched. Let’s see how the render went.

Cool. I’m really impressed. I thought “I want the ‘driving in the car’ me to miraculously start talking as soon as the ‘voice over’ me stops” and by golly, that’s exactly what happens in the video. Even though I recorded those two elements completely separately.

I do want to the v/o to add an additional comment as soon as Car Guy resumes his silence. I’ll try the voice-over tool this time. 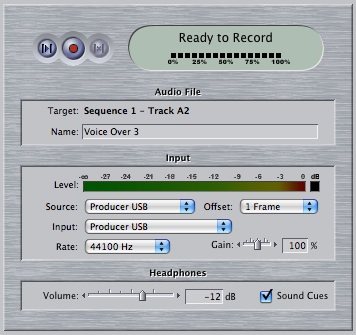 Cool…that was simple. It counted me down and everything, and when I clicked Stop, I could do some fine-tuning to make sure it came in precisely where I wanted it.

It didn’t precisely match the audio levels of the v/o I recorded in Quicktime Pro, though. Made a half-hearted attempt to adjust the new v/o manually but then simply tabbed back into QT, recorded those few seconds, and then dragged it into the timeline. Couldn’t have been simpler.

(I can see myself using the voice-over tool a LOT. I know you can add voice to clips in iMovie but it seems a lot more organic in FCE.)

I did have to re-render before I could see how the new audio integrated into the clip. But there’s an option for just rendering anything that needs it, so it was quick and painless. Like my recent tooth extraction, except Final Cut didn’t hand me a prescription for Vicodin afterwards.

I realize that I’m sort of doing this the wrong way. You’re supposed to throw together a rough cut and then start adding audio and transitions and text and whatnot. That way, you don’t even need to do a render until you’re nearly done.

But now that the intro is over, I need to start the actual edits. I’m a little bit stuck, but it’s for a good reason: I’ve seen enough of these tools to know that I can now create damned-near anything I want and I don’t know which choices will make for the best video.

Like, how best to do the “comparison” shots? In iMovie, I simply replayed the same shots over and over again, one after the other. In Final Cut Express, it’s no trouble to do a split-screen.

I don’t know if that’s the best choice. I think I ought to start with just a rough assembly of the “single camera” sequence of shots. Then I can replicate it from the Zi6 clips. At that point, I’m free to proceed however I want.

I’ll worry about that later.

I decide to use the car door slam as my slate, to sync up the video between the two cameras. Easy as pie to set the start points of both videos. Drag the first vid into the timeline, drag in the second and tell FC “please overlay this”…easy.

Oh. I need to be in “wireframe” mode. When I saw it in the View menu I imagined that it only came into play when you’re importing…well, 3D models or something. But by cracky, now the video frame has handles, good ‘n’ proper. 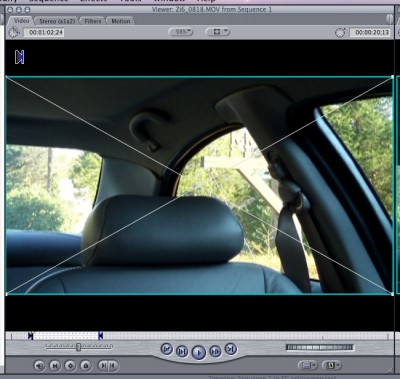 Much further twiddling happens before I have one of those “Oh, it’s actually quite simple; the problem is that I’m an idiot.”

You can crop the frame by dragging the corners, or you can click into the “Motion” tab, go to the “Crop” parameter, and type in the number manually. You can move a frame around the screen the same way: mouse it, or just type in a number.

I had a hard number in mind for the crop (please take 25% off of either side) but didn’t know how to translate “please move the center of the frame so that it’s at the exact left (or right) edge” into a number. I overthought it.

Simple: just type a number for the cropping, and then slide the centerpoint manually.

This is a good example of the sort of thing I confront each and every time I test a new piece of tech. I’m perfectly OK with the realization that I’m just a damned idiot. Okay, correction: the reminder that I’m an idiot. It’s frustrating when you can’t make something work but when you find the answer and realize that it really did make some sort of sense all along, your initial frustration shouldn’t be held against the app.

I really do give these things plenty of opportunities to prove that I’ve got some sort of a bent chromosome or something. When I finally say “This thing is a piece of crap,” or “Whoever designed this didn’t know what the hell he was doing,” my arrogance is very hard-won.

I still don’t know what the numbers mean for “center.” If I type in “0” is that an explicit or a relative number? Would “-25” mean “to a point 25% to the left, relative to center” or would that mean “25 pixels away from Cartesian zero”?

At any rate: I won’t see the results until I render. Though the preview looks promising. 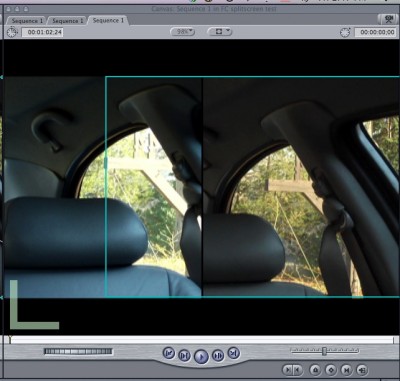 Smoke if you got ’em. “About 7 minutes left…” for the render.