Already I’ve done one thing that’s impossible in iMovie: combine two video clips in the same frame. I can slap a “talking head” video box over an otherwise bland tourist panorama, or when I’m doing a drive-and-talk I can slide in a subtle little corner thing showing you what I’m talking about…on and on.

Good, good. Let’s go for Two Impossible Things before suppertime: multiple text items, placed in an arbitrary fashion. I want to identify the cameras responsible for each side of the screen.

Another example of something that’s pretty much dead-simple, but first I had to look something up. No obvious “add titles” tool or button or thingamawhassit anywhere in Final Cut’s UI.

Ah. Okay, once again it’s a tool that I can’t figure out until I go away and Google or check the manual, but once I have the answer, it makes sense. Text tools are in an “Effects” tab inside your project window. The project window contains video files, sound files, other sources of content…it sort of figures that as something that generates content, it’d be in there.

(A little button with a text icon in it. Visible. Anywhere. Y’know, Apple, that would have made sense, too…)

Okey-doke. Easy as get-out. Move the playhead to the spot where the title should appear, click the “Text” item, which you’ll obviously find in the “Text” folder inside the “Video Generators” folder inside the “Effects” tab. Drag it into the preview viewer, just as you would a video clip that you’re preparing for insertion. 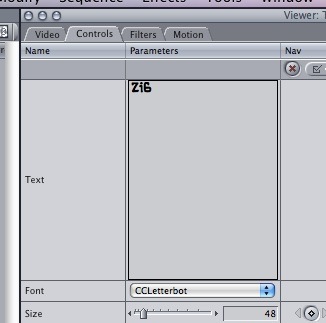 Click on the viewer’s “Video” tab and you see that the tool has automatically placed the text where you told it to. I used the plain “Text” generator, which assumes you just want to splat it in the middle of the frame. Simple business to just drag it to the lower-center of the “Kodak Zi6” half of the screen.

Repeat for the Mino. Huh? The text has disappeared.

Ah, simple: looking in the timeline reveals that the “Flip Mino” layer is behind the video layer when it ought to be out in front. Drag, fixed.

Hmm. The “preview” I see here looks…ragged. Is it just giving me a quick render for position? It’ll look fine in the end product, right?

Need to render this out. I read comic books, return, and find that it all looks good.

Now I’ll export this as a Quicktime.

Once again I spot a holdover confusion from iMovie. I can export the movie as a Quicktime. Or I can export it, “Using Quicktime.” Two separate menu items, same apparent function. This needs to be made more clear.

The standard QT exporter is more familiar to me, so that’s what I go with (“Using Quicktime”). I select 720p settings, click the right buttons and…

Blimey! This will be ready in minutes? I know it’s just a 90 second clip, but “burninig” a ten-minute 720p project with these same H.264 settings in iMovie was almost an overnight endeavor.

It’s taken the original 16:9 aspect ratio, letterboxed it to 4:3, then converted THAT to 16:9 HD aspect ratio by squashing it.

Oh, and it’s downsampled it from 720p to standard-definition, too.

Now I have a brand-new worry. I didn’t see an opportunity to tell Final Cut “Look, Skeezix: I’m doing HIGH-DEF editing. AYTCH-DEE.” I thought it had gotten the message when I started importing HD clips. Must I now worry that all of my content has been converted to this crummy state? Must I begin ALLLLLL over again? 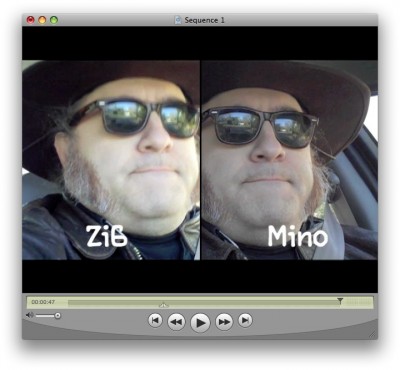 Good. In the sense that “I intended to do this and easily got Final Cut Express to do what I wanted it to do.”

But now I can’t go back to my “real” editing project until I figure out why this is in standard def, and successfully export an HD clip in 16:9 aspect ratio. Damn and blast.

I seem to have found it, inside “Easy Setup.” Yeah, right…”easy”: 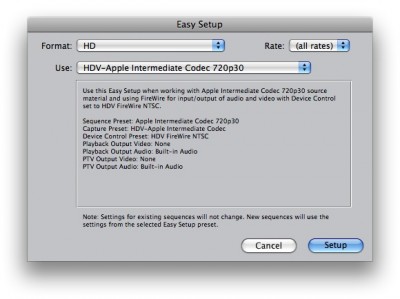 Okay, I’m willing to score this one as an Apple failure. I’m apt to use this app to edit all kinds of things. Is Apple seriously thinking that I’ll have to edit EVERYTHING at maximum 1080p definition — even the crappy little VHS videos I’m transferring in — just to retain the ability to edit ANYTHING in HD?

Is Apple seriously saying that the crummy consumer-grade iMovie ’08 is smart enough to think “Oh, he’s importing HD video…I should edit it as HD, then. Or at minimum, ASK” but Final Cut Express is just a cod-slapping moron?

Rrgh. This bit is needlessly complicated.

Now I don’t know if I can even use any of the stuff I’ve already put together in the “real” project. I’m looking through the UI and the manual, but I can’t find any place to say “See this existing project? With all of the HD clips? AYTCH-F***ING-DEE. RIGHT F***ING NOW.”

Okay. Dinner. I really need a break from this. What an idiotic thing to be dealing with.