“In the grand scheme of things,” a self-effacing Oscar winner once said, “an Academy Award means very little.”

He had a point. Doing something that you’re truly proud of is its own reward. Beyond that, an acknowledgement from fellow professionals whom you respect is more valuable than the actual statuette itself. 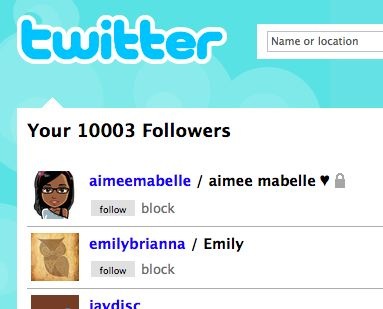 And I’m proud to say that I got my 10K honestly. I have never Dane Cook’d my numbers by begging my audiences to Follow me. That’s 10,000 people who made their decisions spontaneously.

I am slightly less proud to say that I’ve been looking forward to reaching this (again, quite meaningless) mark for quite some time.

I think I was somewhere around the 6K level when I thought about how cool it’d be to win The Big Rollover. When I broke 9K early this summer, I started sort of wondering when I thought I’d hit it. ” I reckoned it’d happen shortly before Labor Day. My guess wasn’t far off.

The low point of my quest? Well, there was the day that Twitter got a hold of a bad clam or something and I suddenly lost 6,000 Followers in one evening. Also known as the day I realized that getting 10,000 Followers meant more to me than I thought.

(AKA the day I learned how to patch a sneaker-sized hole in a piece of office drywall.)

Those 6,000 Followers did come back a day later. Just like a housecat who scoots out through the door when you’re carrying in shopping. I’m just happy that they didn’t come back with 6,000 dead mice and birds in their mouths to drop at my feet. I bet Leo Laporte wishes he could attract my class of Follower.

A long time ago, I “gave something back” to the Twitter service by establishing, on behalf of Twitter.com, that the service will treat you to a diner order of strawberry pancakes every time you get another 1000 Followers. “They’re still setting up the infrastructure for this,” I assured my Followers. “Just keep your receipts.”

And indeed, the promise of free pancakes gave me yet another reason to look forward to a “rollover.” At the 3K, 4K, 5K, etc. mark I religiously went out for breakfast and dug deeply into the Cakes of Victory. I have now declared that with every 10,000 Twitter Followers, the company will treat you to…

Yes, it’s a full day of dinering: Twitter will pay for Breakfast, Lunch and Dinner in three separate diners in three separate New England states. You may choose any three diners for your Triple Crown, though all dining and travel must be completed in one day. Remember, save those meal receipts, plus the paperwork for any gas or toll expenses.

I’m serious about the Triple Crown. In a couple of weeks, I am indeed going to do a one-day, three-state diner roadtrip. It’s been a tough month and I deserve a day of serious fun. Itinerary to be posted as soon as I decide on one (O’Rourke’s Diner in Middletown, Connecticut is the presumptive nominee for the Lunch stop).

Do join me for one of these meals if you happen to be nearby.

I’m also serious about Twitter paying for it. This is an astounding and generous offer and a brilliant piece of “viral” marketing. The folks behind Twitter are geniuses for coming up with it. I can’t wait to tell them that I’ve decided this has been their policy all along!

And if they try to chisel out of the sacred promise that they are not yet aware that they’ve made…well, just tune in to “Judge Judy” for the fireworks.