Welcome to sunny Boulder, Colorado. In the Rockies, they have 31 words for snow; “Sunny” means “a light, steady sifting of rice-sized little puffs that make the deal much more picturesque without inconveniencing pedestrians.” 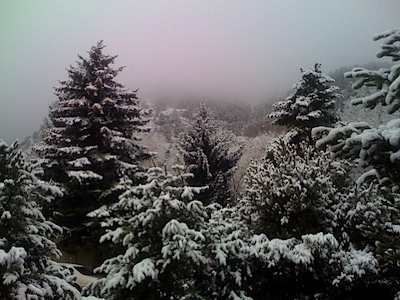 Enjoying a bit of a lie-in. Yesterday I celebrated the beloved tradition of leaving at 5:30 AM for a 9:10 AM flight on no sleep, you see. The Bob McKenzie Algorithm has gotten me to many an early-morning appointment and by now, I trust it without question.

Window seats on both legs of my flight to Denver allowed me to sleep and took some of the edge off of my fatigue, though I was mightily thwarted on the second flight. I didn’t have access to Twitter while I was in the air, of course, but over the course of those two or three hours, I instinctively reached for my iPhone to post 140-character bagatelles such as

Montana Tweeters: if you have a spare mattress or two, could you set them out in the yard? Because this kid in the seat next to me is the reason why the word “defenestration” exists.

If I had thought to tuck a Ziploc baggie the size of an 18-month-old into my carry-on, this flight would be SO much more pleasant right now.

Whenever the kid wasn’t crying, he was trying out a new bit of the Annoying Child Passenger act that I’d never encountered before: he kept tapping me on the arm and on the leg and kept trying to pull the pens and papers out of my shirt pocket. I made the usual non-confrontational comments to the kid’s mom — you know, observing the sort of limits that are in place when you’re spending two hours literally belted down next to the person you’re in conflict with — and got the least-encouraging response possible:

“Oh, Justin is so curious, isn’t he? He loves to explore his environment!”

The kid’s name wasn’t Justin but you know what I mean. He is the universal Justin, the spot on our nation’s CAT scan that causes your doctor to immediately order some more tests. If Justin had grabbed an air marshal’s gun and shot a flight attendant, her mom would have proudly beamed that Justin was murdering way above his grade level.

So I hadmy silicone earbuds in (the kind that shut out all cabin noise) and slept fitfully. I was able to ignore Justin’s tapping nearly until the end of the flight, when intense thumping really required that I have a word with Mrs. Justin.

I prepared my most intense Glare of Danger but quickly re-holstered it when I opened my eyes and turned my head and discovered that it was the flight attendant, urging me to turn my iPod (the hell) off and put up my (damned) tray table already because we were about to land.

I’m here for the Conference on World Affairs, naturally. There’s only one thing on the Conference agenda on Sunday, and it’s a reception for the speakers. I was dead-tired but it’s a good chance to meet a lot of people whom you’re probably not going to get much chance to mix with during the week (oddly, they tend not to put me on the panels about the impact of the religious right).

Was picked up at the airport by student volunteers and taken to a very nice house where I’ll be staying for the week. Unpacked just enough to verify that I hadn’t left anything at home and then fiddled with the MacBook Air long enough to verify that nope, I didn’t configure “Back To My Mac” properly on my desktop iMac.

Damn and blast. It’s one of Leopard’s greatest features but it’s not quite done yet. Getting it to work on a local network is a piece of cake (barely more difficult than enabling file sharing) but when you try to make it work over the Internet, you need to do lots of fine-tuning. The trouble is that Back To My Mac does precisely the sort of thing that your home firewall is meant to prevent.

These aren’t simple problems. But one thing that Apple could do is provide a simple utility for checking the WAN connection. It worked fine at home, and that’s as far as I could test it.

The bummer here is that I was counting on Screen Sharing to give me a secure tunnel for blog posting while on the U of Colorado campus. Oh, well. Back to stopgaps. Right now I’m using copper socked into the house router.

Got in a good nap and showed up at the reception when it was in full swing. There are folks here whom I’ve been hanging out with for years and years and it’s v.swell to see ’em all again.

Among these: a rocket man who’s working at Blue Origin, Jeff Bezos’ space program. Certainly favorite of the many Crazy Billionaire Human Spaceflight initiatives, and that’s probably because Bezos is keeping his big yap shut about what they’re up to, for the most part.

Blue Origin doesn’t feel like a PR push for Amazon. It feels like an actual space program.

The infuriating bit, of course, is that Tim can’t talk about anything he’s doing. They take security so seriously that I can’t really even joke with him about it without making him feel uncomfortable.

“So that means you don’t press him for info?”

No, no. Last night I was actually just curious to know that the work was still interesting and that he was still having fun, and received enthusiastic affirmatives on both points.

There are a few new people that I’d like to meet this week. Mike Farrell? Yes. It would come down to a dumb, fanboyish “I watched M*A*S*H, like, every week!” thing but I bet he’s the sort of classy guy who deals with TV fans by punching them in the torso instead of leaving a mark on the face. Jello Biafra? DEF-initely. He was pointed to me at a table but I froze on the basic “Mister Biafra? Jello?” question. I’ll get to him.

I did indeed get to meet James Randi, who was damned charming and put me at ease right away. I wished him a happy Not Houdini’s Actual Birthday But The One He Had On His Passport (April 6, surely you’ve seen the displays at your local Hallmark Gold Crown Store?) and we had a nice little chat. Cool. I’m on a panel with him tomorrow and I accomplished my main goal, which was: not to say or do anything to cause him to climb onto the stage on Tuesday, eye me cautiously, and then move his chair farther away from mine.

Okay. Enough lollygagging. I can enjoy a nice mile and a half walk to campus, followed by lunch (featuring my favorite style of cuisine: complimentary), taking in a panel…and then speaking on the subject of “Things We Wish We’d Learned In College.” I don’t have my complete list yet but I can predict that “the notion of compound interest” fill have a prominent spot.

Once again, here’s a link to my complete schedule here at the Conference. All panels are open to the public.