I keep forgetting to post this, so I thought what the heck: this time I’d remember. The panel schedule for the Conference on World Affairs at the University of Colorado at Boulder has been up for a couple of weeks. Here’s a list of all of the panels I’ll be participating in.

A few immediate reactions are inevitable. In no particular order:

1) I’ve got kind of a light schedule this year. I think during my busiest year, I wound up speaking on 12 of these panels. Usually, I’m on eight or nine. This year…six.

I’d be happy to pitch in on more panels if they ask me, but I ain’t complaining. All to often, there’s a marvelous panel going on and I’d love to attend just as a spectator…but dagnabbit, I’ve been counter-programmed and I’ll be spending those 90 minutes speaking instead of listening. This year, I ought to be able to enjoy more of the Conference from the back of the room.

2) I’ve got a nice little lineup, methinks. I’m pleased that the conference organizers have chosen not to call my bluff about what I insisted that I would do if I ever had to speak on another panel about Blogging. I would have needed to obtain a box of signal flares and I have absolutely no idea where I’d find a marine-supply store in mountainous area like Boulder/Denver.

It’s a mix of topics that I’m very comfortable with, topics that encourage me to take a couple of big risks, and at least one panel in which I expect that any surplus ego I might have picked up from a week of people at Macworld Expo telling me I’m fabulous ought to be filed down and countersunk quite cleanly.

I’m thinking specifically of the panel in which

3) I will be speaking on the subject of digital actors, alongside a four-time Emmy Award-winning executive producer of “The Simpsons” and a visual effects and dynamics programmer for Digital Domain who’s won an Academy Award. Twice.

I predict that this is the panel in which I will be introduced solely as a guy who converts old Macs into aquariums. I also predict that I will choose to speak last, and that I’ll spend my ten minutes teaching the crowd how to fold a single sheet of paper into a cube without making any cuts or using any glue. “Play to your strengths, kids,” is the message here.

4) As usual, I sent the Conference about a dozen ideas for panels (as requested). They actually put two or three of ’em on the schedule…but I’m not on them. No sweat. The field-goal kicker tells the coach “You know what we should do? We should have someone take the ball and just run straight through the defensive line; maybe we’d even score a touchdown or something that way” and that might inded be a fab idea, but the 164-pound ex-soccer player might not be the best man for the job.

5) I came up with a topic that would have bamboozled the Conference into putting me on a panel with James Randi, Jello Biafra, and Mike Farrell, but they were too sharp for me. Damn and blast.

6) The radioactive power of my little Photoshopped portrait endures. I sent them (as requested) my bio and a couple of standard headshots for the conference program. But look at what they’re using: 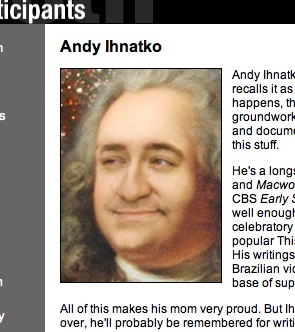 Yup, someone visited Ihnatko.com and they vastly preferred the low-res bit of fun in the masthead to the “real” photos I’d provided.

I think this helps to explain why they never put me on panels about serious stuff, like the increasingly itchy connection between the ATA Alliance and the proliferation of compound-derived weapons in the Congo.

Hell, no, I’m not miffed. I’ve still yet to take a formal portrait that I’m truly happy with…so y’might as well have a little fun. My only concern is that it’s cropped so closely — and the quality of the printing in the program is usually so iffy — that I wonder if the gag will “read” properly. When they see me in person, will they think that I’ve dyed my naturally-gray hair with that Just For Men crap?

This is actually going to be an unusual Conference for me. This must be my tenth or eleventh appearance and it’s the first one in memory in which I will not have to work on some sort of massive project during the week. Usually, CoWA week directly precedes some sort of ungodly book deadline or a massive feature article comes due on Wednesday or something that forces me to run myself ragged…at altitude, no less.

But not this time. I might have a column or two to finish, but that’s no big deal. I’m really looking forward to just kicking back and enjoying a week off (more or less) in a beautiful part of the country surrounded by interesting new people.

All of these panels are open to the public, so feel free to come on by. I shall be blogging, I shall be Twittering, and I shall also be recording and posting my bits of the panels.