How do you define “Hero”? Probably not “a man who spends a couple of hours running a series of routine, unremarkable errands.”

I mean, dammit. In a world in which buildings catch on fire and innocent citizens are routinely held at gunpoint, an average, good-hearted man just can’t catch a break.

But I’m proud to say that I ran the hell out of those errands anyway, expecting neither acknowledgement nor to serve as an example to succeeding generations. I was greatly amused by various consumer items along the way; how fortunate you are that I have both an iPhone and this blog!

Our first Product of Amusement was discovered near the checkout line at the supermarket. Examine this photo for ironic/comedic potential and see if you came to the same answer that as I did: 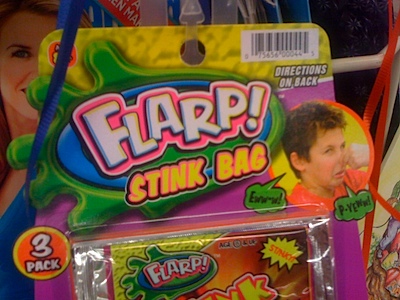 Right: “Most LARPers I’ve seen don’t need any special accessories like this. They manage to achieve this effect solely by stomping around a state park in the same filthy tabard and foam-rubber codpiece they’ve been wearing since bought ’em off of eBay a couple of summers ago.”

I freely acknowledge the following facts: (1) I am supporting a meanspirited and largely-unfounded stereotype of LARPers as smelly weirdos; (2) I have no idea what I’m talking about, as I’ve never met a LARPer to my knowledge; (3) any active hobby that encourages people to engage their creativity, meet and socialize with a diverse group, and make stuff instead of passively sitting at home observing other people going out there and living life is to be praised, not mocked…particularly not from the safe anonymity of a blog; and (4) I’m a bit of a hypocrite, because I enjoy (and often am in awe of) the works of cosplayers who really put their shoulders into it.

At the same time, I must cite Title 5 of the Freak Flag Compact: failure to acknowledge that what you do might seem weird to open-minded, good-hearted outsiders can result in revocation of your permit to operate said flag in public.

Speaking of Hobbies Of Yours That Other Folks Might Not Understand, we have the next product that caused me to giggle inappropriately: 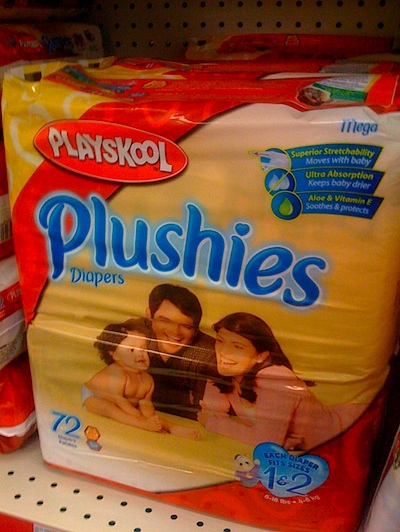 This sort of illustrates why anyone who’s marketing a product needs to run those proposed product names through the ol’ Urban Dictionary first. Just to make sure that the word means what you think it means…and nothing else.

These first two photos just go to show you that the Internet will ruin your perceptions of the pure, innocent world that exists immediately above and to the left of your screen. So let’s just move on to the third and final study in the sequence: 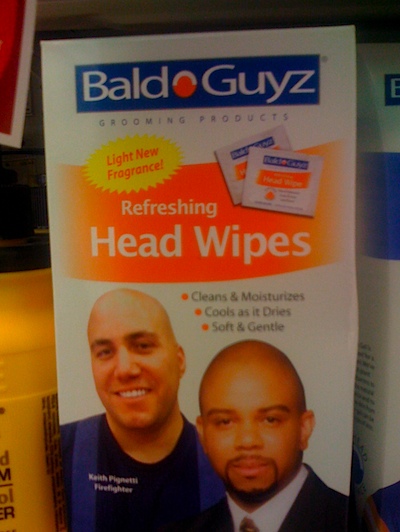 I just stared at this one for a solid moment or two as I struggled to comprehend. I still have most of my original hair and I never had lice as a kid. So I’ve never had a smooth-skinned dome. But what is it about a bald head that might require that you take a proactive stance on the subject of “freshness”?

I mean…what sort of horrific odors or fluids does the scalp excrete that your hair normally holds in? It’s a creepy-enough mystery that I think I’ll be starting a daily regime of Rogaine, just so I can delay finding out for as many years as possible.

My second area of confusion: I was under the impression that completely bald men who took an active grooming interest in their baldness used a big shoeshine cloth instead of a dinky little wet-nap sort of thing.

You know, a chamois a couple of feet long that you grip with one hand each on side of your head? And then you vigorously slide it from left ear to right ear and back again and occasionally snap it, over and over again until you hear that <i>squeaky-squeaky-squeak</i> sort of noise that reassures you “my head is now so glossy and smooth to the touch that there’s no chance that Mr. Benny Hill will chafe his right hand as he slaps the top of my skull at a comically-high frequency.”